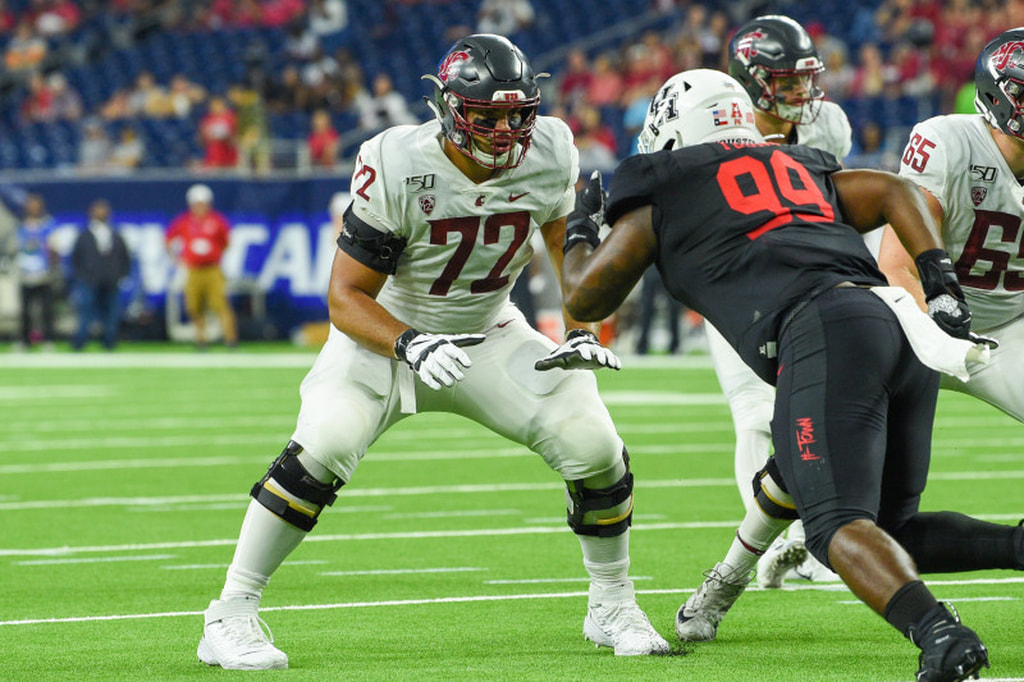 Photo by Ken Murray-Icon Sportswire via Getty Images
Abraham Lucas has been an under the radar tackle prospect for the last two seasons and after a very good Senior Bowl and elite combine that went unnoticed among the stellar crop of offensive line prospects, Lucas has found himself steadily rising up draft boards. At 6'6" and 315 lbs., Lucas brings an exceptional build, tremendous athleticism, and excellent pass protection technique. Abraham Lucas was one of best pass protectors in the PAC-12 in 2021 and his game against Kayvon Thibodeaux showed teams his ability to shut rushers coming off the edge and keep his quarterback clean. He possesses good length in his arms to ensure that he can get distance between him and the edge rusher and knows how to maximize his length to make it hard for edge rushers to establish moves effectively. He explodes off the line pass protection getting to his feet quickly and doesn't allow his opposing edge rusher to attack his inside gap by kick sliding too far from the line. He's very good with his hand placement when engaging with edge rushers and rarely finds his punches getting clubbed or swiped away. He has a very potent and powerful punch that can upend and stun edge rushers when timed up correctly and knows how to finish blocks when he knocks them off balance. He's proven to be a good hand fighter on the outside and rarely finds edge rushers getting into his chest off the snap. He's exceptional at mirroring edge rushers trying to bend the edge on him and consistently rides his man out of the pocket due to his top tier athleticism for the position. He has a very strong grip when he latches onto his edge rusher and does a nice job of lifting them a bit to mitigate their ability to shed and rush the quarterback. He's very good about keeping his inside gap clean from blitzers by both recognizing them at the snap as well as doubling back to attack any stunts and twists. He's good at reading his keys pre-snap and rarely makes the wrong decision in his reads. As a run blocker, he displays good athleticism to be a reliable puller on outside runs and can get to the second level with relative ease. He possesses a high football IQ at the tackle position and can be relied upon to grasp the mental aspects of the position quickly in the NFL. He played with a very bad quarterback in 2021 that often forced his team to stay on the field for  long stretches and in his air raid offense he had to often battle a great deal of time.

His run blocking needs tremendous work in almost all phases of his technique. His tall frame doesn't help him get his pads low when driving defensive lineman off the line and often is forced to turn them out of the hole. He possesses a relatively thin lower half for an offensive lineman and getting the leg drive to move defensive lineman has been a struggle for him in the run game. His timing of his punches can be off the mark at times and his ability to upend and give him some leverage to drive linemen off the ball and create holes in his gap. He doesn't possess that nasty demeanor teams covet in offensive lineman and could cost him some fans in NFL coaching rooms. While he's certainly athletic enough to reach and make blocks in the second level, he can take poor angles when making blocks on second level players which often gives them room to run around and make plays behind him. The offense noticeably didn't run plays much off the right side of the offensive line which doesn't tell me that he was trusted very much to open rush lanes on a consistent basis for his offense. His anchor is suspect when slowing down bulrushes and other power moves and hitting the weight room to strengthen his base is a must for his career. His height in pass protection doesn't help when dealing with bull rushes as he too often gets upended by edge rushers and driven into the pocket and developing better pad level off the line will be crucial to his development. He's not a versatile prospect with no snaps at guard and little experience at left tackle although I do believe he can slide over to the blind side eventually when a team gets comfortable with him. He was very jumpy off the line in 2021 which caused him to be the recipient of many false start penalties in his college career and hurt his team on many occasions. Part of the reason for his exceptional pass protection and lacking run blocking skills was his offense being a pass heavy air raid system and I have reservations about drafting him to a scheme that is a run based offense.

I think if a team is looking for a tackle prospect that can be a plug-n-play pass protector when somebody goes down, I think Abraham Lucas can be that guy. He has all the physical traits to start on the outside but his scheme in college may have severely hurt his development in the run game. If he can grind in practice as a run blocker and for a pass heavy offense, a team could have potential starting caliber offensive tackle at a discount pick.