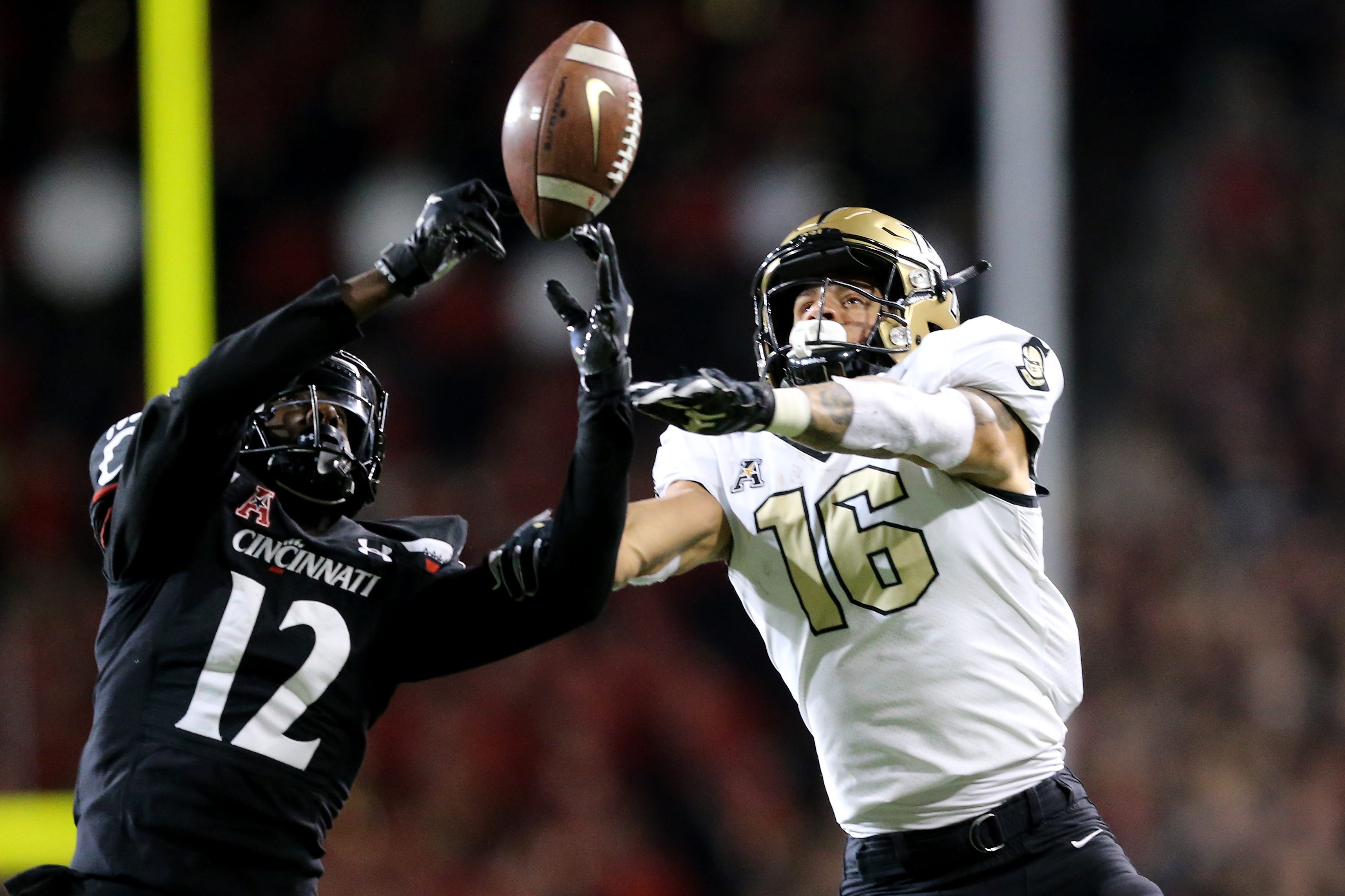 Photo by Kareem Elgazzar-The Enquirer
No defensive back played at a higher level currently than Cincinnati Bearcats Ahmad Gardner in the 2021 college football season and it is hard not to be excited about his intangibles and play over his last three seasons. At 6'3" and 205 lbs., Ahmad "Sauce '' Gardner brings rare length to the cornerback position and the ball skills to make him a dangerous cornerback to test on the field. He’s a great athlete with good agility and speed and can match up receivers big and small in college football. In man coverage, he plays with good patience at the line, not biting on any double moves or sluggo routes. He has a smooth backpedal and good hip flexibility to turn up field and cover deep balls. His huge wingspan immensely shrinks throwing windows , forcing quarterbacks to either throw very accurately or avoid him entirely; the latter was employed in the 2021 NFL season. He possesses phenomenal explosiveness in his lower half and it shows up for jump balls and when he jumps routes. He's very good at getting his hands on the ball on contested catches and often forces incomplete passes. He can change direction and reach top speed quickly to make a play and did a phenomenal job of not getting burned deep on routes. He has tremendous make-up speed if he gets beat and does a nice job of getting back into position. In press coverage, he does a great job of attacking early at the line of scrimmage to disrupt routes and making their initial get off in their routes difficult to start. His jam at the line often forces receivers to fight through him to get on their routes and it often forces quarterbacks to go there second reads early. He’s at home in zone coverage when he’s allowed to pick his spot when covering guys and allows his natural length, explosiveness, and agility to make throws in his area contested and dangerous. His elite length and size for the cornerback position makes him a huge problem for quarterbacks in zone coverage where his size and wingspan help shrink throwing windows and force quarterbacks to arch throws over him which gives him more chances to pick off passes. He's extremely technically sound in zone coverage when it comes to footwork and range as he does a great job of limiting his false steps in coverage. He's twitchier than you would expect a corner of his size to be and proved himself to be a true shutdown zone coverage corner in 2021. Gardner possesses some of the best hands in the draft among cornerbacks and offenses in 2021 seemed scared at times to throw the ball in his general vicinity because the margin of error for quarterbacks testing him is very small. He still managed to repeat his production the previous two years despite being given fewer targets in his direction and fewer opportunities to make plays, showing his ball hawking mentality all while not giving huge plays. He times his jumps on routes very well and he is always a threat to highpoint the football with his physical traits. He hasn't allowed a touchdown in over 1000 snaps which shows just how elite he is in the red zone. His prowess in coverage shows a player that grinds in the film and is a hard worker in practice and by all accounts, that's what he does and who he his. He's a tough tackler who is very willing to hit ball carriers head on. He's proven himself as a blitzer in college football which is surprising given that he's an outside cornerback. He’s a tremendous competitor and can be quite the trash talker against his man and does a nice job of getting into his opponents head. He rises up to the competition and isn’t afraid to travel with an opponent's best receiver, showing the competitive spirit needed to survive and potentially thrive in the NFL.

He plays a little higher in his back pedal than he should be and against shifty route-runners, it shows how he can struggle to change direction and stay on them. While he’s a very willing tackler, his lack of bulk in his frame makes it a tough task for him to bring down ball carriers and he takes bad angles when making tackles as well, often missing his mark and losing his grip on the ball carrier. He doesn't attack the football enough when making tackles in an attempt to try and force fumbles and create more turnovers for his defense. He gives too much cushion at times in man coverage as he tries to bait quarterbacks to throw at him and while that worked in college, veteran NFL quarterbacks could potentially eat him alive if he tries the same tactic. He can be a little grabby downfield and may have early struggles in the NFL at keeping his hands to himself downfield. Strictly an outside cornerback in the NFL with his limited snaps anywhere else in the secondary as well as his size not being suited for a position outside the role which limits his versatility. The AAC conference doesn't have the top level competition that the Power 5 schools do and while he's played well against top competition, his lack of experience against it hurts him a bit.

Ahmad Gardner is on the cusp of being the first Cincinnati player to be selected in the first round since 1971 and that in itself would be a hell of an accomplishment for him. He possesses the size, athleticism, coverage skills, and mentality to be a phenomenal NFL cornerback. He'll need to prove himself at the combine and in workouts to subside some of the worries teams will have about his level of competition but I have no doubts about his ability. He's a starting NFL cornerback on Day 1 and if he gets put on the right defense opposite a decent cornerback, he could be a special player early and potential pro bowl player in his career.