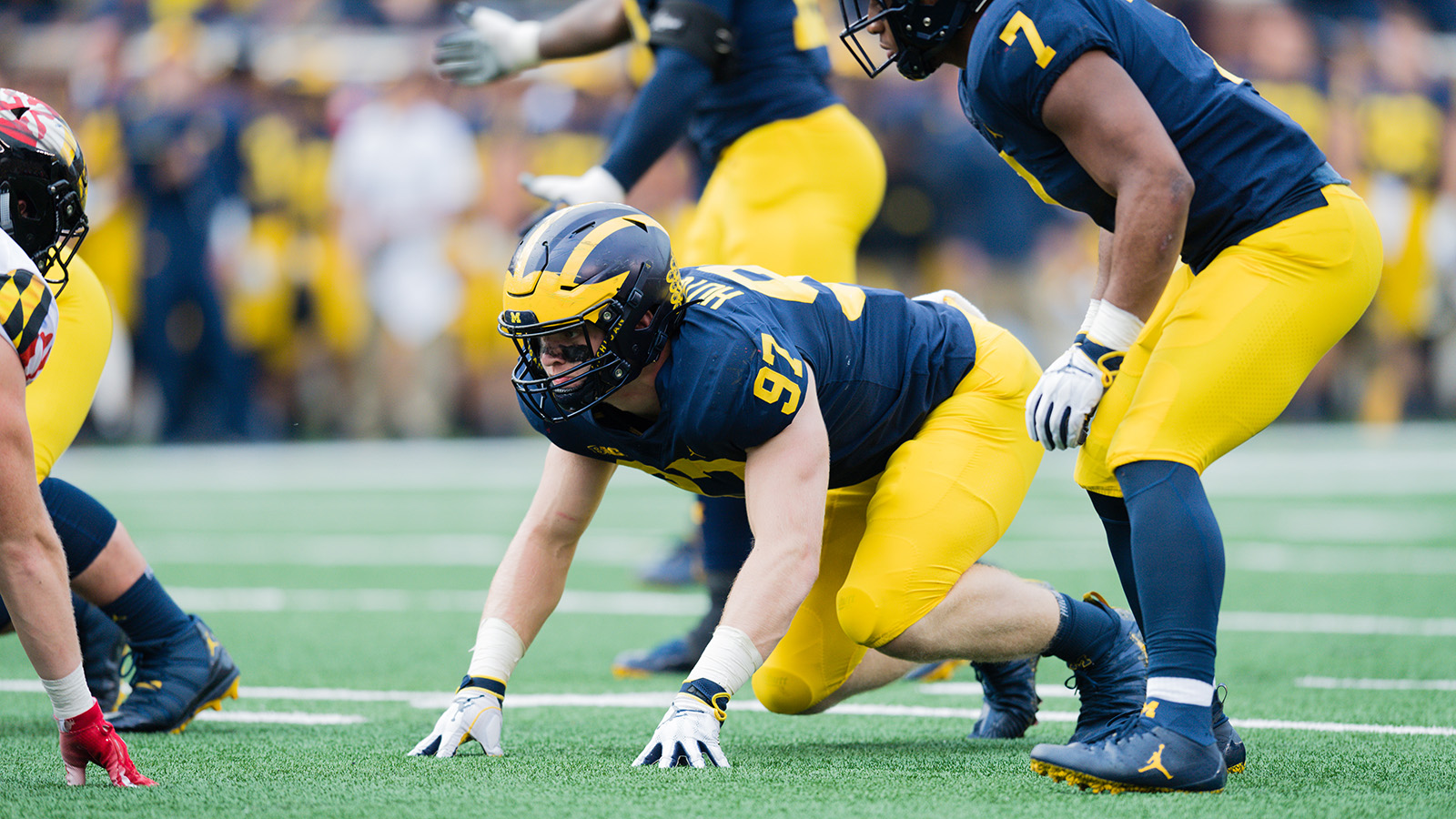 Photo by Daryl Marshke-Michigan Photography
No player in college football so far has done a better job of coming back from injury than Michigan's Aidan Hutchinson and he even has scouts touting him as a potentially a #1 pick because of his stellar play in 2021 that not only vaulted the Michigan Wolverines into the college football playoffs but got 2nd place in the Heisman voting as well. At 6'6" and 278 lbs., he, like all Michigan defensive lineman, can play from almost any position along the line of scrimmage which he has done plenty in his last two seasons, showing rare versatility for a defensive end. As a pass rusher, he has a phenomenal burst off the line and rare twitchiness in his lower half to make him a difficult edge rusher for offensive tackles to square up on. He has very good flexibility and a great athletic build which gives him tremendous position flexibility in the front seven. He can line up on the edge as a stand pass rusher, have his hand in the dirt as an end, playing the 3-tech position on pass rushing downs, and even has experience lining up over the center to create havoc from the interior. He's a menacing bull rusher with great use of his length and immense power in his chest. He has an excellent rip move off the edge and exceptional hand fighting skills to quickly shed blocks and get into the backfield. He has a very effective swipe and slip inside move that, combined with his rare athleticism, consistently creates pressure up the middle and wrecks plays. Although it rarely is in use, Hutchinson has a tremendous counter rush game with an excellent spin move, scissor counter, and an inside dip and rip move. He has exceptionally active hands that can swipe punches with ease. Part of the reason he’s such a difficult man for lineman to block is his elite level agility and change of direction for his size which allows him to turn on dime and make acrobatic tackles in the trenches. He plays with phenomenal pad level and leverage at the snap that he often is forcing the quarterback to scramble early, allowing his teammates to take advantage. On the rare occasion that he doesn't get free on his pass rush, he's been exceptional in college at swatting the football at the line of scrimmage and making plays like that is what has made him so good for Michigan. In run defense, his elite strength, pad level, and incredible football IQ make him the most complete edge rusher prospect in this draft. He holds his edge very well and often forces runs to bounce outside with his ability to bull rush offensive tackles into the running lane. If backs do bounce outside, he has more than enough agility to make open field tackles if he beats to the corner and if he's giving chase, he takes phenomenal tackling angles and is quick to bring them down. He's very good about attacking the football, both going for a strip sack or punching the ball out in the open field, and has changed the momentum of many games with consistency and overall skill at doing so. He lines on the edge most of the time in run defense but he's more than capable of handling his in the trenches if the defense is caught off guard by a run on a passing down. He's a malicious hitter when he makes contact with ball carriers and often does it in short spaces. He goes after the football on every tackle which speaks to his excellent football IQ.  He plays with excellent pad level and uses his extraordinary quickness to make him a difficult defender to get hands on. He plays with a white-hot motor and a fiery competitive nature that energizes the defense around him. He has shown remarkable toughness and determination in his recovery from his season ending leg injury and has been an unstoppable force in the BIG-10 in 2021. He's the unquestioned leader of the Michigan Wolverines and when he gets to the NFL, I can almost guarantee he'll change the culture into a winning one.

I'm basically nit picking a Lamborghini when I try to find negative aspects of Hutchinson's game but one thing that teams need to look at is his jump in production in 2021 as opposed to his first three years in college football with the arrival of fellow edge rusher in David Ojabo because you can't tell me his Hutchinson's productive senior season wasn't helped out a little but by Ojabo pressuring quarterbacks off the opposite end of the field. Michigan also boasts one of the better secondary's in college football lead by defensive Daxton Hill and they did give Hutchinson a little more time to generate sacks for his team.

If Aidan Hutchinson hadn’t broken his leg in 2020, he likely would have been a Day 1 with his potential that year but after his spectacular Heisman worthy season for Michigan, he has a real shot at being the 1st overall pick in the draft. He brings rare size and athleticism to the edge rusher position and when you add the versatility, high football IQ, and outstanding leadership skills he possesses, it’s hard to imagine that he doesn't hear his name called first. If I had to compare him to an NFL player I would say that he's eerily similar to either Bosa brother, probably Joey more so than Nick, and I would be shocked if he doesn;t take the league by storm like Joey did. He's a guaranteed perennial pro bowl edge rusher and has Canton written all over him if he meets expectations.