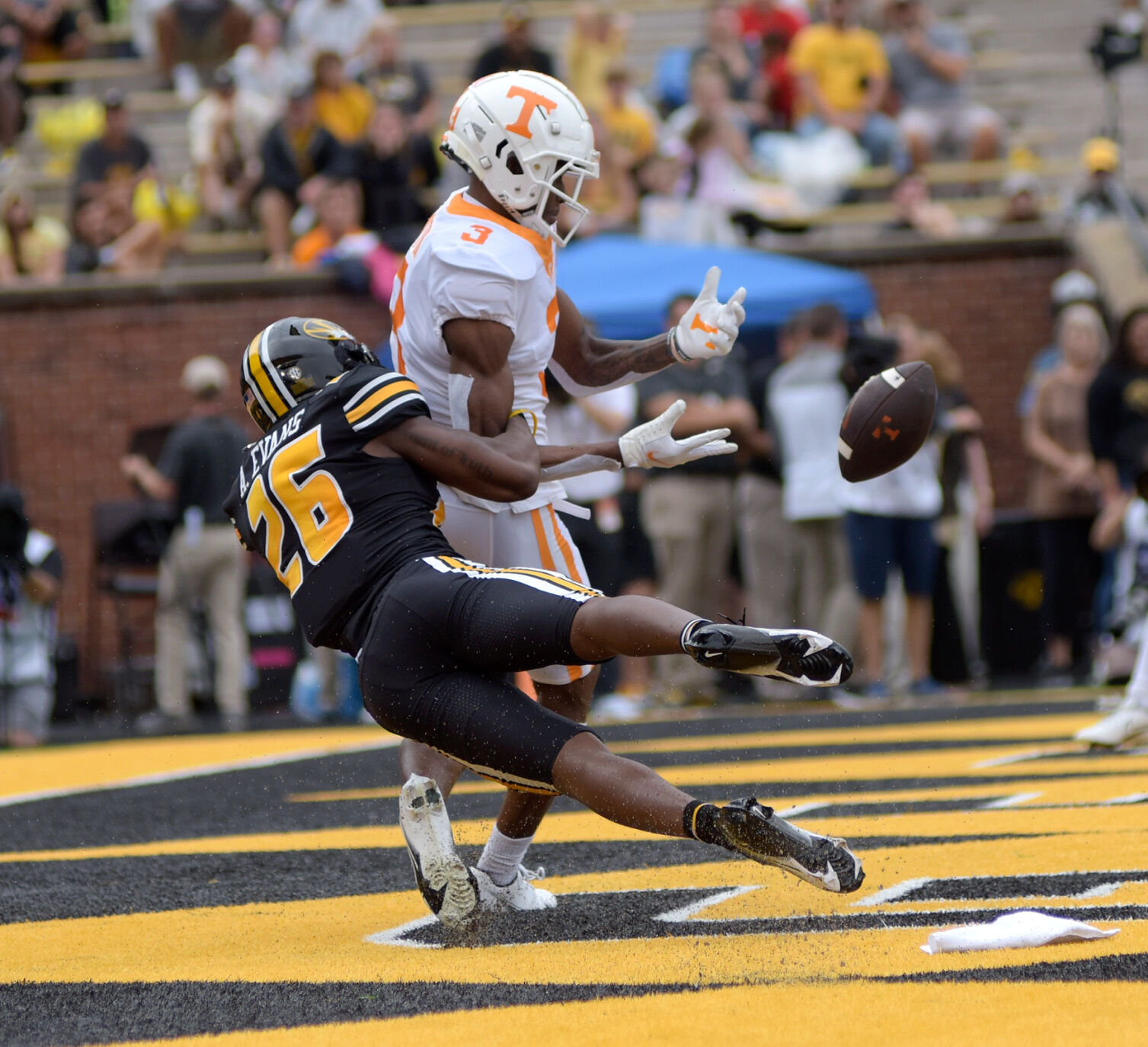 Photo by Alessia Tagliabue-Columbia Missourian
Mizzou defense was a disaster in 2021 but one of the lone bright spots was Akayleb Evans on the outside. At 6'2'' and 200 lbs., Evans brings phenomenal length and size as well as good athleticism. Evans made a name for himself at Tulsa for his ability to shutdown receivers on his side of the field and force offensive coordinators to be wary of him. In man coverage, Evans displays good technique in his back pedal and fluid footwork and it allows him to burst on the ball better. He has decent agility for corners his size and has shown the ability to change direction on the fly. He has good straight line speed and will keep up with most receivers in college football on deep throws. His phenomenal length in arms and size help him most when it comes to quarterbacks throwing accurate passes in his direction because he shrinks throwing windows. He can blanket receivers that can match his size in man coverage and has taken receivers out of games if they can't separate from him. He has great route recognition early in a plays development and patiently waits for his moment to strike when the receiver breaks on his route. He doesn't bite on pump fakes or look offs which makes him a difficult corner to take advantage of on the field. Press coverage is where he thrives and it's easy to see why. He does a great job of aggressively jamming his receiver at the line and forces them to work through him to get on their routes. He's very good at forcing his receiver towards the boundary line and can force them outside, often causing incomplete passes. He doesn't get pushed off of easily due to his size and can wear down receivers as games go on with his physicality down field. He has more than enough size and muscle in his frame to take on bigger and stronger receivers and hold his own and has proven to be effective at matching size. He's a nightmare matchup for contested catches with his size and length and often knocks away passes or forces the football out of the receivers hands. He does a great job of attacking the ball at the receiver's catch point. He possesses more than enough size and strength as well to cover tight ends effectively, an increasingly used weapon on offenses. In zone coverage, he can be difficult to throw passes around due to his size and length and he can create mismatches because of it. He does a nice job of route recognition in zone and isn't far from the intended target when the ball is thrown. He's a monster in run defense with his physical tackling technique and when he gets his hands on a ball carrier, they go down. He will attack ball carriers head on to ensure he limits yards after contact and he has shown the ability to lay the wood on players when he gets a shot. He does go after the football when tackling and can cause turnovers by stripping the football or knocking it out. He has a great deal of snaps under his belt and his transfer to Mizzou from Tulsa showed that he can play with tougher competition as well as showing that he's not afraid of a challenge. His high snap count also shows that he's a seasoned prospect heading into the draft and learning NFL techniques and defenses shouldn't be too tall of a task. He's a tough and high effort player and should win over coaches early in his career with his tenacity and high football IQ.

He doesn't possess great top end speed and will struggle to cover deep threats in the NFL. While he doesn't bite on passes often when he does and misses he doesn't have the explosiveness and makeup speed to get into plays quickly. He doesn't have great range in zone coverage to make plays and while he does know zone coverage, he will likely need to play in press-man schemes to find success in the NFL. He didn't move positions very much in college, mainly played outside cornerback, and doesn't have the versatility that  teams covet in cornerbacks in today's NFL. One of his worst attributes by far is his ball skills, or lack thereof, as he only had one interception in his five seasons of college football. He has bad hands, even for a cornerback, and expects him to jump routes and snag interceptions. He doesn't attack passes in the air but rather at the catch point which is odd considering his length and size. He can get very aggressive down the field in press-man coverage by grabbing and tugging receivers at times and will need to tone it down in the NFL or risk pass interference calls.

Akayleb Evans has great traits and intangibles combined with his good technique and high football IQ make him an enticing commodity come draft day and if he shows out in works with his athleticism and show that he can catch passes, he will bump up his stock tremendously. His ball skills are what's going to drop his stock because NFL defenses love players that can change games in an instant which is something he has proven to struggle with. What he can do, is give a defensive coordinator consistency on one side of the field which helps strengthen the foundation of a defense. If he can find his footing in a press-man defense and be given time to develop, he could be a quality outside corner in the NFL.