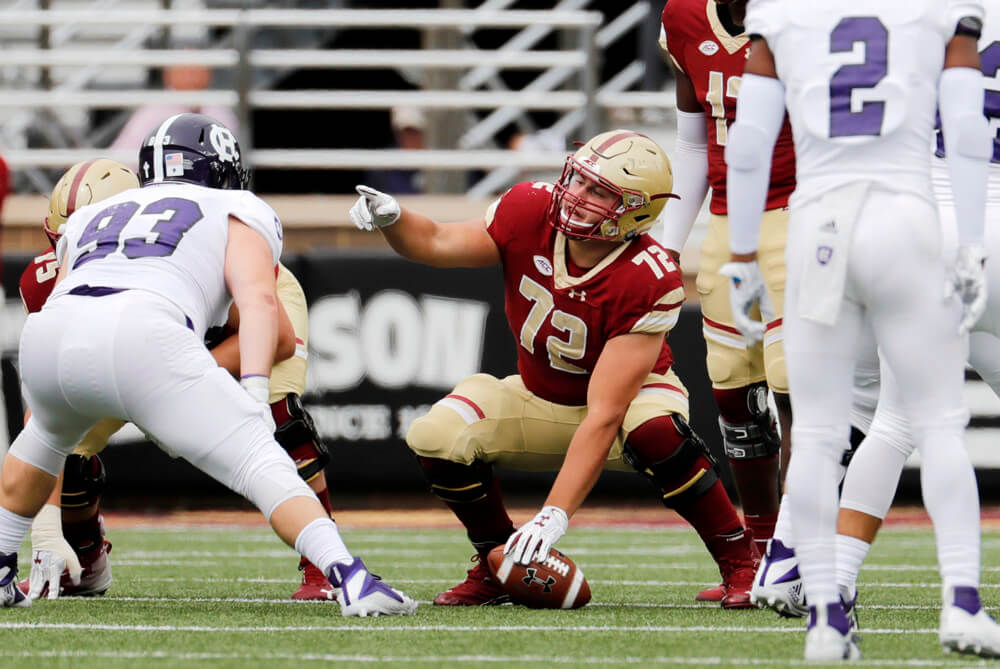 Photo by Fred Kfoury III-Icon Sportswire
The Boston College Eagles feature one of the best offensive lines in the country and at least two of them will hear their name called in April of 2021 and one of them could be Alec Lindstrom. He possesses a unique build for the position at 6'3" and 298 lbs. with excellent technique and great bloodlines for the position. In pass protection, he does a great job of reading the defense and talking with the quarterback in case of an audible on offense. He's quick to recognize blitzers and does a nice job ensuring his quarterback picks them up, showing his high football IQ and advanced knowledge of the game. He does a good job keeping his chest clean from defensive lineman and is very violent with his hands when they latch on. He has good power in his punch and is very accurate when initiating it. He has good hand strength to grab and maneuver defensive lineman away from the quarterback and has shown himself to be a difficult lineman to break away from. He has great lateral agility in the interior and does a great job of mirroring defensive lineman trying to get up field and has enough quickness in his feet to catch blitzers attacking his gap. He has good reaction time to stunts and twists in his gap and does a good job of stalling them before they can get up field. In the run game, he plays with decent leverage when driving his man and does a great job of keeping opponents in front of him. He has good power in his frame and hands and can be a pain for defensive lineman to break away from when he's running blocking. He has a nasty demeanor in the run game and will maul and finish opponents whenever he can. He's a very good combo blocker who times his disengagements well and takes good angles on defenders in the second level. He has excellent balance in his feet that helps him readjust his base if he gets caught by a bull rush. He's a good puller on outside runs and does a nice job of picking the defender with the best chance to make a play on the run. He's a huge asset in screen protection with his ability to get to his spot quickly and his raging bull demeanor when clearing a path for his running back or receiver on the play. His brother, Chris Lindstrom, was a 1st round pick by the Falcons and has proven to be a quality play so far in his career which bodes well for Alec Lindstrom and his draft stock heading into April..

His unique size and weight has presented issues for him in his college career and he will need to make significant changes if wants to succeed in the pros. Because of his light weight for an interior lineman and too high of pad level, he far too often can get walked back into the pocket forcing the quarterback to scramble quite often and adding much more weight, especially to his lower half, and keeping his pads down on a much more consistent basis is a must for him to succeed in the NFL. He can sometimes get complacent and duck his head when engaging defenders which can lead to blitzers catching him off guard. Quicker pass rushing tackles can also get the best of him as well with rip moves or swim moves. On pull blocks, while he certainly has the speed and agility to hit his man on time, he's often late to the party and can find his rushing lane collapsing  him. He lacks sufficient arm length for an offensive lineman and has noticeably struggled against longer armed defensive lineman that can get underneath his pads. He plays with two other NFL draft prospects in Zion Johnson, a potential top 50 pick, and Tyler Vrabel, one of the better offensive tackle prospects in the draft and it would be fair to say that Lindstrom has benefited from playing alongside both players in his career.

His NFL bloodlines with both his father and his brother having spent time in the NFL should do him a solid with NFL teams as coaches love players who have a pro sports lineage. His knowledge of the game and nasty demeanor as a blocker is going to impress at least one NFL team come draft day which gives him one of the higher floors among offensive lineman in the draft. If he can gain some weight and develop more consistency with his fundamentals he should find himself having a good career in the NFL.