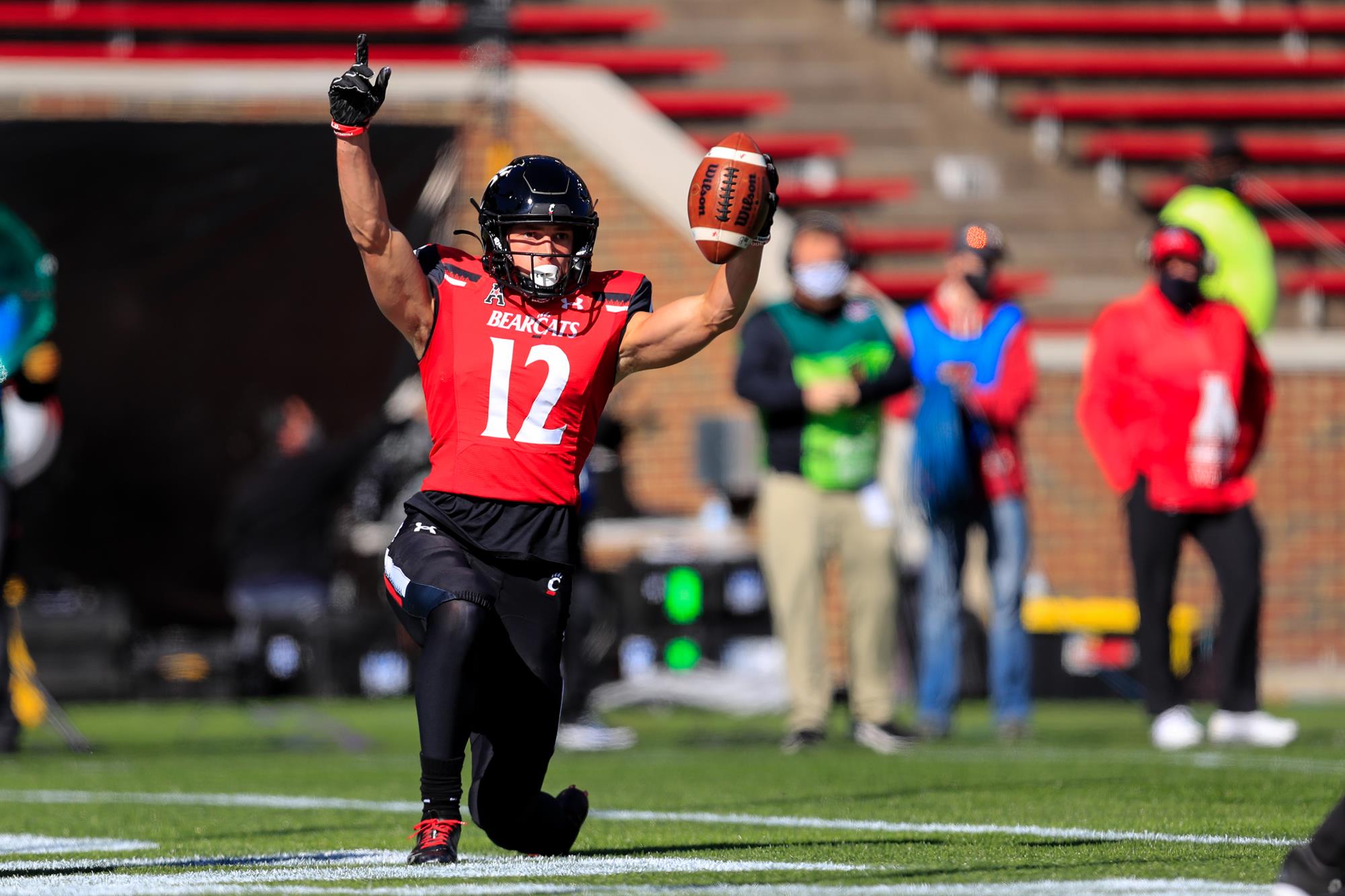 Photo by Aaron Doster-USA Today Sports
While the Cincinnati Bearcats defense was highly regarded in college football there was highly underrated going into games which was often why they surprised college football teams  and made the playoffs and by far their most underrated player was wide receiver Alec Pierce who quietly put together an excellent season. At 6'3'' and 215 lbs., Pierce brings a tremendous blend of size, athleticism, and toughness to the receiver position. He was the Cincinnati BearCats best offensive weapon and when quarterback Desmond Ridder needed a play to be made he simply just threw it up to Pierce and hoped for the best and the best outcome usually came because Pierce was a nightmare to deal with for cornerbacks. He possesses a very muscular frame to fight for the ball on contested catches and 50/50 balls and his body control in the air to position himself to make the catch is elite which creates one of the best jump ball receivers in the draft. He has a very large catch radius to bring in catches from outside his frame which is made easier by his body control. He was a highly effective redzone receiver for the Bear Cats with 8 touchdowns in 2021 with many of them being caught in the endzone rather than him finding his way in. He rarely has dropped passes and he does a phenomenal job of plucking the football out of the air and his bigger frame certainly helps him secure catches through contact and traffic. He has impressive boundary awareness with a good sense to put his feet behind the white sidelines and does a great job of finding the line to gain and keeping drives alive. He has excellent speed, agility, and explosiveness and if defensive backs don't stay on their toes against him, he can burn them deep. He displays good route-running especially for a man his size and can create passing windows easily and make nice cuts at the top of his routes. He's played both outside and in the slot which gives him good versatility heading into the NFL. He's played his best against tough competition like Notre Dame and Pierce's play in that game was the biggest reason for the Fighting Irish's upset to the Bear Cats. He's a highly competitive receiver given his success rate on jump balls and he plays with excellent toughness to take hits over the middle and still secure catches.

His game at Alabama versus SEC corners in the college football playoffs left a lot to be desired and while Alabama's defensive line made life hell for his quarterback and Alabama ran the ball so well that the time of possession for the Crimson Tide was nearly doubled, Desmond Ridder didn't target him because he struggled to get open. Pierce, while he's a crafty route-runner, does have trouble getting separation at the top of his routes and against Alabama's tall corners he showed that he has considerable growth in this area of his game. Too many of his catches are contested catches for comfort and while he certainly made Tulsa's and East Carolina's defensive backs look foolish by simply going full alfa on them in the air, NFL corners aren't going to be as easily outmatched. He could do a better job of fighting through press coverage which he showed struggles doing against Alabama and is another reason for why he has made contested catches often and he'll need NFL coaching to fix this issue. His production isn't very consistent which isn't entirely his fault considering that the Bearcats are a run based system but he has had minimal impact on some games and then he'll have games where he can't be stopped. He plays in the AAC against fairly poor competition at cornerback and while I won't say his stats are inflated, some of them I would say came easier than most receivers in this draft. Not many yards after the catch for him and while he has occasionally put the moves on defenders out of position.

Alec Pierce's inexperience against top competition is going to hurt him in the draft process but the tape doesn't when you see him come down with contested catches and make plays that need to be made. With a little experience against NFL corners, Alec Pierce can work his game up to an NFL level and be a reliable outside receiver for an organization. I think he can be a #1 receiver in the NFL down the line but if he were a quality #2 receiver in his first few years in the league, that would be a quality draft pick. He needs work and time to get him to reach his ceiling but he has great potential in the NFL.