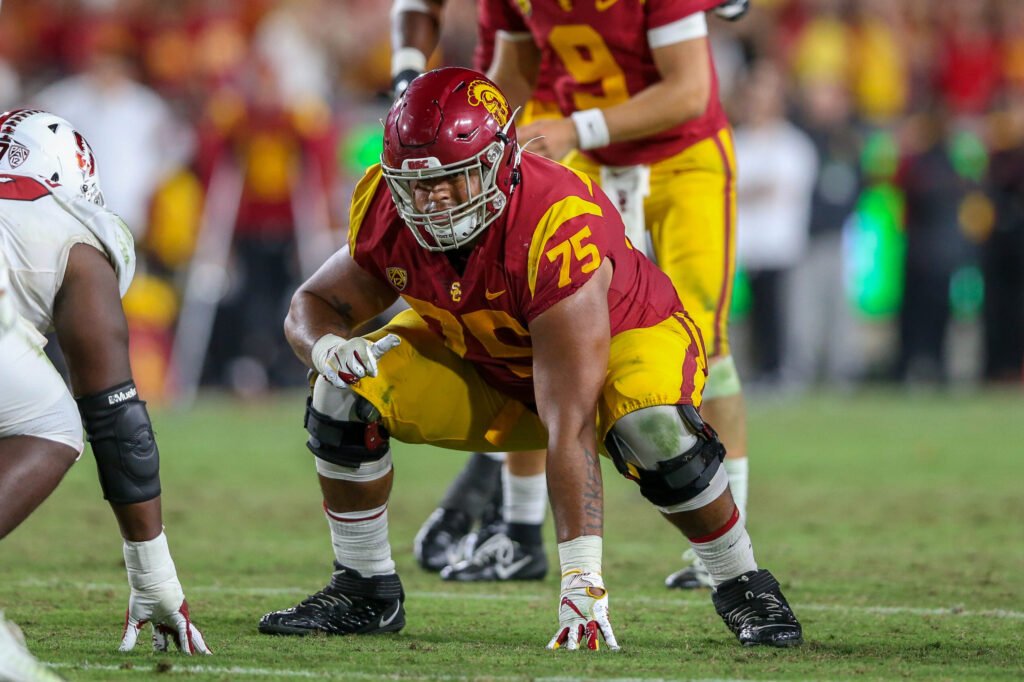 Alijah Vera-Tucker was one of the best interior offensive lineman in the PAC-12 and he showed in 2020 that he's easily one of the most versatile lineman in the draft after lining up at offensive tackle and absolutely dominated. He brings good size to the position at 6'4" and 315 lbs. with and highly impressive athleticism. In the interior he plays with malice and aggression in the run game, looking to run through lineman and over linebackers. He's extremely explosive off the line and has some of the most fluid movement skills you will find from an interior lineman. He has shown little issues reaching the 2nd level of a defense and mauling linebackers and safeties alike. In pass protection in the interior, he's very patient out of his stance and does a great job of keeping his pad level low. He has strong hands that can be difficult for lineman to break away from. He has a very powerful upper body that's noticeable when punching defensive lineman. He possess very active hands and does a great job of keeping hands out of his chest. He does a great job picking up blitzes and quickly covers ground when they come at him. He handles counter moves very well, often throwing his opponent to the ground. As an offensive tackle, he clearly displays the athleticism and technical prowess to thrive at the position and in 2020 he had his shot. He has an explosive kick slide out of his stance that keeps edge rushers from getting the jump on him. He's very balanced in his stance and his quick feet and allow him to mirror defenders very well. His mobility allows him ride defenders out of the pocket and he's does a great job countering spins on the inside. His time at guard makes him a great run blocker on the outside as he can absolutely maul edge defenders off the snap.

His short arms are going to cost him an opportunity at getting drafted as a tackle and he has struggled to counter against defenders that can out reach him. If he gives up his chest to a defender he has shown to have trouble getting them to disengage and reestablishing leverage. He can struggled against powerful interior lineman when run blocking and can be hit or miss when opening up holes in the defense.

Alijah Vera-Tucker has seen his draft stock skyrocket after his 2020 season as he clearly displayed a level of versatility rarely seen from an offensive lineman. He was not only dominant as an interior lineman but his play at offensive tackle likely earned him a Day 1 selection and any team in need of a multi-positional offensive lineman should have Vera-Tucker at the top of their list.