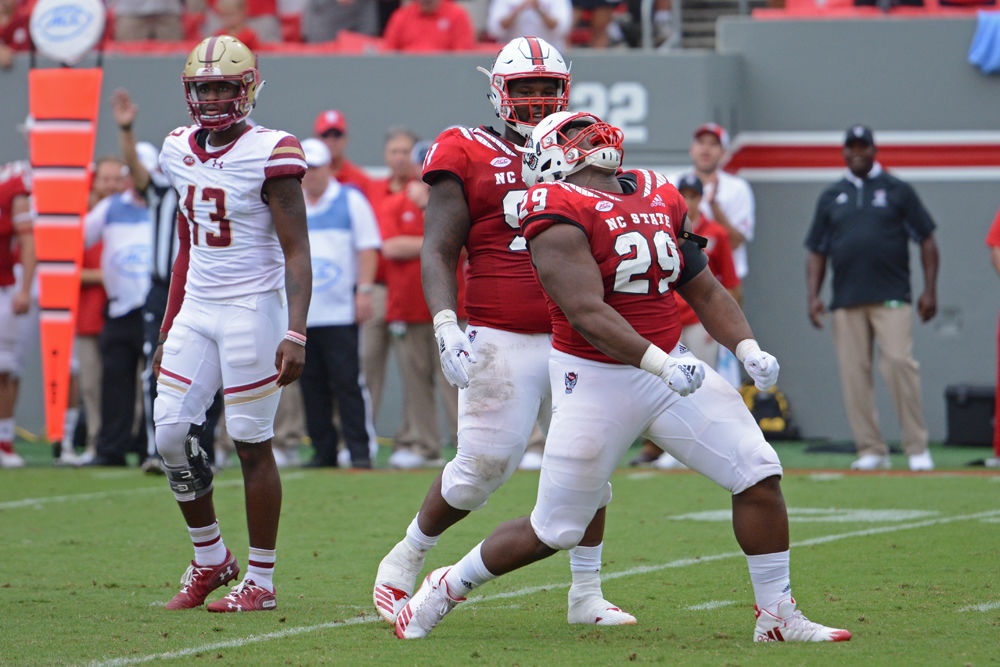 Alim Mcneill is a big ball of muscle power that was a rock for Wolf Pack in 2020 and should find himself in a similar situation in the NFL. He's built like a prototypical 1-tech or nose guard at 6'2" and 320 lbs. with tremendous upper and lower body strength and surprising pass rush ability. He plays with excellent pad level and he has more than enough power in his body to drive great guards off the ball. He's at his best when tasked with defending the run which is something he does very well. He's dam in the middle of a line on goal line plays and rarely finds himself losing ground. He loves to eat up blocks in the middle of a line allowing his teammates to make plays around him, an admirable trait for a defensive lineman. He has very powerful hands that are very effective at shedding blocks and arm tackling ball carriers when he gets a hand on them. He does a great job of flowing with the run play and fighting his way through blocks to collapse running lanes and rarely finds himself getting caught in the wash. He's good at keeping opponents out of his chest and has good enough length to keep guards from getting his pads. He has surprising ability as a pass rusher and was very productive in his second efforts at getting sacks. He has a great bull rush that can absolutely give offensive lineman a lesson in back pedaling and can collapse a pocket  with little resistance if everything in his technique goes right. He has a decent rip move and enough quickness to give slower guards problems if he can put a move on them. He has the size and athleticism to be a scheme versatile prospect.

He seems to strictly be a space-eater in the NFL either as a nose guard in a 3-4 or a 1-tech in a 4-3 and likely won't ever find himself outside of that role. He can tire out in games if it becomes a slug fest in the run game and will need to improve his conditioning to be a consistent player in the NFL. He saw his production drop in 2020 and not just because he played half the season. He could use some more tuning up in his pass rush technique by adding some more moves to his repertoire outside of his swim move. Flexibility can be an issue for him as he can't fit into gaps in a line easily, fully relying on his power to make plays. He can lose sight of the play at times and be late to collapse lanes.

Alim Mcneill has the potential to be a cornerstone piece of a defensive line. His ability to eat up blocks and create opportunities for his fellow teammates is remarkable and sure to earn him favor with at least one NFL coach. He's got some work to do with his ability to consistently be an effective pass rusher but he's likely to find success in the NFL as a run stuffer.