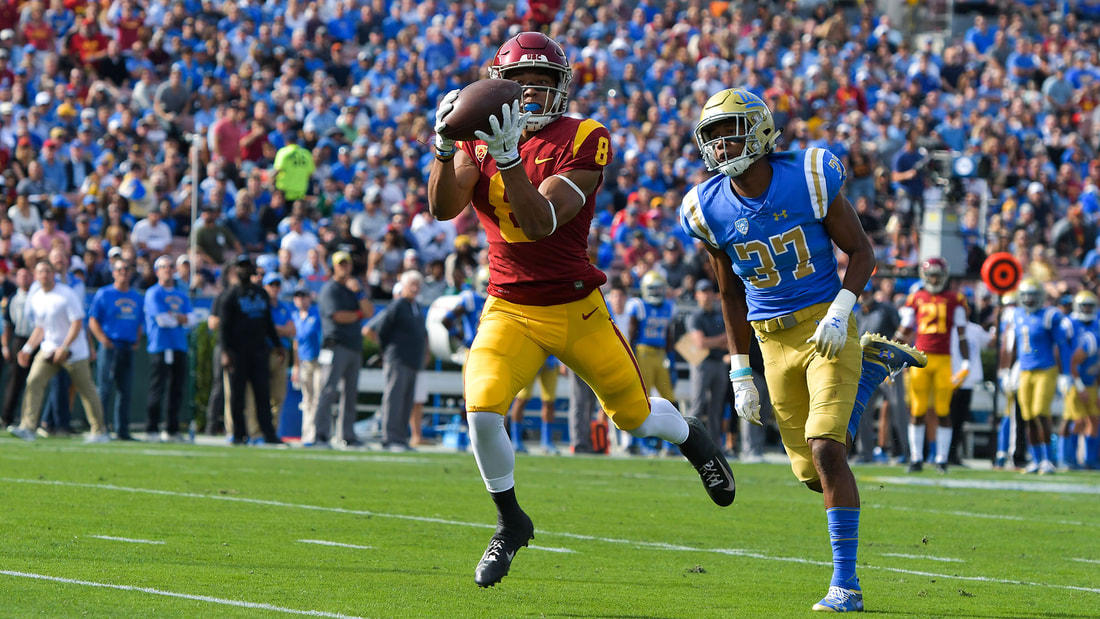 Amon-Ra St. Brown has, like most USC receivers, a fast moving hype train after having two very good seasons donning the Trojan Red and Gold. He's a very thick and muscular 6'1" and 195 lbs. with long arms and big hands. He's a tough run after the catch who is fearless when having to catch shallow passes and turn up field and take a hit. Not afraid to drop his pads and run over defenders even at his weight and has surprising power in legs to power through tackles. He's got excellent hands to real in difficult passes and isn't new to making one-handed passes. Very difficult to tackle in the open-field and does have excellent ball carrier vision after the catch. Very explosive and very athletic who can makes plays at all levels of the field. Fights through press coverage very well and clearly has a competitive gene in his body when fighting for separation at the top of the route. Tracks the football very well on deep routes and does an a great job of fighting for the football in the air. He plays big when the moments require it and isn't afraid of the spotlight. His brother, Equanimeous, plays for the packers which shows that he has the traits to succeed in the pros. Fast enough to get behind safeties and catch deep passes and has enough quickness and agility in his feet to make stop-and-go routes very effective. He does a great job of holding onto the football through contact and rarely lets passes get away from him. USC used reverses as well and was very productive on the opportunities he had. I would like to see him catch passes at their highest point more often because he has a tendency of letting the pass come to him rather than leaping up and bringing them in.

Not a lot of routes in his route tree outside of a crossing route, short slant, and a few deep routes and will need to learn more to find success. Although it's admirable to watch run-over and around defenders, I would like to see him avoid taking unnecessary contact after the catch and bolt outside more because his body is built well enough to take those hits on a regular basis. He didn't line-up on the outside as much as you'd like a receiver of his caliber to and mainly played against slot corners that can't handle his ability. He could improve his footwork a bit more when breaking on his routes because it's kind of sloppy.
He also played with Kedon Slovis at quarterback whose going to likely be a Top pick when he becomes draft eligible.

Amon-Ra St. Brown lit the PAC-12 on fire in 2019 and 2020 and will likely do it in the NFL if coached up more. His run after catch ability and his elite level hands make him a threat to come down with the ball on every pass and it's a key reason why he was so effective in college. I expect him to sneak into Day 1 of the draft if receivers start coming off the board early and Amon-Ra St. Brown could be a major weapon in the right offensive system.