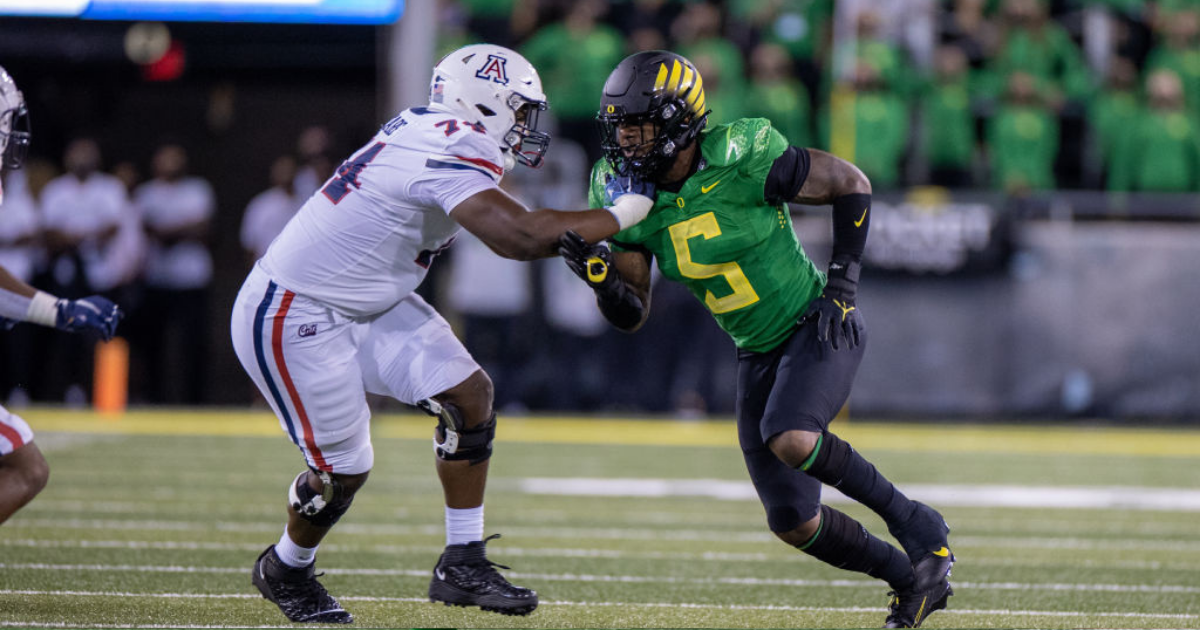 Photo by Tom Hauck/Getty Images
Every couple years, the NFL draft features an elite level edge rusher destined to wreak havoc in the NFL and Kayvon Thibodeaux is that guy in 2022. At 6'5" and 255 lbs. boasts elite level athleticism and length for the edge rusher position. He's as explosive off the snap of the ball as I've ever seen in college football and will give offensive lineman fits in the NFL early in his rookie year. He's a freak athlete off the edge with terrific speed and quickness to make short work of offensive lineman in the PAC-12. He goes from 0-60 in a blink of an eye and makes the margin of error for offensive tackles trying to block microscopic. His rip move can be unblockable for offensive lineman if he gets the edge quickly and makes quarterbacks think twice about holding onto the ball. He boasts ridiculous arm length, even for an edge rusher, and has shown little issue keeping his chest clean for offensive tackles. He has a very good swim move with his size and speed and his thin yet muscular frame allows him to squeeze through gaps on the inside when he applies it. He has a very quick stack-and-shed move when attacking the inside and has caused problems for offenses when he rushes inside. He's very active with his hands at the line and has found success batting down passes and shrinking throwing windows with his length. He has tremendous power in his torso despite his relatively thin frame and has shown the ability to bull rush offensive lineman when gets the leverage. He comes off the ball with excellent pad level and rarely finds himself losing a leverage battle at the point of contact. He's a terror when he shoots inside gaps and engages guards as they simply aren't able to handle his speed and length. He's always going after the football when making a sack and has found success doing so when rushing off the blindside. He's an extremely fluid and flexible pass rusher and has shown the ability to take punches from lineman and absorb without losing his balance. He has very active feet and excellent agility allowing him to change direction on a dime. He can line up with his hand in the dirt or as a standup pass rusher which gives him great scheme versatility. Added significant muscle mass after his electric freshman year and became much more of a force in the run game. He has tremendous pursuit speed in the backfield and can wreck plays quickly left unchecked. He's a high motor edge rusher that plays at 100 mph which wears out opposing offenses quickly.

Kayvon Thibodeaux is an elite level pass rusher and should find quick success in the pros chasing quarterbacks but his ability to stop the run has been his Achilles heel in his college football career. He struggles at times with shedding blocks when he engages offensive tackles once they have a grip on him. He can be overwhelmed by double teams at times and lose ground on his edge allowing rushing lanes to open up. He's too overzealous at times to rush the quarterback when he gets in the backfield and can bite hard on the read option plays. He needs to improve tackling technique as too many times he tackles high and ends up getting dragged for extra yardage.  He would be wise to add a spin move to his arsenal given his speed and agility which would make him a complete pass rusher off the edge.

Kayvon Thibodeaux is considered by many to be the #1 overall prospect in 2022 not only due to his supreme talent but also because pass rushers are the second most important position behind quarterback and any team not sold on this year's quarterbacks should have zero issues selecting Thibodeaux to kick off the draft. Kayvon Thibodeaux is easily the best pass rusher in the draft with his astronomical ceiling and with a little polishing to his game, a team could have themselves a perennial pro bowler on the edge.