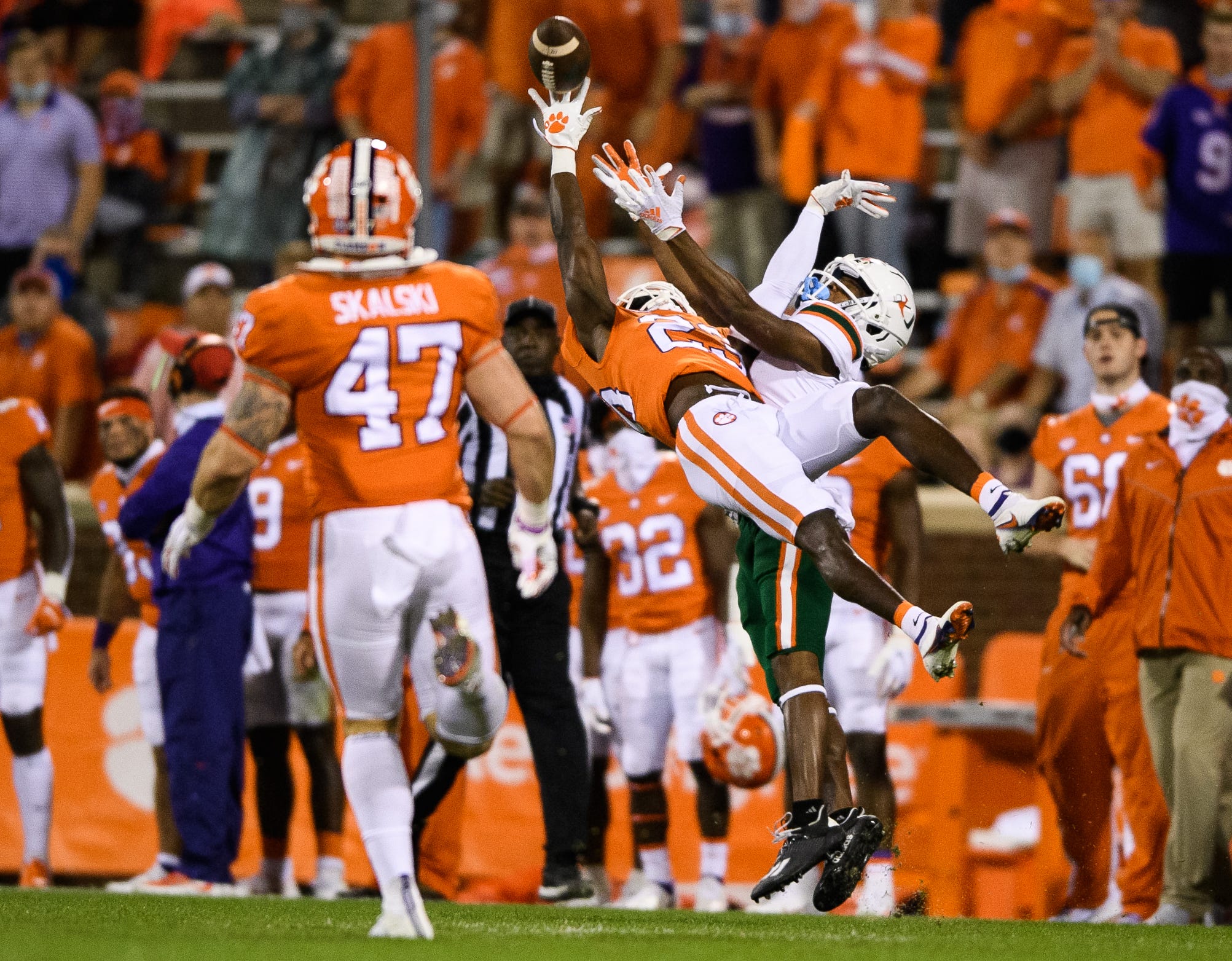 Photo by Ken Ruinard-USA TODAY Sports
Andre Booth Jr. out of Clemson has been one of the hottest cornerback prospects in college football in 2021 with some scouts even considering him a top 10 prospect in the 2022 draft. At 6' and 195 lbs., Booth Jr. brings prototypical size and superb athleticism as a defensive back. When you watch a tape of him, his athletic ability is the first thing you notice. Booth Jr. can run down the field with the fastest receivers in college football, he can turn on a dime, and he can jump out the gym and you tell that other offensive coordinators know and fear this about him. He's a very technically sound cornerback in his 3rd college football season you can tell that he has learned quickly with the more reps he's received. In man coverage, he plays low in his stance and his back pedal is fluid. He does a great job of keeping himself glued to receivers down the field and does a great job of keeping receivers from getting on top of him. He possesses phenomenal length in his arms for a corner his size and he knows how to use it. He's very good at shrinking passing lanes with length which results in missed throws and contested catches. He has great route anticipation, more than enough burst in his lower half to redirect and make-up ground. If he gets burned he has enough make-speed to regain ground quickly and stay in the play. He's twitchy . He's not fooled by sluggo routes as he's tamed his aggressiveness when jumping routes. In press coverage, he's extremely aggressive at the line of scrimmage and does a great job of using his length to quickly force receivers off their routes. He has very good strength in his upper body for a corner and has little issues with pressing bigger receivers. He's very active hands down field and does a great job of making receivers work downfield. He does a nice job of keeping his hands clean of the receiver down field and has the awareness to locate the ball in the air to avoid penalties. In zone coverage, he has the twitchiness and range to cover a large area and make plays. He has enough length to disrupt throwing lanes and force quarterbacks to hesitate throwing over him. His phenomenal hops and excellent length, combined with his tenacious competitive fire, make him a nightmare to deal with on contested catches. He has good ball skills and tremendous hands, he has two astonishing one-handed interceptions in his career, and offensive coordinators and quarterbacks have avoided throwing to his side of the field in 2021 because of that. He's an excellent run defender who can bring the thunder when making contact. He does a nice job of bringing down ball carriers and doesn't lose his grip once he latches on. He's a veracious competitor as well as a white hot motor and you can be sure as a coach that Andrew Booth Jr. is not only going to give 100% every play but he will leave it all on the field. He plays at Clemson which faces very stiff competition every year, as well as making championship appearances over the last three seasons, so playing against NFL ready offensive talent is not lost on him.

Andrew Booth Jr. still is developing his zone coverage skills as Clemson plays mostly man coverage. He has trouble at times with timing his jumps on routes. He can play too cautiously in zone and be late arriving to throw in the shallows of the defense. He's an emotional player on the field and has at times let his emotions get the best of him at times, was ejected his freshman year against Louisville for punching a player repeatedly on special teams, and will need to keep his emotions in check in the pros. Not a crazy amount of production but that is most likely due to his lack of targets in his direction. He doesn’t attack the football enough when he has a chance to and will need to work on coming down with the football rather than just defending it. He tackles ball carriers at the ankles far too often when defending the run and needs to tackle head up more often in the pros.

Andrew Booth Jr. has grown up a lot since his freshman year in college that saw him get humiliated on television for his Louisville incident and while the Clemson Tigers have declined overall in recent years, Booth Jr. has stepped up his play in a major way. Offensive coordinators and quarterbacks avoiding him on defense shows the respect they have for his game and he’s going to have coaches fawning over his potential throughout the draft process. If he plays in the right scheme in the NFL, he could be a pro bowl cornerback early in his career with his sky high ceiling.