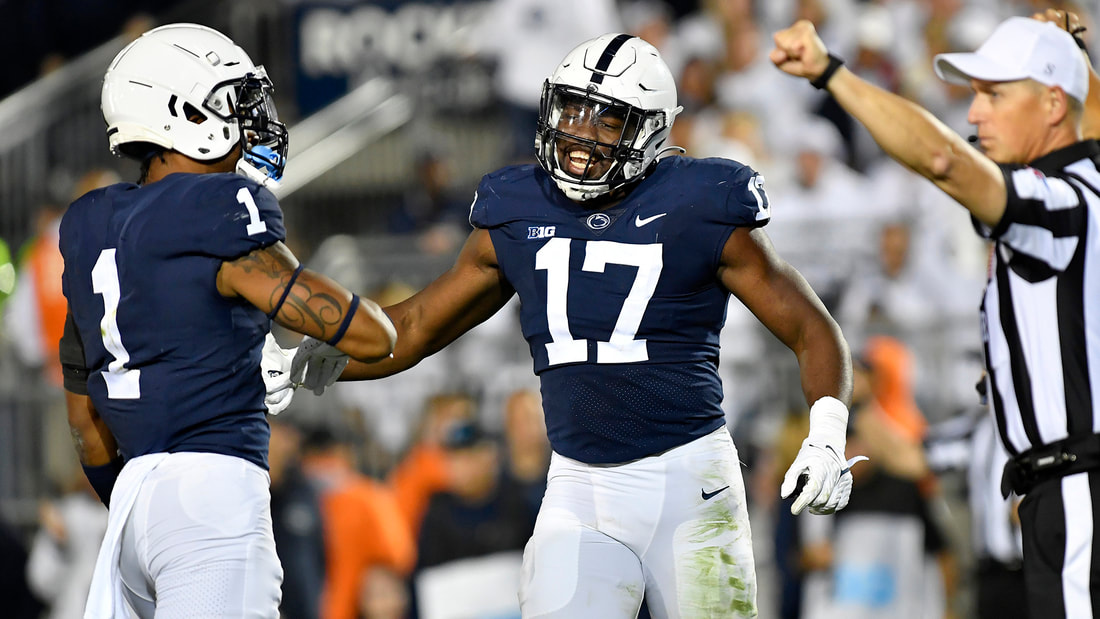 Photo by Randy Litzinger-Icon Sportswire
After transferring from Temple to Penn State before the 2021 season, Arnold Ebiketie's bold move to move up the college ranks and play for the Nittany Lions has paid huge dividends and has earned him plenty of NFL draft attention. At 6'3" and 256 lbs., Ebiketie brings excellent power and athleticism off the edge. He has a phenomenal first step off the line with low pad level and plenty of burst with him. He has good length in his arms for his size and knows how to use it to his advantage. He possesses great speed off the edge and as well as great conversion of speed to power. He's a very technically sound pass rusher off the edge which allowed him to apply consistent pressure off the edge. He has a very powerful punch off the line that allows him to create good separation from tackles and allows him to initiate moves with precision. He has an excellent swim move that's initiated quickly and has good power once he makes contact. He has a great stutter-swipe move as well as a club swipe move off the line when he's single-blocked and can wreak havoc quickly if he's not chipped quickly. He possesses phenomenal power in his lower half of his body and has shown the ability to bull rush offensive tackles back into the quarterback's lap if gets the leverage. He's a very good hand fighter at the line and does a great job of keeping his opponents hands out his chest, allowing him to stay in the play. You can see his ridiculous burst off the line when offenses leave him unguarded as he is a game wrecker when he's not touched. He has very good flexibility in his frame that allows him to bend the edge and shorten his path to the quarterback. His powerful frame, explosive get-off, good flexibility, and excellent pad level give him one of the better dip and rip moves in all of college football and that's a move of his that should translate into the NFL very well. He has a very good counter rush game with a nice spin move when his initial rush move fails and his relentless effort on the rush allows him to maintain pressure on the quarterback. He has excellent twitchiness in his lower half when having to chase quarterbacks that try to take his outside shoulder and he has on multiple occasions outrun the quarterback and brought him still behind the line. As a run defender, he has shown much improvement in his ability to hold his end at Penn State than he did at his Temple, likely due to the strength and conditioning coaches for the Nittany Lions doing what they do best by turning great athletes into monster athletes. He has done a great job of digging his heels in on run downs and keeping his inside gap from opening up. His ability to stack and shed blocks really improved in 2021 on the Penn State defense and it allowed Penn State to use him as a 3-down defender. He does a nice job of forcing running backs to bounce outside and while he doesn't always make the tackles on those plays, his athleticism and pursuit speed allows him to force running backs out of bounds. He has a multitude of snaps from both a 2-point and 3-point stance on the edge which gives scheme versatility to play outside in a 3-4 or with his hand in the dirt in a   4-3 He does do a great job of attacking the football and forcing turnovers by trying to strip the football or punching at it to loosen grips. He's a high motor player that plays with relentless effort and should find himself impressing coaches in interviews as well as workouts.

In order to find success in the NFL he has to become a much more consistent tackler because he can have some ugly moments when trying to bring down ball carriers. He takes bad angles when trying to make tackles and give ball carriers chances to cut back on his inside and break loose. He doesn't do a good enough job of wrapping ball carriers when he makes contact and too often falls victim to stiff arms. He's lighter than most defensive ends in college football, despite his rocked up and powerful frame, and has fallen victim to being driven off the line by offensive tackles when run blocking. He has struggled mightily against pulling guards as he struggles to deal with the momentum they bring when they turn into the lane. You have to wonder with Arnold Ebiketie if he benefited from Penn State ridiculously talented defense because while he certainly showed in 2021 that he can be a force off the edge, that defense he played allowed him more time to sack the quarterback and the front seven he was on made running the football difficult for offenses and allowed him to make plays in the backfield. He has a filled out and complete frame as a prospect and adding more size to his frame to better handle the rigors of run defense could diminish his frame.

Arnold Ebiketie locked himself a draft selection after the 2021 season which saw him help rejuvenate a Penn State defense that was missing a consistent pass rush in 2020. He helped stabilize the blindside edge for Penn State and made the lives of BIG-10 quarterbacks very difficult. His excellent athleticism and relentless effort is what has made him a rising prospect in the 2022 NFL draft. If he can get with a defensive coordinator can put him in favorable situations and if given time to develop and polish his craft on defense he could be a quality starter in his career.