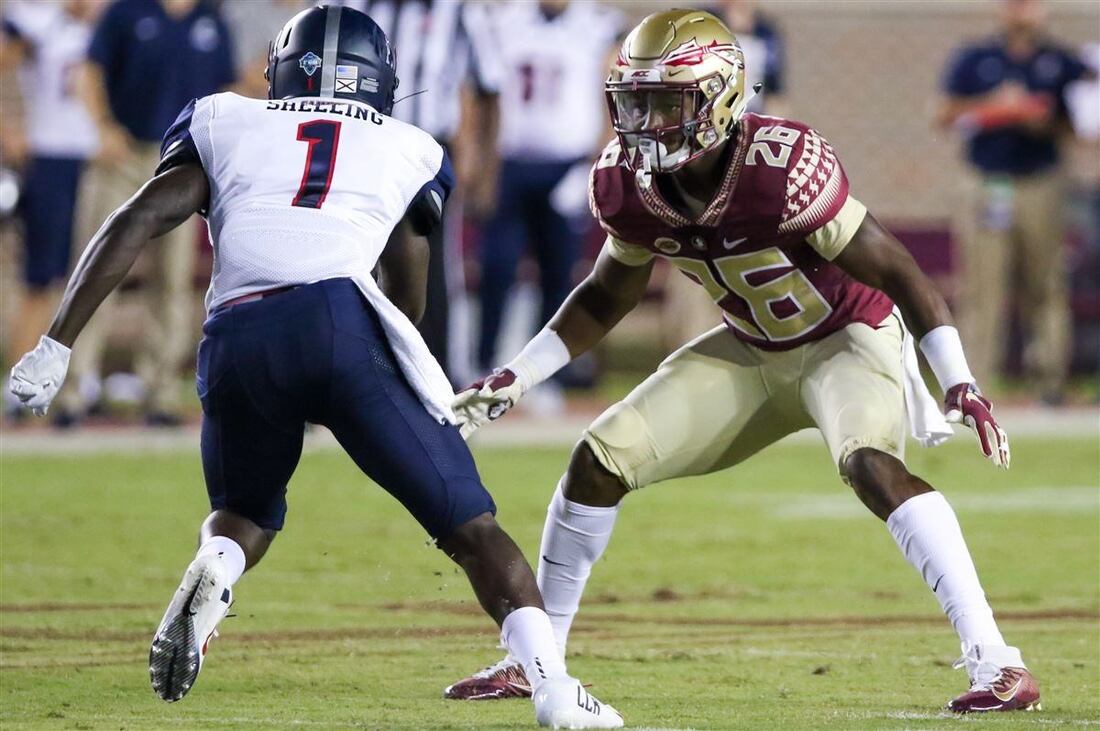 There may not have been a more feared cornerback in the NFL during the 2000's than Asante Samuel with his hall of fame level ability to jump cut routes and pick off passes and now his son, Asante Samuel Jr., has an opportunity to carry the torch. Asante Samuel Jr. is a 5'10" and 185 lbs. cornerback that plays football the way a cornerback of his size should with a feisty style of play and great effort in all phases. His father was one of the most explosive defenders in the NFL and clearly the apple doesn't fall far from the tree with jr. 's ability to explode off his feet and make a play. He loves to jump cut routes, just like his dad, and clearly has picked up some tricks from watching Sr. play. He's very good at getting his hands on the ball and attacking the receiver at the catching point, usually resulting in an incomplete pass. Very athletic with excellent change of direction skills to make a play anywhere in his area. Very competitive in coverage and will let the receiver know when he beats them. Has played in the slot and on the outside, and has thrived at both positions. Florida State trusted him to play on an island in some games and he did his best to prove them right. He's a very aggressive man coverage cornerback, like his father, and does an impressive job of mirroring his receivers and taking them out of the play. Press coverage skills are there but has only found success in the slot on a consistent basis when he can match-up with receivers that are close to his size. He's at his best in zone coverage where his agility and explosiveness can react to throws and cover a large area. He's got excellent speed and even better quickness to match-up well with some of the best athletes in college football and never seems to be outmatched by any receiver he covers. He's an aggressive tackler that has on occasion suplexed running backs and receivers, showing just how aggressive he could be.

He's not a good tackler when it comes to technique and is going to face real troubles early in his career if he doesn't improve. He's either tackling really high or really low and on occasion will find himself in the dust of ball carriers. His size limits his ability to cover bigger receivers that bully him out of press coverage and beat him in jump ball catches. He's not going to be as effective in 50/50 ball passes and will struggle in the redzone on fade routes early on. Unlike his father, he has very bad hands and has dropped a lot of interceptions in his two years playing at Florida State. Press coverage is ineffective on the outside and will have to rely on his man and zone coverage skills to survive. He plays on a very good Florida State defense with talent all along the defensive line and in the secondary and he does benefit from bad passes from quarterbacks under duress.

He appears to have developed a lot of what his dad did in the NFL and is transferring those skills to his early career. He's got the bloodlines and skills to succeed in the NFL and teams, especially those that employed his father, are going to want to get him on their squad. He's a great option in Day 2 of the draft and I would be shocked if falls to Day 3.