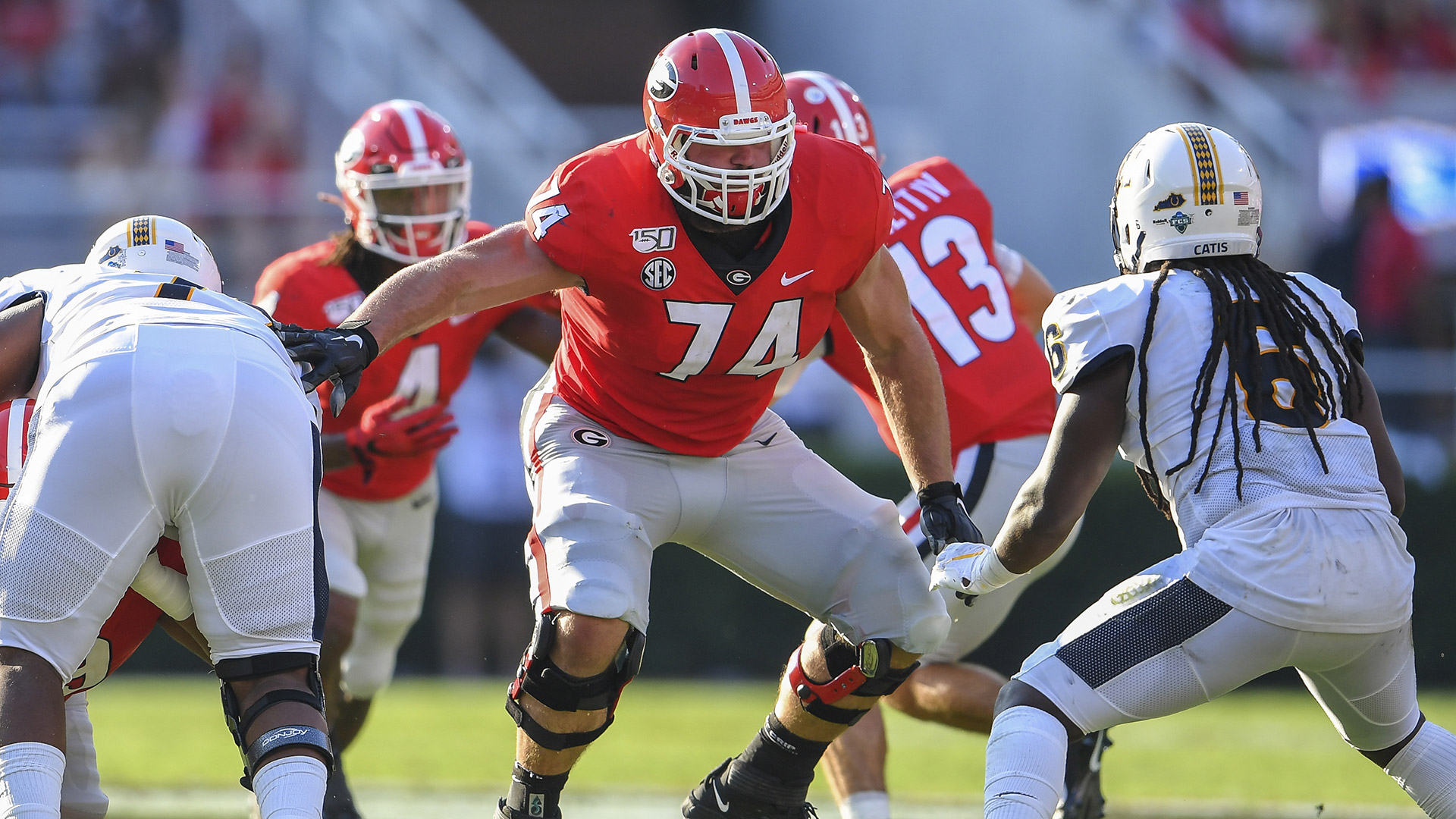 Georgia has been producing offensive lineman that are absolute monsters in the run game for some time now and Ben Cleveland certainly fits the mold. He's a monstrous 6'6" and 345 lbs. with a tremendous amount of muscle and power. He's bulldozed in the run game when he gets leverage over his man and will drive them backwards. He's explosive out of his stance in the run game and excels in one-on-one battles. He's good at turning his man out of the rushing lane and allowing his running a clean hole to run through. He's very good in power run scenarios and short situations where his power and size are great assets. He has good length in his arms and very strong hands to hold onto his opponents and prevent them slipping off. Does well when pulling to pancake defenders when turning the corner and is good at taking out the first line of defense in the second level of a defense. In pass protection, he has good technique when defending against spin moves and counters and does a good job of recognizing stunts and twists. He's a high effort and high motor lineman that will bring his "A" game on every play. He does a great job of assisting on double teams and will be a great asset to an NFL offensive line on combo blocks. He has more than enough power in his base and surprising balance in his feet to fend off bull rushes and can be a menace if he gets his man off balance as he will drive them into the dirt. He has a great punch that's even more effective given his length and upper strength. His flexibility also helps out a great deal on bull rushes as well and it allows him to reestablish his base quickly. He has decent hand fighting skills and will only improve given his length.

He's either winning big or losing big on the line due to his inconsistent pad level and leverage when engaging defenders. When he has faced short and powerful defenders that can get underneath his pads he can get thrown off balance and find himself going backwards. He struggles to regain his base when this occurs and can leave holes on his side of the line for other defensive lineman to take advantage off. He's prone to getting cut blocked by defensive lineman and it leads to blitzes up his gap. His hand fighting is still a work in progress and he can struggle against pass rushers that can effectively keep him out of their chest. He really has issues combating speedy interior lineman and will need to work on his footwork and pad level to better handle the rigors of the NFL. He's an average athlete when it comes to agility and speed and can have issues with making blocks in the second level of a defense as well as effectively handling blitzes in his gap.

​Georgia offensive lineman are hot commodities for teams looking to boost their run game and Cleveland's mammoth size and power will certainly translate in the NFL. He will need to grow as a pass protector, especially with NFL defensive lineman becoming faster and more elusive. He's a good prospect with high upside but will need help getting his pass protection technique up to NFL standards.