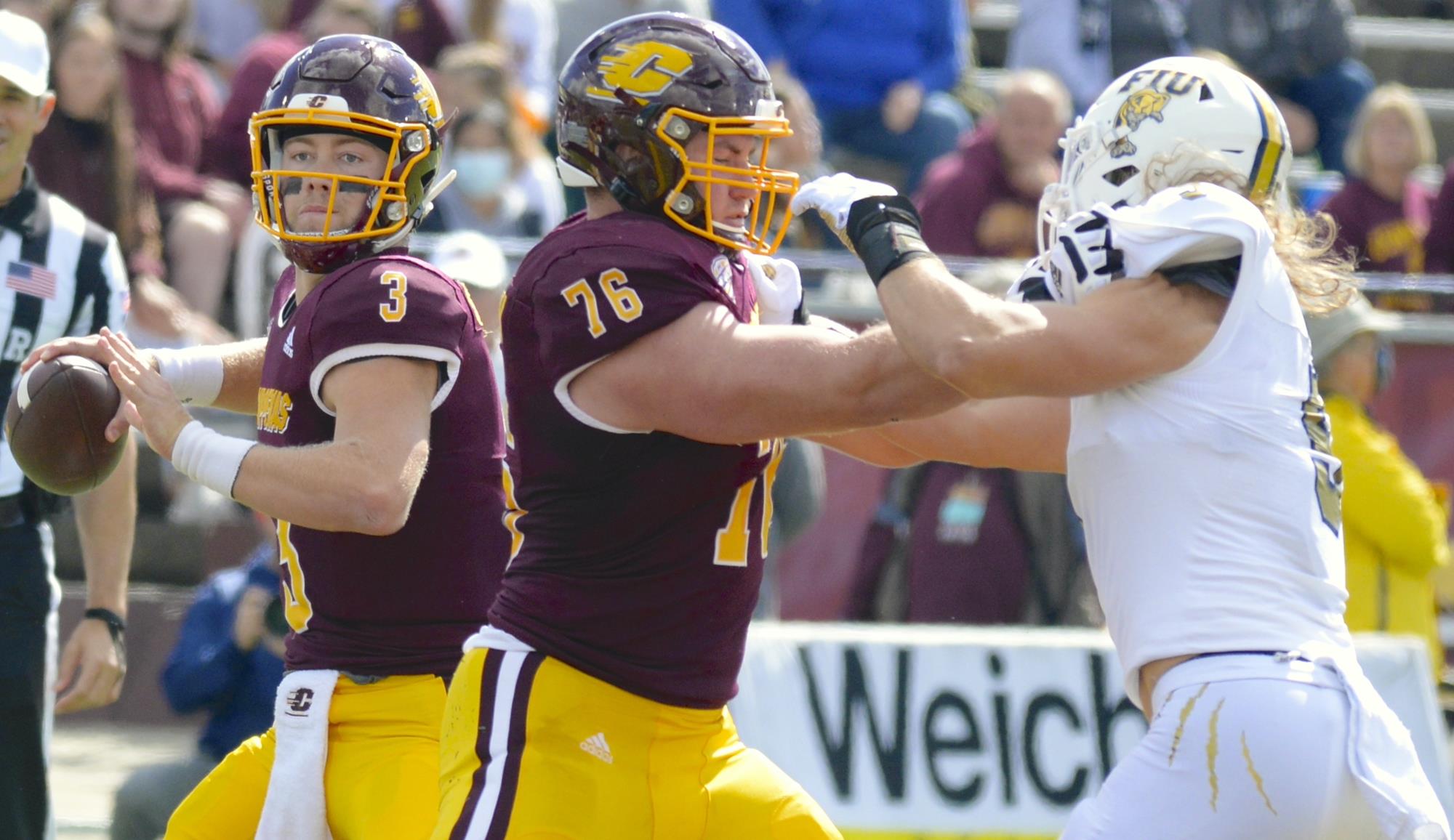 Photo by Jack Reeber-Central Michigan Athletics
If there is a potential draft story to be talked about from January through April it's probably Bernhard Raiman's because Austrian born football players who are recruited by Central Michigan to play tight and then move to the offensive line after two years of playing his previous position and somehow some way with zero experience show themselves to be a high profile prospect at the position isn't exactly a common story line in pro sports. He was a multi-sport letterman at Central Michigan with prowess both in track and field as well as wrestling, both sports can be seen from him on the football field. At 6'7" and 305 lbs., Raimann possesses a rocked up muscular frame, brings elite length, exceptional athleticism, great power, and a relentless work ethic. Even for a man his size, he brings phenomenal arm length for the position and has the physical tools to be a monster on the blindside. He possesses exceptional athleticism given his time playing tight before his offensive tackle and he has the potential to be an exceptional pass protecting tackle with his ability to mirror edge rushers and keep them a safe distance from his quarterback. He has excellent explosiveness in his base and of all his faults as a prospect, I never see him get beat around the edge at the snap. He possesses excellent foot quickness in pass protection as he can mirror speed rushers effectively on the edge and has more than enough speed to ride rushers out of the pocket. He possesses a powerful punch when he lands it and has excellent grip strength to lock into defenders and keep them close. He possesses a powerful base with thick trunk-like legs and elite level hip flexibility and knee bend which allows him to absorb bull rushes and take control of his opponent quickly. In the run game, he displays excellent power and explosion out of his stance and can create rush lanes off his side very early if catches his lineman off guard. He has excellent leg drive with his powerful base and has collapsed defensive lines on outside runs when he gets good leverage. He's probably going to light up the 40 yard dash at the combine among offensive tackle prospects because he's been seen downfield 20+ yards making blocks because even at his size, his tight speed still hasn't left him. He's more tenacious as a blocker than nasty but he's shown the ability to run over defenders and finish his blocks as his sheer size and athleticism can often overwhelm defensive lineman. Just based on his journey at the position you tell that if he has to put the time and effort into a position to become great he will do so at a moment's notice and NFL coaches crave players with such work ethic and determination. His development speed is also something to admire given how difficult the offensive tackle, let alone blindside tackle, is to play and to only have two seasons under his belt shows his high football IQ and overall IQ as well.

Bernhard Raimann is exactly what you would expect from an Austrian-born left tackle prospect who came to Central Michigan as a tight end and played the tight end position his first two seasons because he's as raw as I have ever seen an NFL left tackle prospect be in the draft. He struggles to keep his pad level low both at the snap in pass protection and coming off the line as a run blocker not just because of his huge 6'7" frame but also because he has yet to make it a part of his game. His punches are inaccurate and timed very poorly which often results in him getting swam moved or spun on quickly in his pass protection forcing him to make up his ground quickly. He struggles to recognize and react to stunts, twists, and blitzes directed at either his inside or outside gap and will need to be substantially coached in this area before taking the field in the NFL. His footwork and can be all over the place on the edge and is guilty of making false steps in his pass sets and protection, giving edge opportunities to slip by him quickly. His balance is a huge issue for him as he too often doesn't maintain a wide base in both the run and pass game and making that a more consistent part of his game will benefit him greatly. He has issues with dealing with powerful edge rushers and lineman with most of his issues stemming from his ability to keep his chest clean which is shocking given his length. He needs to take better angles in the run game as a blocker as he can miss blocks in the second level or when the running back cuts back hoping for an extra block. He would benefit from adding about 15-20 lbs. of muscle to his frame before taking an NFL field because despite his power in his frame, he has more room to bulk up and NFL defensive lineman will eat him alive if he's underweight. He possesses the build to play guard or center and should be strictly an offensive tackle prospect heading into the draft.

Bernhard Raimann is the definition of a project prospect but the tools and traits for a great NFL offensive lineman are there to develop. He's not a prospect that I would put on the field immediately unless he develops very quickly and learns from his mistakes on the field, for which there will be a lot of regardless, but in year 2 or 3 I can certainly see him taking over the starting offensive tackle position and rapidly developing into a potential stalwart offensive tackle. The tight end to tackle transition isn't common but players like Jason Peters and Joe Staley made similar transitions in college and are going to be hall of fame offensive lineman someday. While I'm not Bernhard Raimann has hall of fame potential, you can't discount him because of an on the fly position change in college and with his ability the skies the limit for him as an NFL player. All he needs is the right coach that can chip at this giant slab of marble he is as a prospect and patience in his development to make an  impact in the NFL.