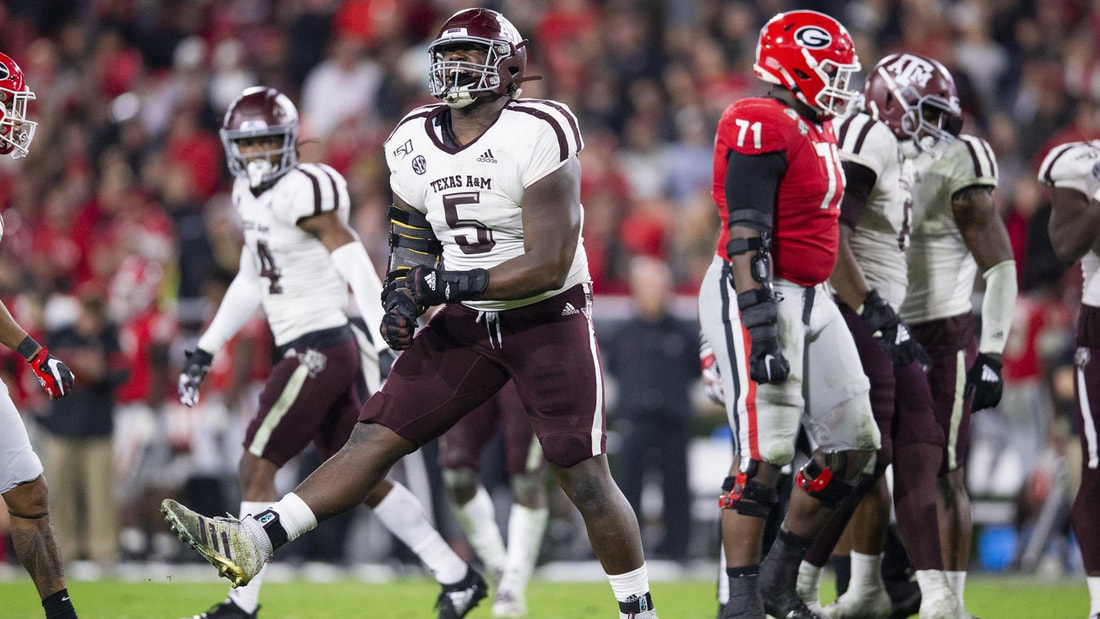 Texas A&M featured one of the best defenses in the country in 2020 and Bobby Brown III was a cornerstone piece of their defensive line and should be on the radar of all 32 teams. He's a very powerful 6'4" and 325 lbs. with a lot of muscle and a lot of explosiveness. He's one of the best bull rushers in the draft who walked back some of the best offensive lineman in the country and he has long arms to pair with his strength. He possesses excellent first step quickness for a man of his size and is usually getting into his opponents chest pads before they have a chance to counter. He possesses incredibly strong hands and once he gets a hold of his lineman's pads, nothing is going to break his hold. His bull rush is NFL ready and it's going to be a problem for  NFL offensive lineman early in his career. He's a great run defender who relishes getting dirty in the trenches and has no issue eating blocks in order to let his teammates flourish. He has a violent uppercut club move that can rock an offensive lineman sideways, allowing his fellow teammates to take advantage of the open gap. He's stone in the middle of a defensive line and when he digs his feet in the ground blockers can't move him. He's violent and nasty in the run game and will bull through blockers to collapse rushing lanes. His grip strength is really impressive when making tackles as he's usually having to arm drag guys to the field. He does a good job of being aware of where the play is going and is never far from where it ends. He's quick to recognize screen plays which shows an above average level of football IQ. He proved to be one of the more consistent pass rushers in college football last season using his bull rush up the middle to collapse the pocket. He's a far more flexible player than you think a 6'4" and 325 lbs. interior lineman could be but he does a good job bending and contorting his body to get into rush lanes.

He's not going to chase down ball carriers nor is he much of a factor when making plays in the backfield. He doesn't possess a lot of technique as a pass rusher and it shows why he didn't produce on the stat sheet until this year. He lacks a lot of the pass moves in his repertoire which is troublesome for him when he faces guards that can match his power. He has poor pad level and usually finds himself taking a much more difficult slog to the quarterback than need be. He's not a versatile defensive lineman as he has only ever played the 1-tech tackle in the Aggies 4-3 scheme and I don't know if he could play any other scheme. He has an inconsistent motor on the field and can at times ease up when he feels a play is out of reach. He doesn't extend his arms into passing lanes enough even though he clearly has the size and length to effectively tip passes.

Bobby Brown III, if put into a 4-3 scheme in the NFL, will be a steal for a team because he's perfectly built to disrupt rush plays and clog lanes. He's strength and size make him a potential fit as a nose guard in a 3-4 as well but that's not a risk worth taking in my opinion. If you're a team that runs a 4-3 and needs help against the run, you absolutely cannot pass on him.