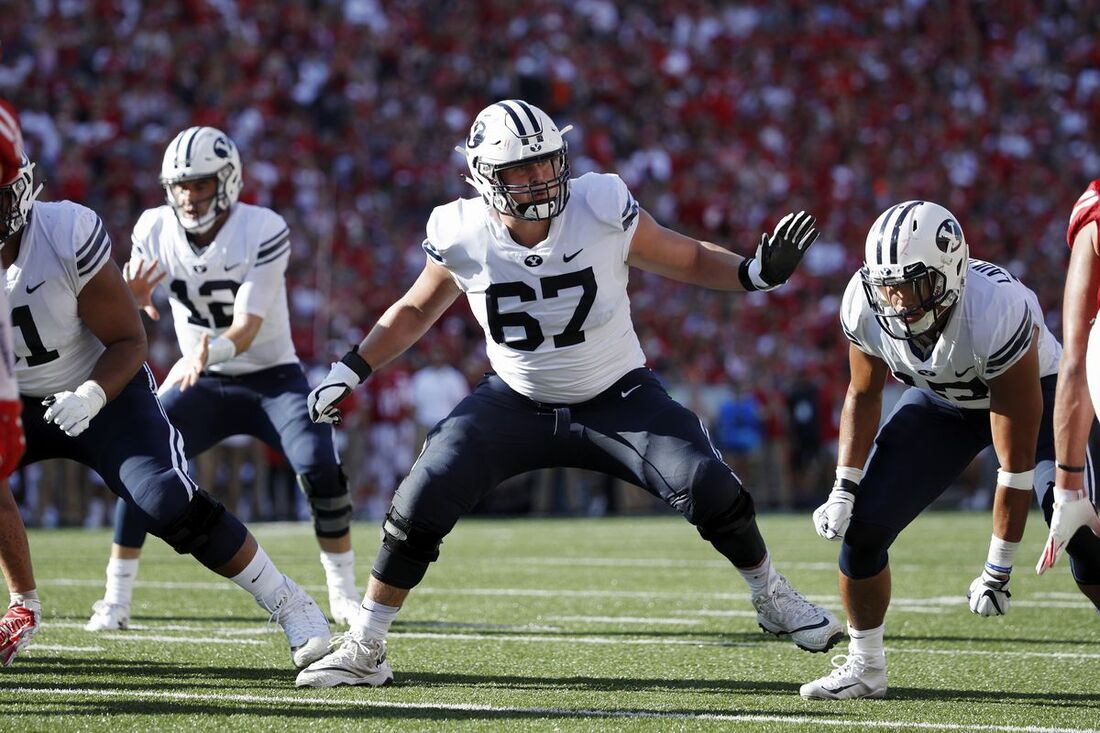 Zach Wilson wouldn't be nearly as productive with Brady Christensen blocking his blindside in 2020 and he should get a call on draft day. At 6'6" and 305 lbs. with great length and a very high football IQ. He possesses great length in his arms and very good power in his upper body. He has very strong hands that can be like vice grips when synched in. He has a wide base and a strong lower body that helps him withstand bull rushes off the line of scrimmage. He always plays with great pad level and rarely finds himself on the back pedal. He has a good and strong punch and does a great job of driving opponents off the line. He's very good at securing his first block before moving onto the next in the run game. He has smooth lateral footwork and does a decent job of keeping his man in front of him. He's a very smart offensive tackle who can diagnose blitzers off the edge, stunts and twists that are imminent, and does a great job of keeping his inside gap clean. His long arms help keep edge rushers from getting into his chest and he makes sure they have to take the long road around him in order to get to his quarterback. He has very smooth lateral agility and possesses very clean footwork. He gives intense effort on and off the field and is going to be a great team player in the NFL.

He's an average athlete at best and his lack of such skills rears its head when facing athletic edge rushers. He struggles with keeping his opponent in front of him when they have a good get off at the snap and often they can find themselves with a shorter path to the quarterback. His lateral agility is questionable and it can get him into trouble against players that can stutter-step and swim by him. His hand placement in his punches is very poor, often outside the numbers, and it can lead to yellow flags getting thrown. He overextends himself too often trying to keep up with athletic edge rushers and he's going to seriously struggle in the NFL if he doesn't adjust well enough.

Brady Christensen is going to ace interviews and impress coaches with his intellect and if he can show improved athletic ability at his pro day, he could see his stock rise. He was a key part of a highly potent BYU offense and the team wouldn't have gotten as far without him. He has the potential to be a starter in the NFL but will most likely be a quality backup.