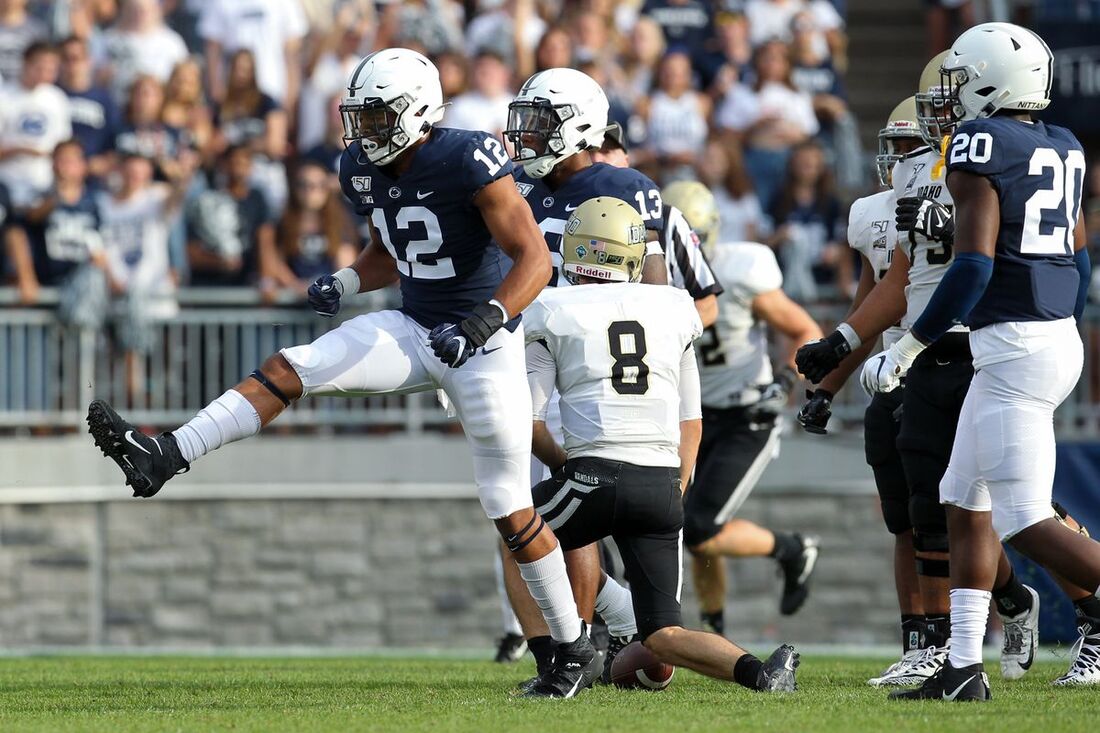 Matthew O’Haren-USA TODAY Sports
Penn State has been regarded as "Linebacker U'' for ever in the NFL as they allows seem to send pro talent into the NFL with a high success rate after Defensive Rookie of the Year Micah Parsons lit the NFL on fire with his play in 2021 and teams will be looking to cash in again in 2022 with Brandon Smith. At 6'3'' and 245 lbs., Smith brings freakish athleticism and instincts to the linebacker position. He has a muscular frame that's got plenty of room for more which allows him to potentially become a more versatile prospect. He's always around the football as a MIKE linebacker for the Nittany Lions which is something that you always want to see from the captain of your defense. He possesses cornerback speed at his size and can make plays from sideline-to-sideline. He possesses excellent pursuit speed when chasing ball carriers and is no stranger to running down receivers and running backs with daylight in front of them. As a blitzer, he flashes that twitchiness, agility, and explosiveness that the great NFL linebackers possess and if offensive lineman don't account for him on the blitz he can turn into a game wrecker for Penn State. He possesses phenomenal length for his size and can outreach guards and tackles when blitzing the line. He does a nice job of using his quick feet and agility to make blockers miss him in the second level and make plays behind them. In zone coverage, he flashes very rare range for a linebacker as he can cover a lot of ground in the middle of the field. His excellent size and length for a linebacker allow him to force quarterbacks to make difficult throws around his area which has led to a lot of bad passes towards. He covers tight ends very well on short hitch routes and does a nice job of attacking the football at the catch point when he times his jumps on the throw. He reads the quarterback's eyes very well and is usually first to arrive on shallow throws. He's very good at recognizing screen passes and does a great job of wrapping and bringing down ball carries quickly. In man coverage, he can match up on tight ends very well with his athleticism and size and has shown the ability to cover them both inline and in the slot. In run defense, he possesses phenomenal lateral agility and moving up and down the defensive line on run plays is one of his specialties as a prospect. He flows very well with the trenches and doesn't over shoot his gap when attacking rush lanes. He's a freight train of a hitter when has a clean shot and does a nice job wrapping up ball carriers when he doesn't. He does a nice job of attacking the football when tackling and while he hasn't had a great deal of success at putting the football on the turf, his consistency in trying is what matters. He has the build and athleticism to be more than just an NFL linebacker and I wouldn't be shocked to see coaches work him out as a pass rusher in workouts. He has played in a 3-4 and 4-3 defense for Penn State and can be scheme versatile for defensive coordinators. He's a high motor 3-down linebacker who will through and after the whistle.

Brandon Smith thrives too much on his athletic profile in college which has kept him from being mentioned among the best defenders in college football. As a blitzer, he doesn't do enough to keep his frame clean from offensive lineman and often gets caught in the wash of the line. He doesn't utilize pass rush moves when attacking the line as he fully relies on his length and speed to get through and often is forced to fight blocks to stay in the play. He doesn't disengage from blockers very well once he makes contact and will need to better utilize his hands when attacking the line. In zone coverage, he can be late when reacting to throws in his area and too often is playing catch up with receivers rather than meeting them at the spot. He needs to become more aware of receivers and tight ends movements on routes and will need to better understand how to recognize and react in order to stay on them, Sam LaPorta ate him alive on a few occasions in Penn State's upset loss to Iowa in 2021. He gives up too much cushion to tight ends and receivers and has to work back into position to make a play more often than you would like him to. He too often goes for the big hit rather than wrap up tackle and has had runners bounce off of him occasionally. He can tackle high at times and get dragged a bit by the ball carriers for some extra yards. He doesn't have great ball skills when it comes to coming away with interceptions and while that's not the biggest need for linebackers, being a danger to come away with footballs does have a minor effect on quarterbacks. Played mostly as an inside linebacker with the occasional chances to rush off the edge and expecting him to turn into Micah Parsons as both an off the ball linebacker and edge rusher in the NFL would unreasonable expectations.

I am not sure why Penn State didn't utilize him more as a blitzer in college the same way they used Micah Parsons in 2019 and I think they might have under utilized him in that role. His freakish ability to make plays all over the field and explode through the offensive line is evident but consistency is what teams want from players like him. He has all the tools to be a perennial pro bowler but consistently playing to his talent is what teams will be looking for. If he can polish his technique and play with more consistency, he could be a quality starter in the NFL at the very least and a potential pro bowler in his career.