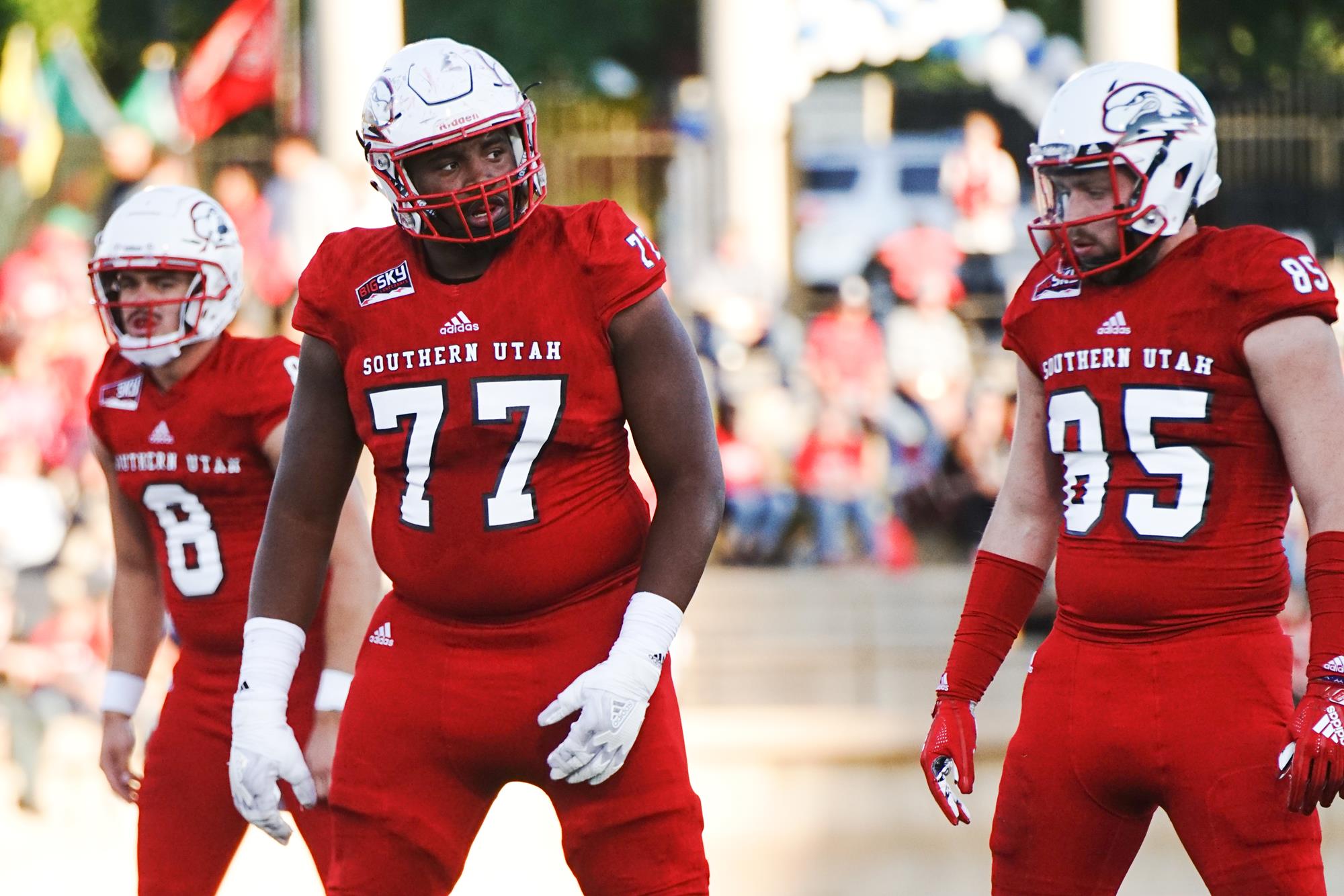 Photo by Southern Utah Athletics
Southern Utah rarely finds themselves with draftable talent on the team but offensive tackle Braxton Jones is likely to break that streak in the NFL. At 6'5" and 310 lbs., Jones brings an exceptional build with outstanding athleticism and very good power. He has tremendously nimble feet and doesn't get beaten by speed rushers very often. He's highly explosive out of his stance and his kick slide in pass protection is highly effective at giving him great positioning to mirror edge rushers. He stays very square with his opponents and has shown that he has plenty of athleticism and agility to match up with any pass rusher he faces. He possesses elite length in his arms to keep his chest from getting man handled and has excellent power in his upper body. He's proven to be very good at riding his man out of the pocket when he gets an angle and rarely has found himself getting out run around his outside shoulder. He has a very strong grip that can keep edge rushers close and tight to mitigate any counter rush moves. His powerful upper body does a very good job of quickly halting bull rushes as he can upend his opponent and force them to harder to create pressure. As a run blocker, he does show very good power at the point of contact and if he can get a good blocking angle on his opposing lineman he can level them. He's proven to be able to reach the second level to make blocks and has more than enough speed and agility to be a terror past the line of scrimmage. He can have a nasty streak to him in the run game when he feels he's dominating and could be a reliable option as a swing tackle on run downs. He's very good at turning edge rushers and defensive lineman out of the hole which is often the route he takes when making blocks in the run game and the run based offense he was on trusted him quite often as a lead blocker. He's a proven pulling lineman with his speed for his size and can lead a convoy on potential game breaking runs. He's a tough and rugged competitor that has shown an ability to play tough competition and give it his all on the field.

He's a very raw prospect at the offensive tackle position in both the run and passing game and he comes into the NFL as more of a project than a potential starter. He struggles mightily with reacting to stunts and twists targeted at him and too often is late to ward off defenders taking his outside shoulder. He's inconsistent at recognizing blitzers both off the edge from corners as well as linebackers attacking his inside gap and fixing this issue will need to be his top priority for a successful career. His punch out of his stance is very underwhelming and it has often led to defensive lineman to to simply power through and engage him effectively. He does a poor job of keeping his chest clean from defenders despite his length and often is inconsistent at hand fighting effectively. He's inaccurate with his punches as well as and too often finds his hands getting swiped away from charging defensive lineman. His anchor is poor at this point in his career as he doesn't possess enough flexibility to halt rushers and nor does he possess great power in his lower half. He doesn't finish blocks very often and doesn't appear to possess the leg drive to maul defensive lineman on a consistent basis. He plays with relatively poor pad level in the run game and that has hurt his ability to effectively drive defensive lineman off the ball. He's not very effective at attacking defenders in the second level despite his athleticism often due to poor angles and an inability to redirect his frame to square up with his target. Southern Utah rarely faces Power 5 competition and against Arizona State University in 2021, PAC-12 School, Braxton Jones got beat quite a bit by more battle-hardened edge rushers.

He's certainly a project currently in his NFL career and I wouldn't trust him to start his rookie year outside of a potential swing tackle role or as an extra lineman in a short yardage play. He's got all the physical traits to be a very good offensive tackle with elite length, exceptional athleticism, and prototypical size and teams are always looking for offensive lineman to coach up as it has worked very well in the past. Offensive tackle is one of the few positions NFL teams will experiment with and take flyers on highly raw prospects and Braxton Jones is likely to be that guy in 2022.