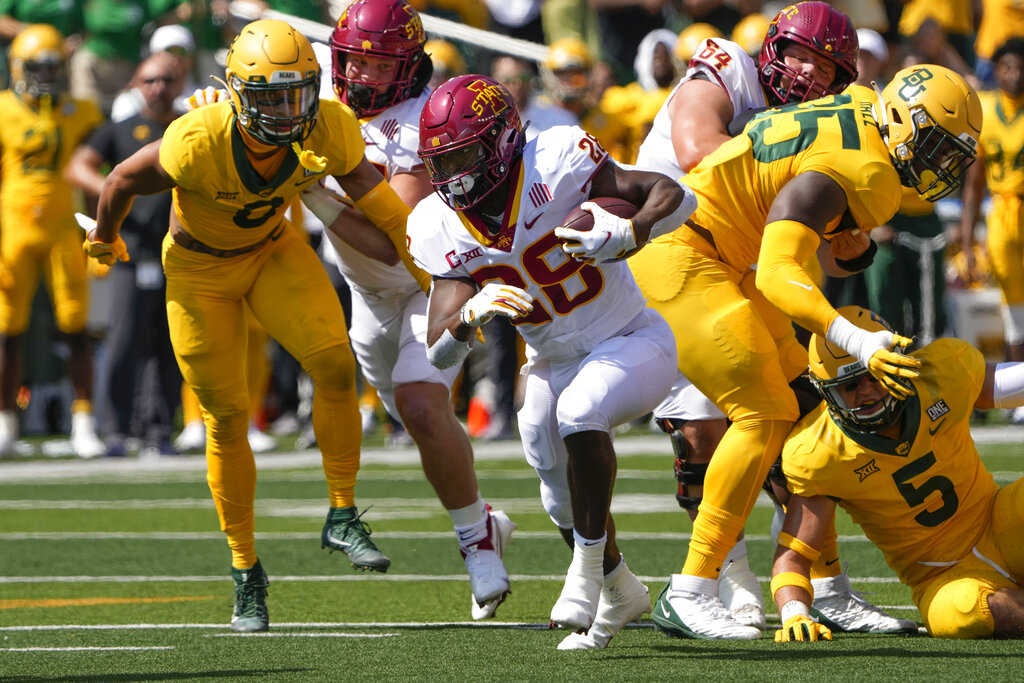 Photo by Jim Cowsert-Associated Press​
​The Iowa State Cyclones put together a decent squad the past couple seasons but the heart beat of the team came from the running game led by Breece Hall. At 6'1" and 225 lbs., Breece Hall brings exceptional size, power, athleticism, and ball carrier vision to the running back position. Hall has been the most productive running back in college football for two straight seasons now and Iowa State would certainly not have been as successful if not for Breece Hall being a defenses #1 concern. Breece Hall for 225 lbs. possesses exceptional quickness and agility for his size and has made many defenders look silly when they try to tackle him. His jump cuts are crisp and timed to perfection in the open field and allow him to evade a defender and keep his speed for big runs. He possesses elite ball carrier vision to find holes opening in the trenches to run through as well as bounce outside when he knows he can't make them which has resulted in very few negative runs in his career. He hits the hole with excellent burst and power and can churn through the trenches to pick tough yards if need be. He was a huge asset in 2021 when it came to picking up short yardage for the Cyclones as he was very good at zone running and waiting for holes to open up in the line for him to pop into and pick up the line to gain. He can make defenders miss in the phonebooth with any one of his evasive maneuvers and does a phenomenal job of picking as much yardage as he can when he gets caught. His powerful frame is very helpful at running through contact and breaking off bad tackles which he did on a regular basis for the Cyclones. His quickness and agility allow him to be a difficult running back to square up on when making tackles and defenders need a strong grip to hold onto him if they miss. He can carry defenders for extra yardage if they tackle too high on his frame and has picked up tough yards on many occasions for the Cyclones. He has a very powerful stiff arm that can keep defenders away from latching onto him. He has excellent speed and although he's not a burner he has more than enough juice to hit a hole and break huge runs for touchdowns which he did on a regular basis in his last two seasons for the Cyclones. As a receiving option, he possesses elite hands for the running back position with his ability to bring down difficult throws outside his frame, sometimes with just one hand. He's a very willing blocker in pass protection and can be trusted to pick up blitzers.

His blocking technique needs work as he too often goes for the cut block on blitzers rather than squaring up and taking them on. He doesn't possess the game-breaking speed NFL teams covet in running backs and will need room between him and the guy behind him to break off long runs. He's little quick to bounce runs outside the tackles either because he doesn't trust his line to open up holes or because he's so confident in his ability to make people that he just does it by himself but either way teams are going to want him to stick the game plan and not deviate and may need his do-it-all style of running tempered in camp. There is a fair amount of wear when it comes to Breece Hall as a prospect with exactly 800 touches in his career and I would worry about his overall longevity in the NFL. His spin can be timed very early in his runs often to cut back out of lanes that appear to be relatively open and making more confident and patient when running between the tackles will be key to his development in the NFL. He's limited as a route-runner from the running back position and was more of a screen option or safety valve.

Breece Hall's potential as an every down running back in the NFL is tremendous with his build, athleticism, elusiveness, and skills outside of toting the rock. He can clean his blocking and expand his ability as a route-runner in the NFL and if he accomplishes these detractors in his game he could be a very good bell cow back in the NFL. I do worry about the amount of tread on his tries so teams might want to think about him as an asset on a pass happy team rather than a #1 option in the run game but I know that he will be at the very least a highly reliable running back in the NFL.