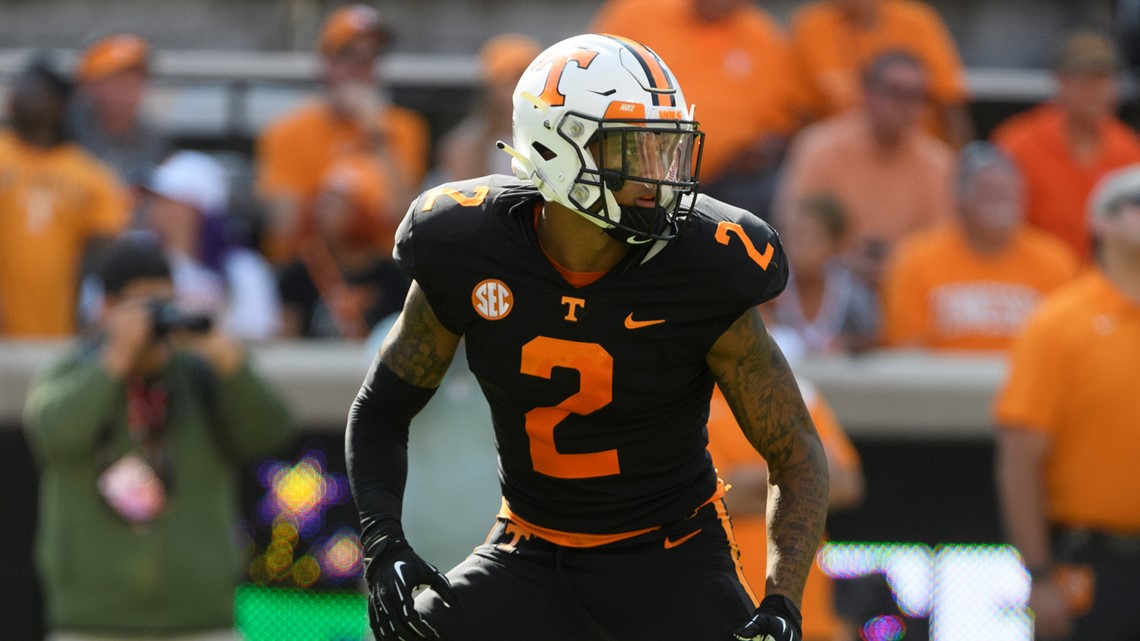 Photo by John Amis-Associated Press
The Tennessee Volunteers haven't featured a great many high profile prospects in recent with only Derek Barnett in 2017 being selected in Day 1 but Alontae Taylor out Tennessee, while not a Day 1 pick, can be one of first Top 50 picks to come out the program in years. At 6' and 199 lbs., Alontae Taylor brings elite athleticism, great length, and excellent aggressiveness in coverage. Alontae Taylor was a fringe Top 100 player but after a tremendous Senior Bowl performance and great NFL combine, he's rocketed up draft boards and should certainly find himself getting a call in Day 2. In man coverage, he's feisty at the line of scrimmage with his jam at the snap which often helps establish some leverage for him early in his receivers route. He's sticky in man coverage without getting to grabby downfield and he has more than enough length in his arms to shrink passing windows to his receiver. When asked to go vertical with his receiver he's proven on tape, and at the combine, to be able to stay with any receiver he faces no matter how fast. In press coverage, his aggressiveness helps him mitigate receivers from employing quicker routes such as sluggo's and quick hitches that can fool him and he's big and strong enough to handle receivers that possess a bigger build than most. He's sticky in press coverage but does a nice job of not becoming overly aggressive and forcing flags in his direction. In zone coverage, he displays excellent range and awareness of his receivers. He's very capable of covering a large area in zone and has shown the ability to read the quarterback and receivers and recognize where he wants to throw the football. His burst on the football when he diagnoses where the play is going is impressive and he does a great job of getting to his target quickly. His range as a corner was often a deterrent for offenses and while he certainly wasn't a shutdown corner in college, he clearly distinguished himself as a player not to test in coverage as his Tennessee teammates weren't at his level. In run defense, he plays with malicious intent from the cornerback position as he wants to hit ball carriers with everything he has. He does a nice job of wrapping up ball carriers and is aggressive in his attempt to bring them down. He's proven to be very effective at wrapping up ankles and can be trusted to make open field tackles. He possesses a very high IQ considering that he turned into one of the SEC's best cornerbacks despite only playing the position since 2018 after originally being recruited to play receiver. He's proven to be good at stripping the football from ball carriers and He was the leader of a decent Tennessee defense in 2021 and his excellent play often energized others and teams are going to love his presence in the locker room. He has a high motor on the field and often isn't too far from where a play ends, showing his competitive fire and toughness. He's also inspired the team with his willingness to play through injury and it shows that he's a team player through and through.

He's more straight line speed than agile and shifty receivers that utilize route-running and quickness over pure athleticism and physicality have beaten him in the past. He's a converted receiver whose only experience at cornerback came in college and a lot of his issues with dealing with quickness come from him playing with a high back pedal which mitigates his ability to keep up with his man. He's often playing catchup in man coverage when asked to give cushion to his receiver and far too often is having to play cleanup tackling rather than making a play on the ball. His ball skills are questionable which is odd considering his former years playing receiver and learning to better adjust to the football needs to be coached in him. While he has scheme versatility, he's only been used as an outside cornerback in his career and I would expect him to bring a team a great deal of positional versatility. He's often late turning around for the football in the air which has led to some missed opportunities as well as caught passes that shouldn't have been caught. He needs to work on timing his jumps for the football better to have more chances at disrupting or even intercepting the football. His angles when jumping routes are often inconsistent and can give receivers chances at the football which has often led to receptions that shouldn't have been.

Alontae Taylor has been one of the most impressive players throughout the draft process and teams have to be putting him high on their board after his impressive combine that answered any questions about his athleticism. If he can simply keep polishing his craft and improve his ball skills he can reach his potential in the NFL. He's got all the moxxy and talent to be a quality NFL corner and teams in need of a Day 2 pick to improve their secondary should keep an eye on him.