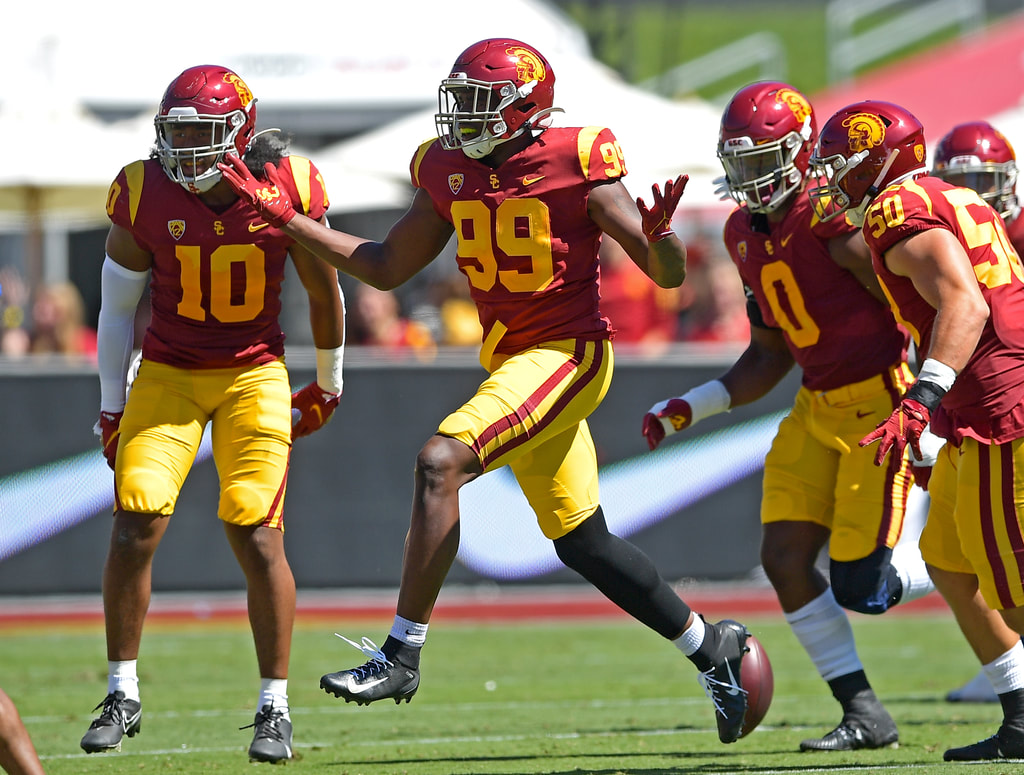 Photo by Jayne Kamin-Oncea-USA TODAY Sports
USC's Drake Jackson has been one of the most anticipated USC players to come out of college in a very long time after a phenomenal freshman year that saw him dominate the PAC-12. Jackson brings prototypical size at 6'4" and 255 lbs. with excellent length and athleticism. He's a phenomenal athlete with impressive speed and fluidity that makes him USC's most dangerous defender. He has gumby like flexibility and is at his best when he can bend the edge and rush the passer. His long arms for his size makes him a very difficult man to get a hold of. He has a lightning fast first step off the line when he times the snap right and can wreck plays early if left unchecked. He utilizes a very quick swim that, combined with his length, makes it very difficult to defend. He has a very quick and effective stutter-step and swipe move that can turn slow offensive tackles into turnstiles. He's very explosive in his lower half and can get up to top speed very quickly when in pursuit. Noticeably was double-teamed and chopped blocked in after his freshman year on a frequent basis due to his potential to wreak havoc. He has very strong hands that help him bring down ball carriers and he's a phenomenal tackler as well. He does a good job of attacking the football, trying to cause fumbles, which shows a good wherewithal for making plays. He does a great job of bursting through inside gaps when asked to stunt and can cause pressure early with his speed and quickness. He does a great job of getting his hands in the air at the line to bat down passes. Noticeably has gotten stronger in his frame from his 2020 season and does a much better job of taking on blockers and holding his ground. He does a nice job of moving down the line to make tackles on the opposite end. Added more muscle in his upper body since his 2020 and noticeably had more pop and power in his punch and still has more room to grow. He constantly has been facing double teams in his college career after his freshman season and his production at USC has been a much harder road than others on the roster. With the turmoil in USC's front office and athletic department, he has constantly had to learn new defensive schemes and plays and still has shown the ability to make an impact on the field which shows phenomenal football IQ. He also shows his football IQ in run defense against the read option as he does a great job of sitting on the edge and not biting on the run. He has far more experience in pass coverage than the other edge rushers in the draft and shows great awareness in zone coverage and has enough athleticism to cover running backs on wheel routes. He does an excellent job in coverage of shrinking throwing windows and disrupting passing lanes and can bat away footballs if need be. He also has very exceptional hands for an edge rusher and isn't immune to intercepting the football.

He's a very rare edge rushing prospect which isn't entirely his considering the turmoil he has to deal with at USC as well as COVID-19 shortening his offseason as well as cutting his regular season in half, giving him far less reps than other pass rushers in this draft it showed in his 2021 season. He doesn't know another pass rush move outside of his swim move and stutter and swipe move and expanding his arsenal is crucial to his NFL development. He plays most of his snaps from the stand-up edge rusher stance and having become more comfortable with his hand in the dirt will increase his versatility. He plays too tall when engaging offensive lineman leaving his chest exposed to getting attacked and when he does he doesn't have the strength nor any counter rush moves to shed the block and stay in the play. Although he played with much more urgency in 2021 compared to 2020, he still shows glimpses of giving up on plays and not hustling to the ball which is likely due to coaching and not his overall lack of interest. He needs to build his lower half much more to hold in the NFL against runs to make him more than just a situational pass rusher. He doesn't possess much of a bull rush and will need to work on establishing better leverage and properly using his length to make his bull rush effective.

Drake Jackson has all the makings of a tremendous pass rusher but his path to the NFL has been much more difficult than other rushers in the draft. Very few edge rushers come out of college with his intangibles and when they do they usually are the first to go in the draft. I think that if he gets paired with an experienced defensive coordinator that can energize him and polish his form, he could be a pro bowl player early in his career.