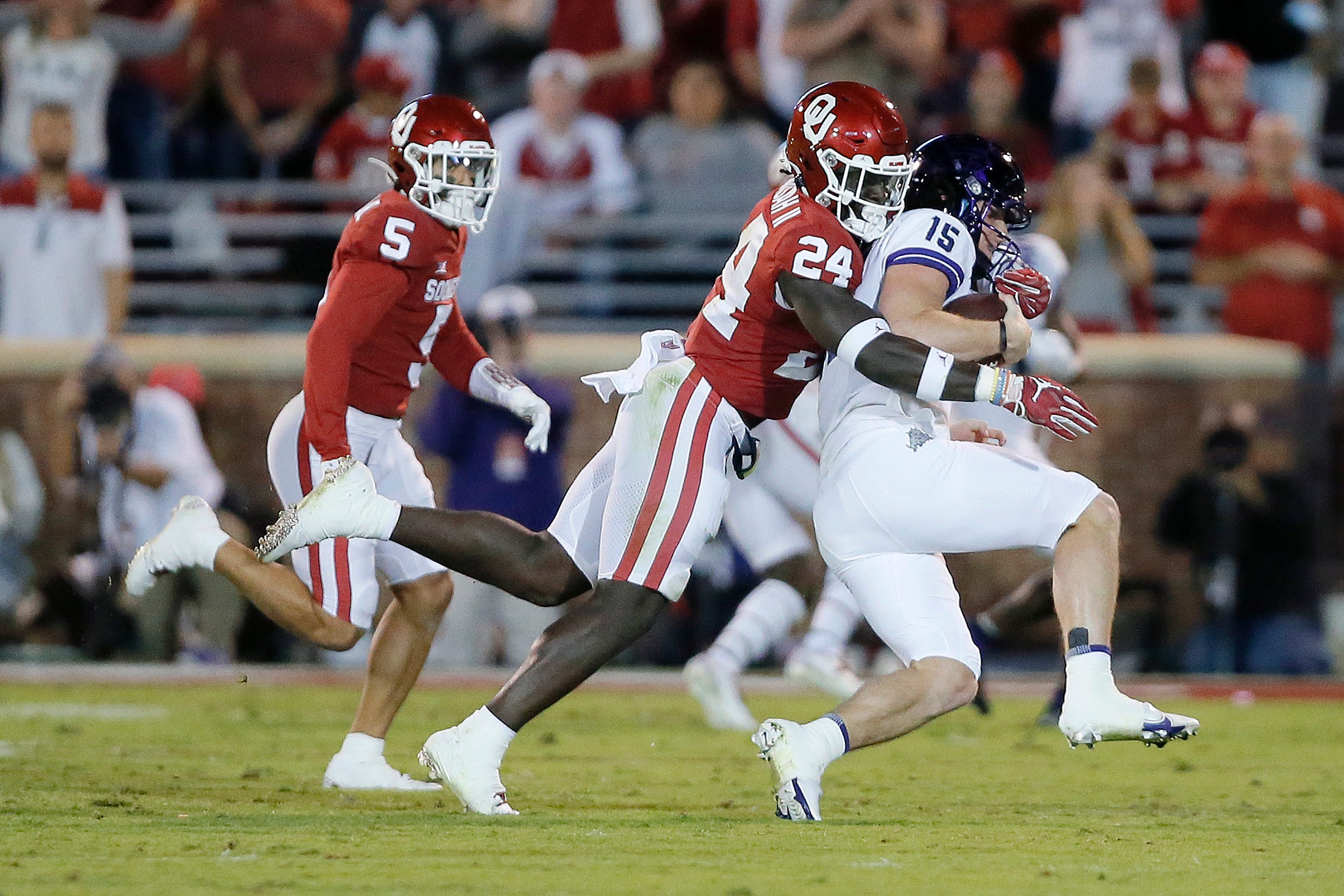 Photo by Sooners Wire
Oklahoma has been a good linebacker school the past couple drafts and Brian Asamoah certainly has proven enough in his career at Oklahoma to warrant a call on draft day. At 6' and 226 lbs., Asamoah brings excellent athleticism, instincts, and toughness to the position. Oklahoma linebackers have a tougher job than most linebackers as they often have to cover a tremendous amount of ground as they usually are the only line of defense in the run game and Asamoah certainly showed on film that he has tremendous speed and explosiveness to run down ball carriers where ever they are on the field. In run defense, he does a nice job of weaving through gaps in the line to penetrate the backfield and make stops behind the line. He does a nice job of reading the offensive line's blocks and often finds the ball carrier quickly. Rarely has found himself unable to run down ball carriers with his excellent acceleration and speed and he does a great job of establishing tackling angles that give him a shot to bring down ball carriers. He's a very good tackler with strong grip and good tackling form and when he latches onto ball carriers they usually go down. He can pack a punch when he hits ball carriers and while he doesn't level anybody, he certainly has some stopping power when he lines up his hits cleanly. He has tremendous closing speed when he locks onto his target and his patrol-like style of run defense in the front seven helped keep offenses from running though the Oklahoma defense. In coverage, he's proven to be very reliable as he's more than quick and agile enough to cover slot receivers with confidence. He's not phased by double moves off the line if he has to cover shifty slot receivers and while I certainly don't expect him to cover receivers full time in the NFL, he's proven in college that you can leave him on an island against players and survive. He was particularly good at covering running backs and recognizing screens which certainly was a big help for his team as they employ plenty of dime coverages that are often weak against short dump off passes. He's very rangy for a linebacker and did a nice job at Oklahoma of covering his area with his closing speed and vigilant instincts when it comes to reacting to routes.  As a blitzer, he's very sneaky when it comes to attacking the line of scrimmage which is helped by his shorter stature allowing him to almost duck and hide behind his lineman. He has a way of flowing with the line and popping out on the backside often surprising running backs trying to cut back which helped him make backfield tackles. He's very good at attacking the football against ball carriers and had success in college at stripping the ball for his team. He's a tough linebacker for his size and doesn't shy away from contact. He's a high football IQ linebacker that came prepared to every game and teams drafting him will be getting a player with a tremendous work ethic. He's a high motor player that brings a great competitive spirit.

If you can't tell by his size, Asamoah isn't going one to be a threat when it comes to using power and his time as a Sooner didn't see him used much as a blitzer nor was he terribly effective attacking the line scrimmage if you were looking at him from both the stat sheet and game film. He can too often find himself getting caught in the wash of the trenches when run defending and hitting the weight room to build up his frame may not be enough to make him a more effective blitzer. While he's proven to be a very good coverage linebacker, his size limitations have been an issue when covering tight ends in the slot and his ability to be reliable in the NFL at this skill is questionable. Tackling effectively can be a hit-or-miss skill for him as too often he can aim high and get dragged for more yardage before bringing his man down. When attacking the line of scrimmage he struggles with shedding blocks due to his lacking power and if he doesn't get through the line cleanly he very often fails to make a play. Not a major factor as a pass rusher as he lacks the size and technique to be a consistent presence and should be viewed as a coverage linebacker primarily in his career. As a tackler, he's too reactive at times and has been on the wrong side of a juke move and had to play catchup with his target.

Brian Asamoah is a inside linebacker prospect through and through and isn't going to get confused for some versatile hybrid defender. He's small and needs to bulk up for the NFL but he's got all the intangibles and skills to make an impact early in his career. He'll need a good defensive line in front of him that can force teams to lose him in traffic as a blitzer as well as run defense in order to be effective, however his coverage ability is certainly something that should entice teams as prospects. I expect him to compete for and eventually earn a starting job in the NFL but he'll need to build up his frame to have success.