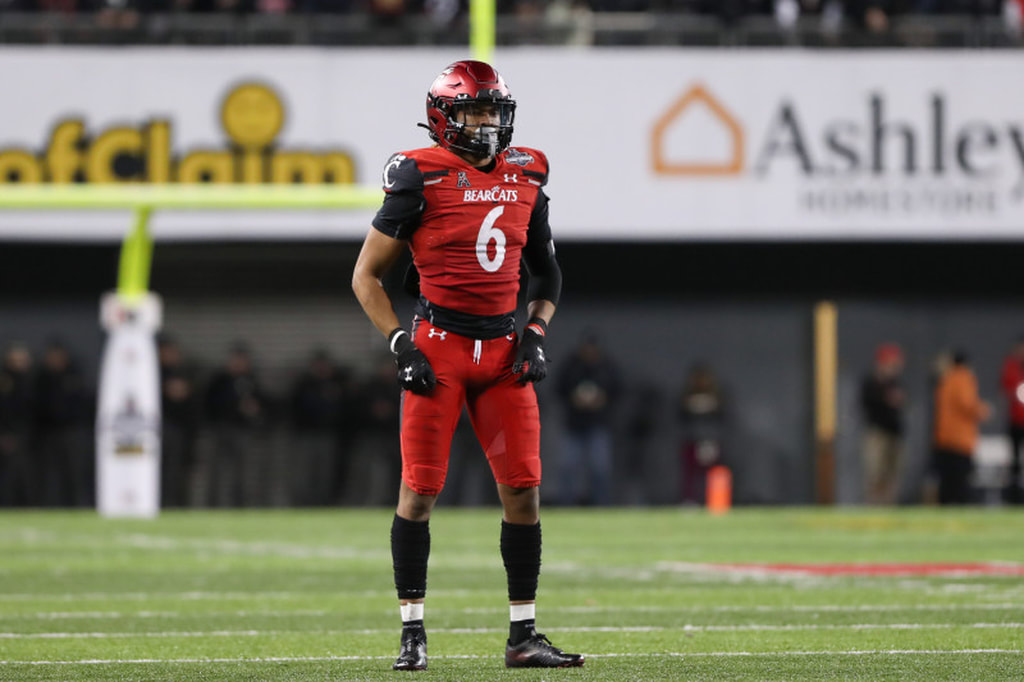 Ian Johnson/Icon Sportswire via Getty Images
The Cincinnati BearCats had one of the greatest seasons in the history of the program in 2021 and they will be represented very well in the NFL draft in 2022 with one of the fastest risers from that team being safety Bryan Cook who was the tone-setter for one of the best defenses in college football. At 6'1" and 206 lbs., Cook brings great instincts, versatility, high football IQ, and toughness to the backend of the defense. If there is a defensive player that a team can count on damn near 100% of the time being in the right spot at the right time it would be Bryan Cook. In zone coverage, he makes quick and decisive decisions on the back end of the defense and is very rarely fooled by offensive plays, look-offs, or pump fakes on defense. He has very good agility in his lower half to change direction quickly and get himself into great angles to run after throws. He has decent range when asked to play single high for his defense, which was a surprising amount in 2021, and can reliably take good angles on throws to give himself the best chance to make a play. His exceptional tackling makes him a great clean up player in coverage to ensure that there are few to no yards after the catch. In man coverage, he's shown himself to be capable of admirably coverage slot receivers in the box when asked to do so and has even shown press coverage ability as much of his time was spent playing cornerback before finding himself in Cincinnati. He's patient at the line so he doesn't bite on throws too early and can run with most receivers in the slot long enough for his defensive front to make plays. He's big enough and athletic to cover tight ends in the slot and can certainly run with them down the field. He's scrappy on contested catches and forced 9 defended passes with more than a few of them coming from him being aggressive at the catch point.  His money in the draft has been made in run defense because Bryan Cook was exceptional 2021 at stopping the run and making receivers pay coming over the middle. He can be a reliable last line of defense for a team on big plays with his powerful frame for the position and elite tackling skills. He's phenomenal at squaring up his target in the open field and surprising power in his frame to quickly make contact and bring down ball carriers of all shapes and sizes. He hits like a bull when he makes contact and can level receivers and running backs alike when he sees an opportunity to do so. He's highly versatile with an ability to play both safety positions, line up in multiple schemes and fronts, and come down and play cornerback if need be. His play and technique show a highly polished NFL safety prospect and it shows a very high football IQ and great work ethic to get better. He's a tough player whose play on the field is reminiscent of an enforcer in a biker as he sets the tone for his team with big hits and tough tackles.

While tape should always be taken into consideration over times and measurements, Cook's shoulder surgery in college prevented him from competing at the NFL combine or his pro day and their questions about his overall speed and agility at the position based on tape. His shoulder surgery will need to be examined by teams thoroughly because Bryan Cook is a Rough Ryder at the safety position who is as willing as any safety to come down hill and bring the pain to ball carriers and ensuring that he has a healthy shoulder when taking NFL players will be a concern for teams. He played on a very talented defense especially in the secondary with Ahmad Gardner and Coby Bryant often locking down their receivers, allowing Bryan Cook to play clean up or pick and choose who needs help over the top. Ball production flashed in 2021 but I worry about his consistency to come away with football on defense in the NFL. His ball skills when in a position to come down with a pick are also questionable with his small hands and hitting the catching machine will be a must to have production in this area. Zero forced fumbles in his NFL career tells me that he doesn't do enough to try and rip away the football when making tackles and developing this skill to his game is crucial for his success. His front seven at Cincinnati was also considerably talented and often rarely faced offensive plays that didn't involve the quarterback running from the pocket.

Bryan Cook is a hard player to project in the NFL because the team around him didn't give him many opportunities to really display his ability to command the back end of the defense but he's got all the flashes and glimpses of a potential starting safety in the NFL. His size, intelligence, and toughness for the position is the bedrock of most NFL safeties in today's game and teams value a player that does all the little things right on the field like Cook does. Do I think he has a phenomenal ceiling in the pros? No, but he's a player that will make a good defense better and you won't be seeing many bloopers from him in NFL games.