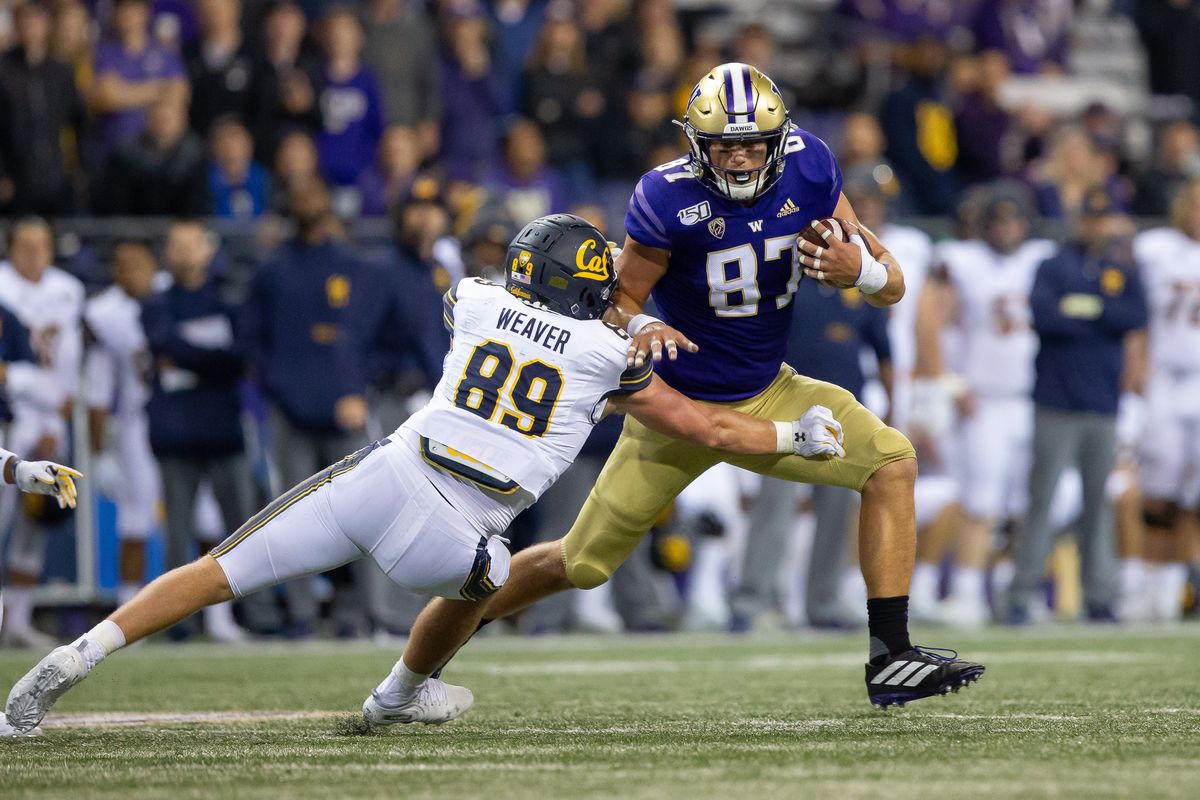 Photo by Christopher Mast-Icon Sportswire Via Getty Images
The Washington Huskies have quietly been a tight end factory for the NFL and Cade Otton is the next offensive weapon to come off the purple and gold production line. At 6'5'' and 250 lbs., Otton brings good athleticism, blocking technique, and toughness to the position. He's a good athlete at the tight end position and when he has a chance to make a big play he certainly has been able to turn on the jets and get upfield quickly for big chunks of yardage. He possesses reliable hands that's made even more impressive by his willingness to play without gloves, showing his excellent grip strength at the tight end position. He has a good catch radius and does a phenomenal job of grabbing catches in traffic. He's a crafty route-runner who has proven himself to be a mismatch against smaller linebackers or safeties when running routes over the middle. He's proven to be able to recognize holes in zone coverage and sit in them for easy yards for his quarterback. He's good at picking up yards after the catch with his size and surprising power in his frame and is very good at making his first defender miss. He possesses excellent awareness of boundary lines, first down markers, as well as the end zone and is very good at turning up field and bullying his way the line to gain or jolting out of bounds to stop the clock. He was a quarterback's best friend in college with his ability to break away as a blocker when the quarterback is under immense pressure and becoming a safety valve for more yardage. He's a very good blocker at the tight end position as he does a great job of getting his pads low when initiating contact and will jolt defenders off the line if they are not careful. He takes great angles when initiating blocks which allow him to ride guys quickly out of the rush lane or force them to make bad tackling angles on his running back. He's a very willing blocker in-line when asked to try and hold off edge rushers in the passing game or run game and he does a nice job of holding his own. He was used all over the offense for the Huskies with snaps in-line, in the slot, at X and Y receiver, fullback, and half back which is a testament to his versatility and football IQ. His work ethic and reliability are often what kept the Washington Husky offense going in 2021 and although the stats won't show it, Otton was probably the Huskies most effective and important offensive weapon.

His production in college scares me a bit because he doesn't have the excuse of being on some air raid offense with talented receivers all over the offense. His 2021 tape was underwhelming to say the least, unlike his 2020 tape which saw him absolutely run through the Utah defense like a knife through hot butter. He had zero games in 2021 that really stood out to me as a game where you could hang your hat on as a monster performance and he'll need to separate from the pack in the NFL draft during the combine and private workouts. He's not a very polished route-runner at the tight end position and learning how to properly separate at the top of his routes will be key to his success in the NFL.

Cade Otton's 2021 performance likely won't deter teams from drafting him but he'll need a very solid combine and impress teams in workouts because while his previous campaigns leave much more of an impact, the phrase "What have you done for me lately" will likely be what teams are thinking come day. He's got all the measurables and tools teams look for in a tight end and when you combine that with blocking willingness and technique and great hands, you have the makings of a very reliable offensive weapon for your quarterback. I think he starts late in 2022 or at the very latest 2023 and could turn into a quality starter towards the peak of his career.