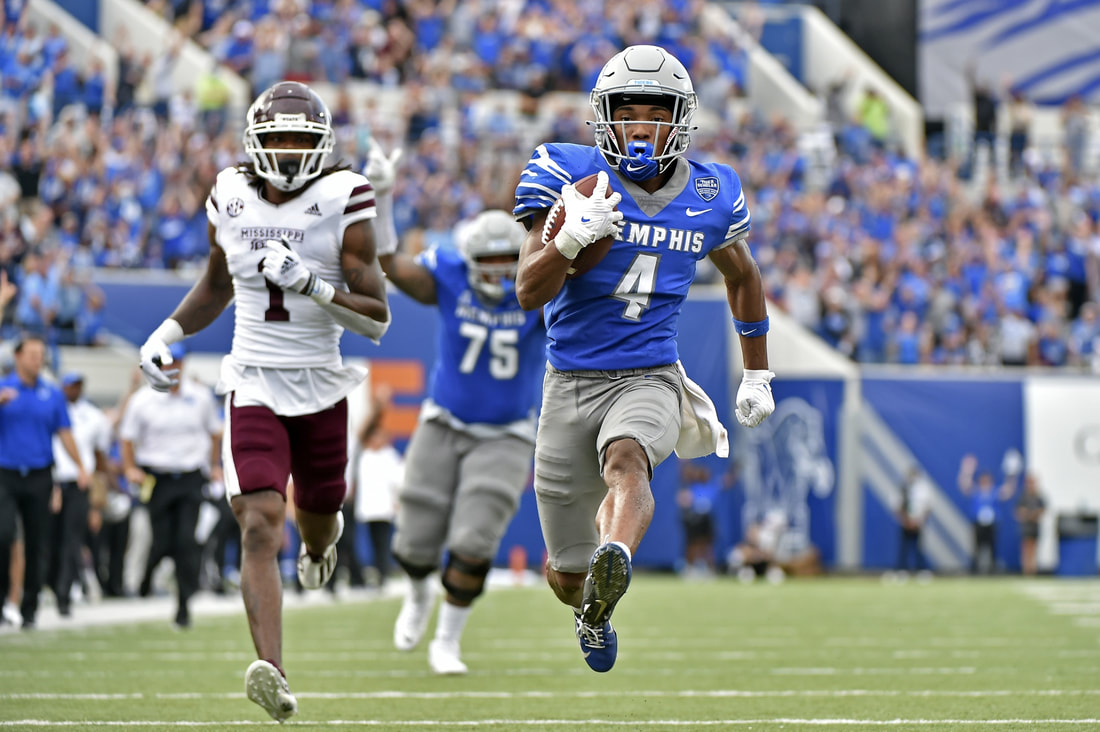 Photo by Justin Ford-USA Today Sports
One of the most electrifying receivers at the NFL combine was Memphis receiver Calvin Austin III who scorched earth in all of the drills he participated in and certainly gave scouts goosebumps about his potential as an offensive weapon. At 5'8" and 170 lbs., Calvin Austin III brings elite athleticism, playmaking ability, and versatility that can change a game any moment. Memphis has a reputation now of producing speed demons, with Tony Pollard and Antonio Gibson to name just a few, but Austin III is probably the fastest player to come out of the program with a 4.32 40 yard dash at the NFL combine and he certainly has shown that speed in games. His get-off at the line of scrimmage is instantaneous and if defenses are courageous enough to put a cover on him in off coverage, they better hope he's not going deep with his ability to burn defenders at will. He's as agile and quick as humanly possible and when it comes to disguising his routes early in their progression he's proven to be one of the best in college football. His footwork in his routes is fluid and nuanced and clearly shows a receiver that works on his craft to get the best out of his game. He has a good sized route tree for a receiver of his size and does an incredible job of knowing when to break off at the top and get open quickly. He's extremely sudden and quick in his short routes that often have left him with tremendous room to catch and run and has been quite frequently used on dump off plays. Against zone coverage, he knows how to find gaps and openings in the defense and has proven to be very good at sitting in his hole and coming down with passes. He's extremely difficult to cover in zone with his stop-start quickness that can be nearly impossible to match up with and if a team slot corner doesn't have the necessary athleticism to keep up, Austin III is fully capable of being open constantly. On deep routes, there isn't a more dangerous receiver in the draft to deal with as his speed and explosiveness has consistently left cornerbacks burnt to a crisp in coverage. His ability to scare cornerbacks with his ability to burn deep has often led to quite a bit of success on short and intermediate throws but if he catches a cornerback for just a second on a Sluggo route he's quite often made house calls for his team. He tracks the ball exceptionally well and his movement is so fluid that he's shown little issue changing gears mid throw to give himself a better chance to come down with the pass. He has excellent hands that at 9 1/4 are bigger than you would expect for a receiver his size and he's shown that he can catch passes outside of his frame. Calvin Austin II can be one of the most elusive players on the field when he has some room to make magic happen and has made fools of many cornerbacks and safeties trying to get a hand on him. His versatility as a prospect is one of his most intriguing aspects of his game as Memphis used him quite a bit in the run game on sweep plays and screens and had great success at getting yards once he touched the football. You can line up Austin III anywhere on the offense and Memphis certainly did that quite often to confuse defenders and create mismatches on defense. Calvin Austin III is also one of the draft's top 3 punt returners and has taken a punt the house in each of his last two seasons, his Mississippi State return in the 4th quarter is an excellent of his ability to be deadly with the ball in his hands. Austin III's style of play and exceptional technique in his game shows a great level of football IQ and teams looking for a dynamo on offense that can take in a massive playbook shouldn't be worried about his ability to absorb the information. He's a fearless player with football in his hands and while he certainly won't try and truck defenders he's very willing to go over the middle for passes as well as run through tacklers to pick up every inch of yards he can. He's a high motor prospect that will try and make a play or die trying and teams looking for some juice on offense and special teams should have this player high on their list. Memphis is also a run-based offense that prioritizes a ground and pound style of play and most of the opportunities given to Calvin Austin III were very limited, hence his propensity to go for gold every time he touched the football.

His size will be his biggest issue heading into the NFL because he's a short receiver with a slight frame and asking him to make blocks in the secondary or power through press coverage is a bit too much. He's not going to be the favorite in most contested catches scenarios with his lacking size and muscle and has to completely rely on his speed and ability to separate from cornerbacks to make catches. Although he does an admirable job of using his catch radius to its fullest extent, he's a tiny target and if he can't separate well enough from his opposing defender he can be a tough receiver to get the ball to. Although he's proven himself to be more reward than risk on his punt returns, his confidence in his ability to make a play anytime anywhere has made him too comfortable with taking punts within 5 yards of the end zone and teams are going to have to be comfortable with him when he tries to run and gets tackled for bad field position.  He's not one to break tackles given his size and lacking muscle mass and if a defender gets a good grip on him he usually goes down easily. He struggles quite a bit with fighting through contact at the line of scrimmage and if he's up against NFL press coverage he could struggle mightily. He's not a receiver that I would trust going over the middle as the punishment from safeties could be too much to take and I would strictly categorize him as a boundary receiver with some upside in the slot. While he's certainly a fearless player, I worry about his durability in the NFL as hits from professional athletes are going to be much worse than in college football.

Calvin Austin III is more than just your run of the mill burner receiver that's only real use is on deep routes as he's shown in college football that he can be a highly reliable receiver anywhere on the field that can run the route tree and read coverages. Tempering his willingness to take risks in the field will need to happen early as he won't be getting just 6-8 targets a game in the NFL and teams will want to use him in a way that doesn't put in harms way on the defense. Calvin Austin III is a playmaking machine through and through and in the right offense, he could be a special talent for a team.