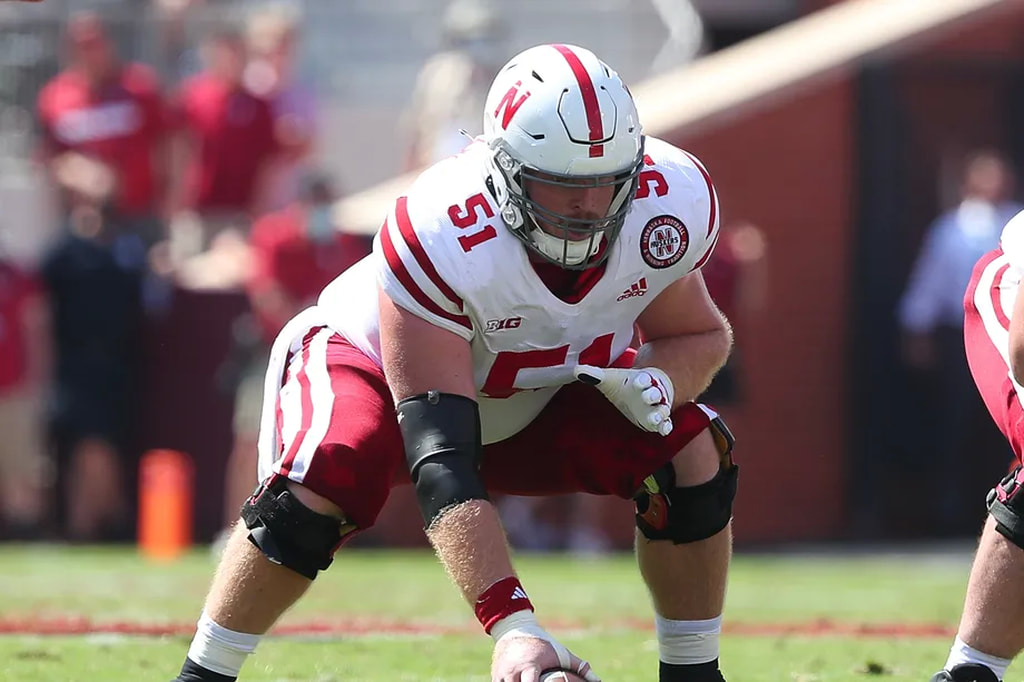 Photo by David Stacy-Icon Sportswire via Getty Images
The bedrock and keystone piece of the Nebraska of the Nebraska offensive line the last three seasons has been center Cam Jurgens and his performance at the NFL combine and pro day left quite a few teams impressed which should bode well for him during the draft. At 6'3'' and 303 lbs., Jurgens displays excellent athleticism, a raging nastiness on the field, and impressive strength. In pass protection, Jurgens has exceptional agility to make blocks in the interior of the line and doesn't get overmatched by quick defensive lineman trying to attack him with finesse. He has a power punch out of his stance that can jolt defensive lineman off the snap with ease. He has great hand strength to lock in and shut down his opposing lineman's ability to initiate counters and has surprising arm length for a play his size that allows him to keep his chest clean from defenders. He plays with very good pad level out of his stance and doesn't get out leveraged very often at the line. He's a capable hand fighter that does a good job of keeping his chest clean. He's at his best when used in the screen and quick pass game as his athleticism allows him to get into space quickly and lead a convoy for his offense. He's a violent offensive lineman in open space when he can make contact with linebackers and safeties and has seen his fair share of highlight worthy pancakes. He's a block finisher when he can leverage his opposing lineman early. In the run game, he comes off the line with violent intentions and is looking to bring the pain at first contact. He can rock opposing defensive lineman off their feet when he can catch them off guard and is a nasty finisher on his blocks when his opponent is off balance. He shows little issues reaching the second level and is looking for blood when trying to make blocks in the second level. He's been a starter on the Nebraska offensive line since his freshman season and you can see his gradual improvement in his play in each of his seasons for the Cornhuskers. He's an extremely competitive offensive lineman that won't get beat easily and will do his job or die trying for his team. Any coach can be assured that he'll do his best to get better at any role given to him.

Teams are going to want Cam Jurgens to develop more power in his lower half in the NFL because far too often Jurgens can get pushed around by defensive tackles that outweigh him and overpower him with bullrushes. He walked back into the pocket a little too much for comfort in 2021 despite his efforts to mitigate bull rushes and developing more hip flexibility could be crucial to his success. He can let his nastiness get the better of him as a blocker down field as he's prone to play well after the whistle and get potential unsportsmanlike calls and temper his rage as blocker will need to occur in the NFL. He can take poor blocking angles in the second level at times that give safeties and linebackers opportunities to cut behind him and make plays. He can play with too much impatience in his pass protection in the middle when not facing off against nose guards and has fallen victim to stunts and twists up the middle. Focuses too much at times on trying to run over his opponent rather than securing the block and can be late to disengage and make his 2nd block. He can be late to react to blitzers coming at him and needs to do a better job of recognizing blitzers pre-snap. He needs more leg drive as a run blocker because too often against bigger lineman he struggles to drive them off the ball and push them out of the hole. I didn't see a great deal of making calls at the line of scrimmage and teams will need to do their due diligence when drafting to ensure that he's capable of such responsibilities

Cam Jurgens is a nasty and athletic center prospect that needs to polish his game bit and show teams that he can keep his rage under control on the field because while it's admirable to make defenders pay on every snap, he's too often trying too hard to make the most out of every one of his plays at the expense of his team. He's got the physical traits to make an impact on a roster and if he can impress in training camp, I think he could be a surprise starter at the beginning of the 2022 season depending on who drafts him.