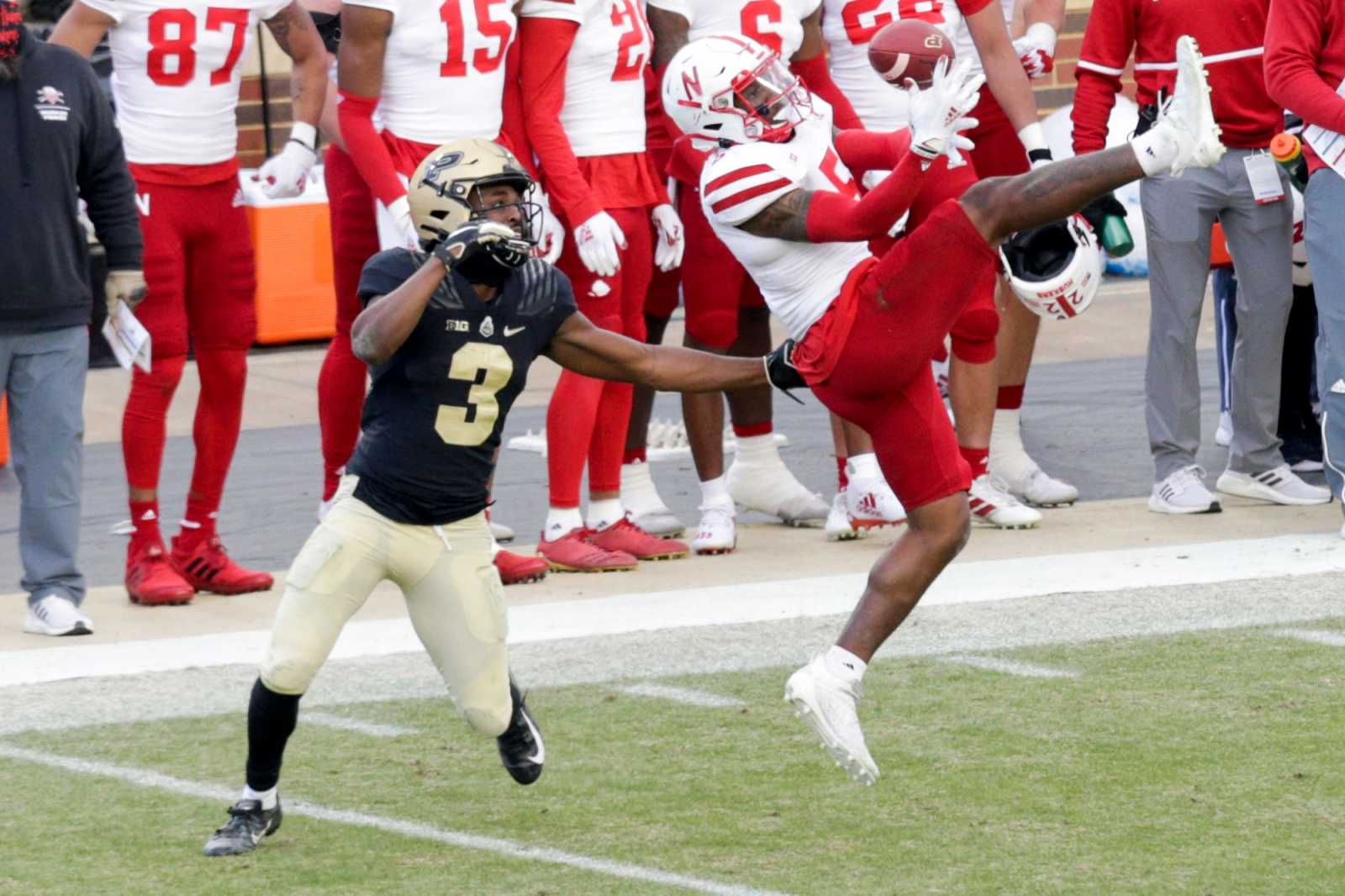 Photo by Nikos Frazier-Journal & Courier
If there was a cornerback in college football that players did not want to get hit by it would be Nebraska's Cam Taylor-Britt whose combine performance was just the tip of the iceberg when it comes to his potential. At 5'11'' and 197 lbs., Taylor-Britt brings excellent athleticism, immense physicality, and a great knack for causing turnovers. Cam Taylor-Britt is one of the better defensive playmakers in college football and NFL teams are certainly looking at him as a prospect with some untapped potential. In man coverage, he displays the athleticism to follow receivers around the field and rarely has found himself losing a foot race. He's good at competing for the football and if he gets beat he possesses excellent recovery speed to get back into the play. In zone coverage, he displays excellent explosiveness and range from the cornerback position and proved himself to be a dangerous player to challenge in this coverage. He can flow very well in his area and when he spots the quarterback's target, he's certainly capable of disrupting the pass effectively. He's great attacking the football at the catch point in zone coverage and his speed allows him to get to an advantageous position quickly. His former time spent playing quarterback has given him good insight into how quarterbacks read defenses and make decisions and it made it difficult for quarterbacks to catch him off guard. He's a highly competitive player in zone coverage who doesn't get bullied out of position by tight ends when asked to play in the slot and will make life as difficult as possible on the outside for more physically gifted receivers. He's rarely far from where the ball is being thrown and his aggressiveness at the catch point has often led to dropped balls and interceptions. In press coverage, he plays with excellent aggression at the line of scrimmage and his scrappy style of play has often led to positive plays for his defense. His aggressiveness throughout the route is difficult for receivers of all shapes and sizes to deal with and it helped him a great deal in the red zone when receivers with size and length are at the most advantageous position. His ball skills are tremendous with plenty of interceptions and plays that look impossible. He certainly has plenty of explosiveness in his lower half with his ability to reach the catch point on contested catches no matter how high and has shown to be an extremely difficult player to keep away from the football. In run defense, he's violent and vicious a tackler as you'll find in a cornerback and should be a dangerous player on special teams. He's fearless when attacking the line of scrimmage in run defense and doesn't shy away from bigger ball carriers. He's a great blitzer even for  cornerback as he knows how to weave through the trenches and come out clean into the backfield. He does a nice job of attacking the football when making tackles and had 4 forced fumbles in 2019. He's been very successful making plays in the backfield for his when asked to blitz and he knows how to disguise himself a bit before attacking the line. He's an all-gas-no-brakes kind of player and teams won't have to worry about him not giving his all. He's extremely tough and competitive and should be a coach's favorite once he gets onto the field.

Cam Taylor-Britt converted from quarterback to cornerback when he joined the Cornhuskers so he's still a bit raw as a cornerback prospect and it's not hard to see his shortcomings on tape. In man coverage I would consider him to be quite the gambler as he's too often biting on routes giving his man an opportunity to burn him deep. His back pedal is certainly a work in progress and it costs him in the fluidity and agility department of man coverage. He's been burned by shiftier receivers that can take advantage of his lacking quickness and it has often forced him into some ugly mishaps on the field. He can often get caught guessing at the top of routes which often leaves him susceptible to getting burned and he's often found himself playing cleanup more often than making a play for the football. While he has excellent ball skills, he struggles to high point passes when running downfield with receivers and it has cost him chances at coming down with interceptions and even has given his opposing receiver chances at receptions. His physical style of play, while admirable, could be an issue down the road when it comes to his longevity because he lacks the size to consistently deliver the punishment he does from the cornerback position. He's too often going for the big hit as a tackler rather than wrapping up and bringing down ball carriers efficiently.

Cam Taylor-Britt's tape shows a player that will make a play or die trying and that level of motor is always appreciated by NFL teams. He needs a great deal of coaching to be a consistent player in his NFL and especially in his man coverage skills but with time and reps at his craft he certainly can realize his potential. I think he's a rotational cornerback early in his career that could move into a starting role once he gets a season or two under his belt.