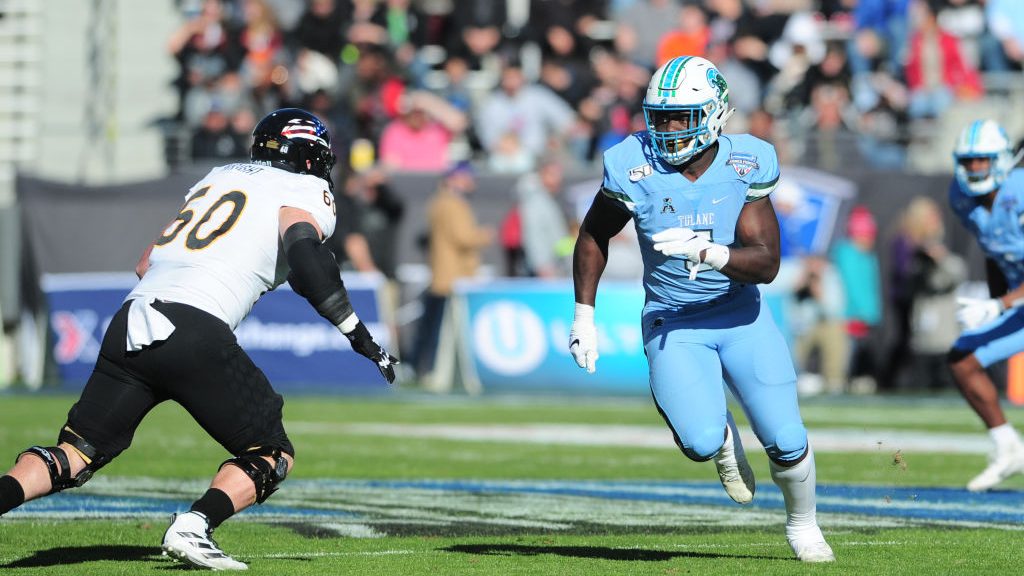 The Tulane Green Wave featured one of the best pass rush tandems in the AAC with Cameron Sample and Patrick Johnson wreaking havoc on offenses with Sample being a major chess piece for defense. At 6'3" and 275 lbs., Sample brings excellent size and power to the edge rusher position. He's as powerful as a 275 lbs. can be and it shows up consistently at the point of attack. He has an explosive first of the line and brings plenty of power at the point of attack. He's a very violent hand fighter whose quick swipe and club opponents hands out from his chest. He utilizes a very powerful push and pull move as well as a dip and rip move to get by opponents. He's malicious with his punch and his heavy hands make quick work of weaker offensive lineman. He has tremendously strong hands that are extremely powerful and breaking his grip when he's latched on is a tough task for any offensive lineman. He's a great bull rusher when he gets the leverage to drive lineman off the ball and rarely finds himself getting pushed off the line. He's at his best in run defense where his compact muscular frame allows him to plant his feet on the edge, stack offensive lineman, and tackle running backs as they run by. He's as versatile as a defensive lineman can be as Tulane used him inside, outside, and occasionally as a stand up linebacker and he was effective at all three positions. He fights hard through double teams and doesn't stop till after the whistle. He's a great tackler who is quick to bring down ball carriers and doesn't find himself. He has a non stop motor and plays with outstanding effort.

He has average length for defensive lineman and can find himself in an uphill battle against offensive tackles with longer arms. He's not very flexible as a pass rusher and is not likely to bend the edge in the NFL. He's quicker than he is fast and isn't going to run down running backs without getting a good angle on them. He doesn't try to go after the football when rushing the passer and rarely attempts to strip the ball from running backs. When his initial move fails he appears to have no back up plan to rush the passer and will need to develop a counter rush game if he wants to succeed. He wasn't as productive on the stat sheet which is concerning considering Patrick Johnson opposite of him was 0.5 sacks away from first place in college football. He's a bit of a tweener with his build and I don't think he's going to find much success outside of playing in a 4-3 defense.

Cameron Sample is a powerhouse of a defensive end prospect whose size and ability make him a 3-down player on a football team. If he can develop his game further and show more ability as a pass rusher, he could be a problem for NFL offenses. At this point he's a reliable run defender that can play the 3-tech on passing downs.