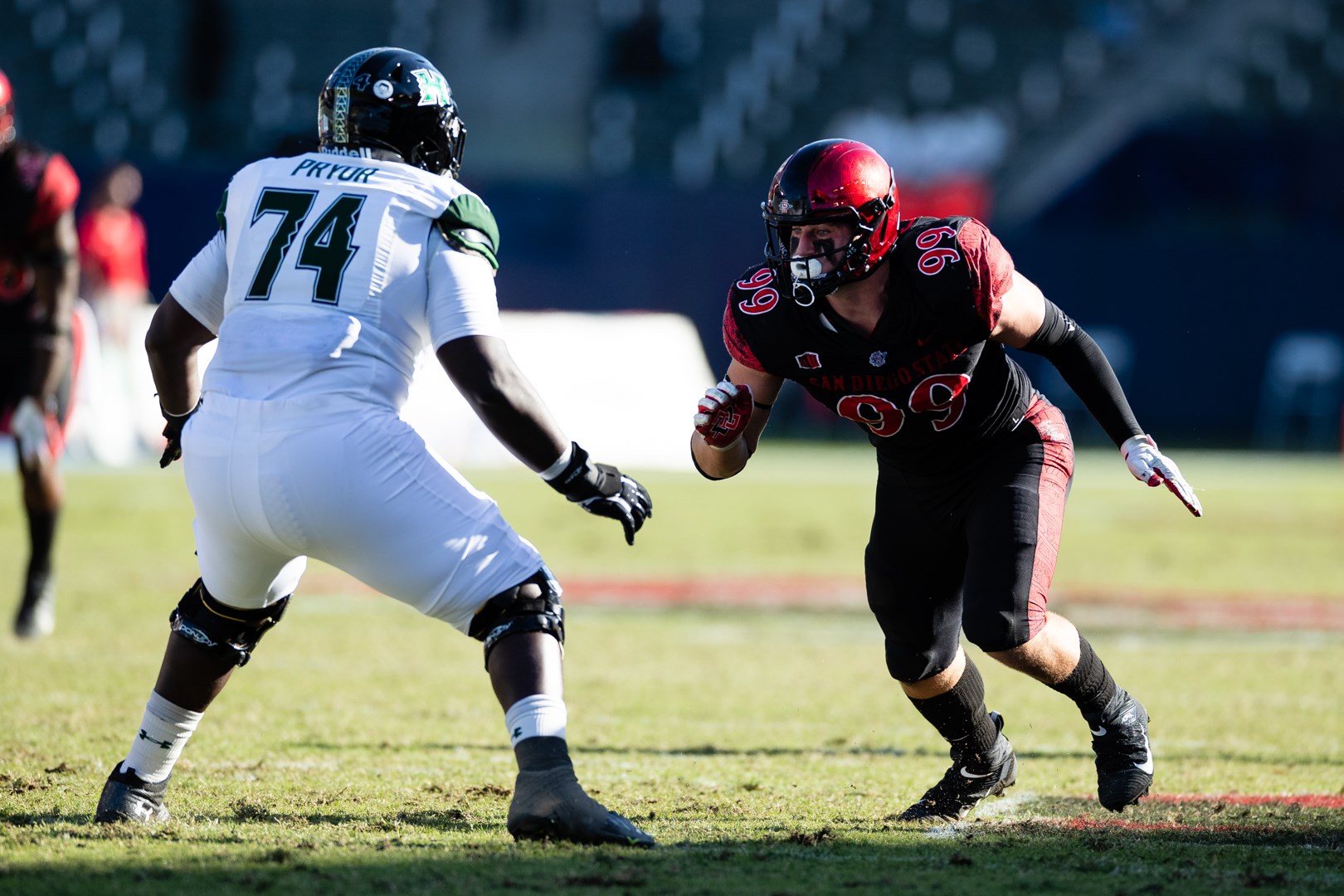 Photo by SDSU Athletics
San Diego State once in blue-moon will spit out a high profile draft prospect with major upside and Cameron Thomas for Aztecs is that blue-moon occurrence. At 6'5" and 270 lbs., Thomas brings phenomenal size, length, and athleticism as well as excellent power and technique to the position. Cameron Thomas time playing in the interior defensive line for the Aztecs gave rare nastiness on the edge which made a terrifying edge defender and Mountain-West offenses clearly circled him in practice and made stopping him priority #1. As a pass rusher off the edge, Thomas comes off the ball with a dynamite first step and times the snap count as good as anybody in college football. He's exceptional at keeping his pads low off the ball and consistently attains excellent leverage. He has a very powerful punch from his years in the interior and can upend offensive tackles if he gets into their chest pads quickly. He possesses a highly polished array of pass rush moves that he not only uses with great efficiency but can string them together which is what made him so hard to game plan against. He's favorite based on his game tape is his snatch and swim move on the edge and with his exceptional power in his torso he can often toss his opposing offensive lineman to the turf. He has a great push pull move off the edge that allows him to take control quickly and disengage at will. He has very long arms as an edge defender and keeping offensive lineman getting a grip on him is what has helped him consistently create pressure and force errant throws. He has shocking elusiveness and agility for a man his size and his ability stutter step and create separation from the offensive tackle early is quite remarkable. He has good flexibility in his frame and has shown the ability bend the edge on some offensive lineman in college football. His time in the interior of the defensive line also gave him a very good bull rush that's both technically sound and highly effective with his natural power in his frame and great leg drive. He has a good counter spin move when his initial rush move fails and has made a lot of second effort plays for the Aztecs defense. He's at his best when he plays the run because he's a load to block off the edge when digs his feet. He holds his ground very well when offensive lineman try and drive him off the ball and has enough power to stack and shed on the edge with ease. He can hold up through double teams when he can get low and extend his arms and has enough power and tenacity to rip through them when he locks onto the ball carrier. He's a great tackler with long arms and powerful grip allows him to drag down ball carriers and occasionally bring them down with only one-arm. He's not fooled by read-options or trick plays often and when he cuts inside to collapse rush lanes, he does it with malicious intent. He's a phenomenal goal line player with multiple short yardage stops  He's as nasty an edge rusher as you'll find in the draft so much so that San Diego State lined him up both inside and outside quite frequently, allowing him to create mismatches in the offensive line and wreak havoc, giving him excellent versatility. His production on the stat sheet was remarkably consistent which shows that he comes to games well prepared and studied his opponents hard which is a testament to his football IQ. He's a high motor defensive lineman that clearly plays with extreme competitive spirit on the field.

He plays for San Diego State which is in the Mountain-West conference which doesn't play many Power 5 schools and while it doesn't mean he can't make it in the NFL, lack of snaps and playing time against potential NFL talent will be held against him. He doesn't attack the football enough when making tackles, both when sacking the quarterback or bringing down running backs, and learning how to punch or strip the football will benefit his career tremendously. His pad level can be inconsistent at times with their ability to rise up through his rush keeping his pads low through the process of getting up field is key to his success in the NFL. He's strictly a hand in the dirt pass rusher in my opinion and drafting as a 3-4 outside pass rusher could limit his ability as a defender. He can struggle with his change of direction, especially in the open field, and further pushes the argument that his home in the NFL will be in the trenches rather than outside.

Cameron Thomas hasn't seen his draft stock rocket up boards but it's climbing slowly but surely and if he has good workouts as well as a solid combine, he could hear his name called in Day 1. If he was on a Power 5 schools defensive line with his production, I have no doubt in my mind he'd be mentioned as a Top 20 pick. He's the complete package as  pass rusher and the flaws in his game are completely out of his control as a prospect. Teams that need a Day 2 plug-n-play defensive lineman need to have him on their radar because he has Day 1 starter potential with his high floor and he could develop into a potential quality defensive end early in his career.