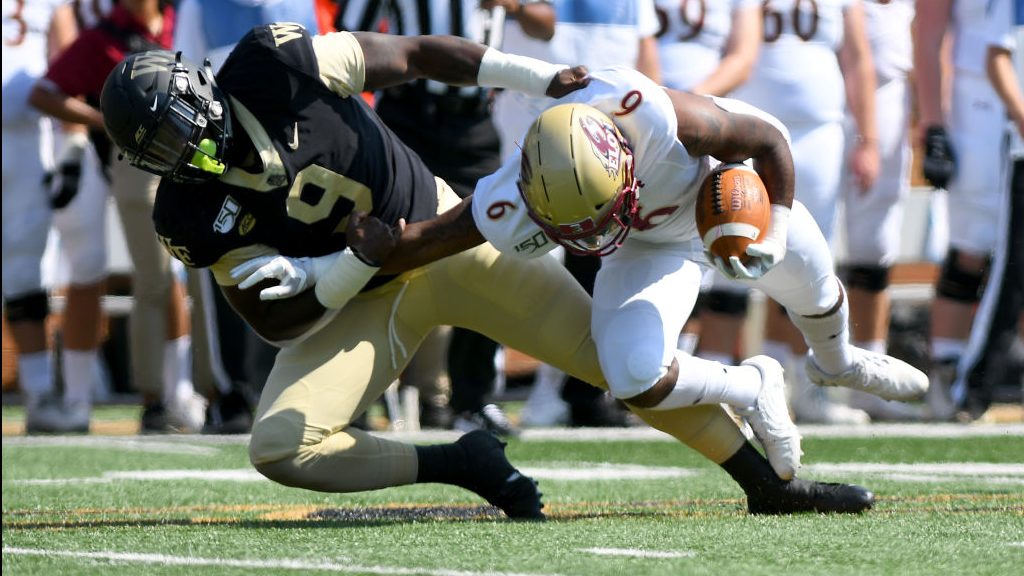 Carlos "Boogie" Basham really caught fire last season playing for the Demon Deacons and will be a guy to keep an eye on next season as a sleeper Day 1 pick. He's got elite level size at 6'5" and 275 lbs. with good length and athleticism. He's got long arms that bring a lot of power when initiating contact and shedding blocks. He's got a good explosion at the snap of the ball and great quickness to put moves on offensive tackles and get to the quarterback. He has elite level hand quickness to swipe and swim offensive tackles in the blink of an eye. When he gets going as a defensive lineman, he's a very hard player to stop and he can dominate an offense single-handedly if he gets an edge. He's got good instincts in run defense and can really wreck a running game if he figures out an offensive tackle. He has enough athleticism, in my opinion, to be a stand-up pass rusher in the NFL and I wouldn't be shocked if Wake Forest experiments with him as a 3-4 linebacker next season. He has good pursuit and closing speed for a man of his size and very good lateral agility to effortlessly move down the line of scrimmage. He has a very good swim move and decent rip move and should translate well in the pros. Plays with a white-hot motor. He's not easily pushed off the line of scrimmage in run defense and has the capability of being a 3-down defensive lineman in the NFL. He was a menace in 2020 at taking the football away from ball carriers, either by punching the ball or stripping it, and a skill like that will get you a very long way in the NFL.

Consistency is his biggest issue with most of his production coming from only a couple games rather than continual production. He comes out of his stance too high at times and it can affect his ability to get free from tackles. His bull rush needs work which could also be attributed to his high posture at the snap of the ball. He's a tweener lineman with his size which could dissuade teams from drafting him due to the scarcity of guys playing with size and finding success. He's a little thick around his waist but some time in the weight room should clear that up.

Carlos Basham Jr. was a monster in 2020 despite only playing in 6 games before opting out and any team in need of a pass rushing lineman should have him very high on their board. His technique, competitive nature, and versatility will make him a difficult defender to play against if put in the right scheme. He's got a higher floor than most of the defensive lineman in this draft and will be an early contributor in the 2021 season.