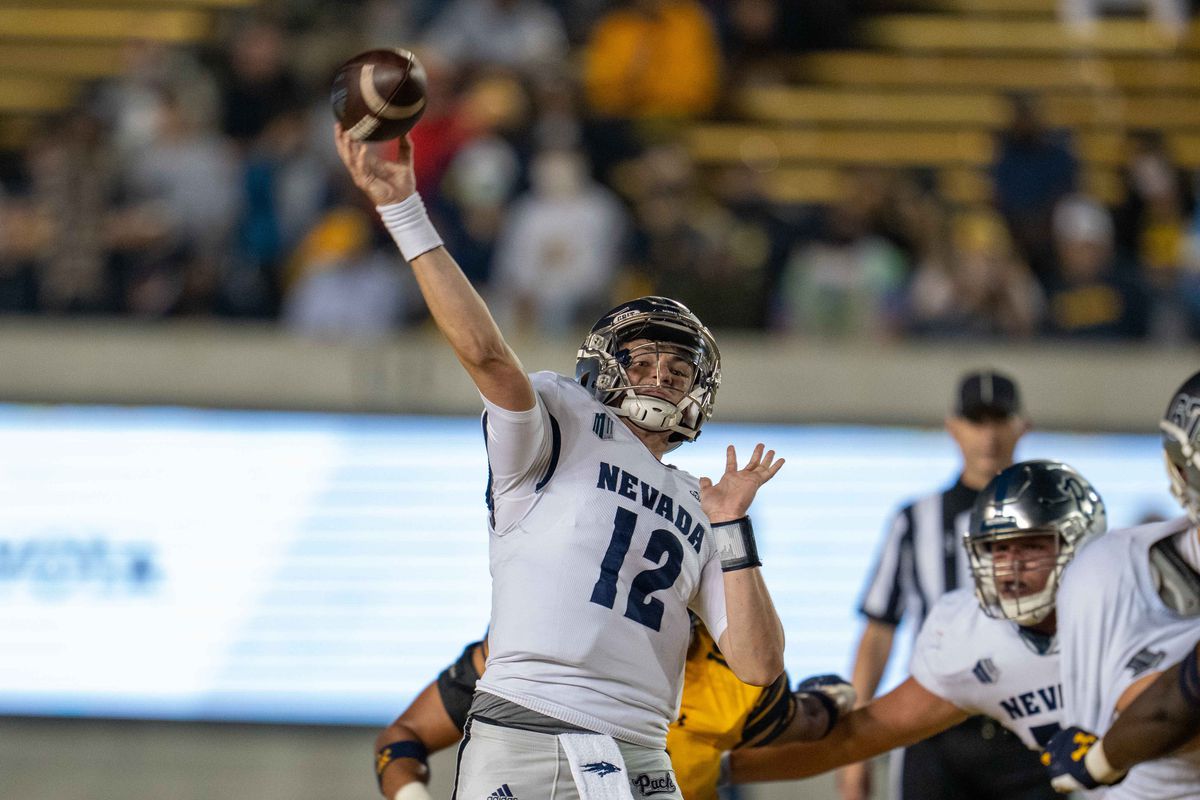 Photo by Neville E. Guard-USA Today Sports
Carson Strong, out of all the quarterbacks in the NFL, is probably the prototypical of the bunch in this draft and is one of the few quarterbacks in this draft that has a majority of his production come from throws inside the pocket and his production playing Nevada in their pass heavy spread offense is very impressive. At 6'4" and 215 lbs., Strong has a howitzer for an arm, great throwing mechanics, and a very impressive decision maker. As a Pocket passer, Carson Strong has all the tools and intangibles that teams look for in a traditional drop back quarterback with his size, vision, and big arm. Carson Strong does a nice job of getting rid of the football when the pressure starts to get to him and there was a noticeable drop in his dangerous throws because of this. He's one of the few quarterbacks in this draft that has been tasked with reading defenses pre-snap and making adjustments at the line. He's good at tricking safeties with his movement and his eyes and has had great success looking off coverages and delivering the ball to his receiver. He has good throwing mechanics that he's clearly worked hard at polishing in his career and thus he throws accurate footballs with consistency. He does a great job of growing through his progressions and doesn't look at his intended at the start of the play. He spreads the football around quite a bit which helps keep his fellow receivers happy and keeps the defense honest and confused. He has a cannon for an arm, probably the best arm in the draft, and he's able to throw lasers at all three levels of the field. He's very good at going to his check down receiver or tight end when he gets pressured and really improved in 2021 when it came to avoiding sacks. His accuracy is at it's best when throwing downfield as he can hit his receiver in stride even if the window of opportunity doesn't warrant a throw in their direction. He throws passes to wear receivers are going to be rather than where they are and that's allowed his receivers to make plays after the catch often with a wide open field. He's a highly intelligent football player who will absorb the playbook very well and could be a quick learner in the film room. He's a great leader by all accounts and when he commits a mistake on the field he owns and rebounds tremendously.

Carson Strong isn't going to be impressing coaches at the combine with his athleticism because he's certainly lacking as a mobile quarterback. He's not one to runway from defenders and when blitzers get through his line before he sees them, it's usually a sack. His ability to throw on the run is questionable given his lacking athleticism and has been caught from behind quickly by defenders if he has to escape the pocket. The air raid offense is an offense that quarterbacks who played in it have a hard time developing into the NFL because it's an offense that's highly predicated on the offensive talent around the quarterback and his ability to simply pick matchups in the secondary. The Mountain West conference isn't a conference that features crazy talented defenses or defensive backs that could have given Strong a run for his money and when he gets into the NFL I do worry about the level of talent and his ability to adapt. He can have a bit of a windup when he throws the football and getting to slightly adjust his throwing motion will be crucial. He has highly impressive stats but with his offense being an Air Raid system that often means that his stats are a bit inflated. He can get a little lackadaisical in the pocket when he's not under pressure or when he gets too comfortable and this can cause some inaccuracy issues or a drop in focus.  I would like Carson Strong to put on much more weight in his frame to the tune of about  15-20+ lbs. because he's not fast enough to run from anybody in the NFL and he's likely going to take some punishment from defenders and adding more mass to his frame would help his longevity.

Carson Strong is one of the few classic shotgun or drop back quarterbacks in this draft class and is easily the most traditional of all the quarterbacks available. HIs size, arm strength, and mental makeup for the position is what NFL teams are always looking for and I do believe he could be a surprise pick in the NFL draft towards the bottom of the 1st round. Yes, mobility in a quarterback is the hottest stock going in today's NFL but getting the core aspect of the game down which is throwing the football is still it's most important skill. I think that Strong would benefit from developing behind a QB on his way out, Tom Brady or maybe Russell Wilson, and eventually taking over after they're gone. His arm talent is hard to find in the NFL draft and that's likely where most of his value will come from.