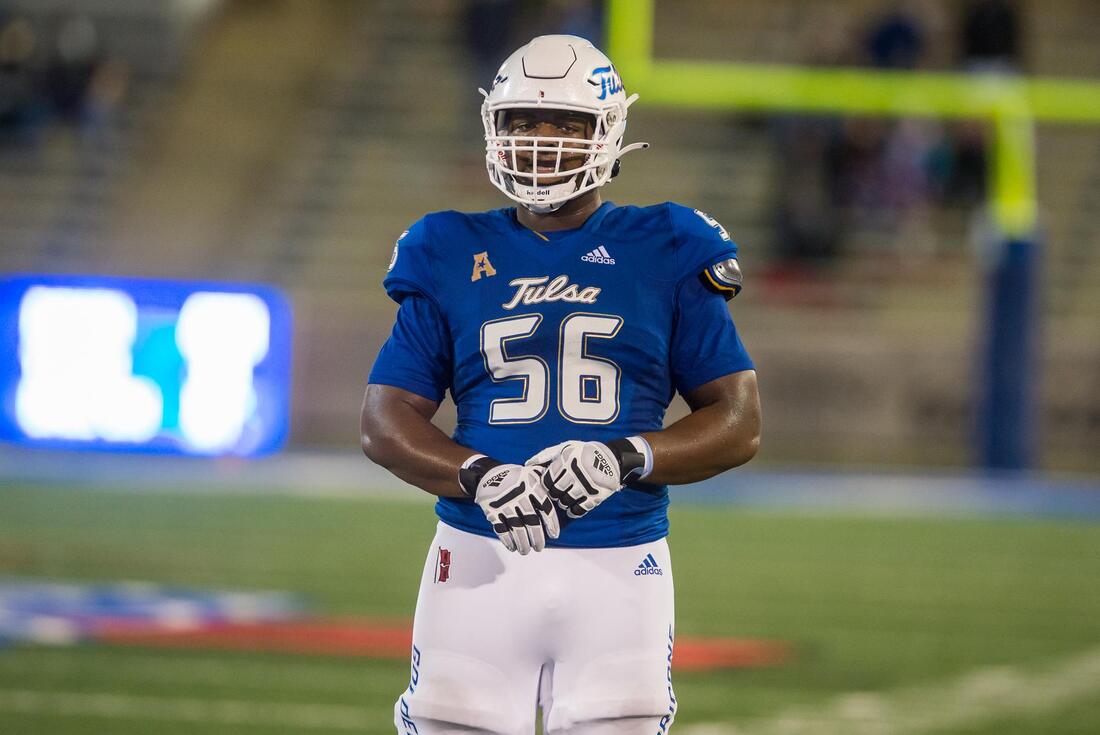 Photo by Brett Rojo-Tulsa Athletics
One of the fastest risers in this year's draft late in the offseason, Tyler Smith has earned immense praise from scouts all over the league and could be a surprise Day 1 selection if his hype train continues its incline. At 6'5'' and 327 lbs., Tyler Smith brings exceptional athleticism, tremendous strength, and a nasty disposition in all phases of his game. In pass protection, he possesses all the physical traits that you would want in a blindside left tackle prospect with a big and wide frame and long arms to match with it. He's a great athlete for his size and edge rushers that try to win with pure speed off the edge have struggled to beat him. His kick slide out of his stance is explosive and tough to beat and often has led to Smith being in an advantageous position when riding defensive ends out of the pocket. When  his punch lands well, it can be a devastating experience for its recipient, often turning into a pancake or at the very least getting knocked off their kilter a bit in the rush. He has a grip like an old lobster when gets his hands on his defender and never seems to have his grip broken. He will pummel his edge rusher from start to finish and often after the whistle is blown and you can be sure that his defender knows he's in for a long day again. In the run game, Smith is possibly one of the nastiest and most vicious blockers available in the draft. He comes off the line of scrimmage with great explosiveness and very bad intentions and has shown little issues with engaging defensive lineman of all shapes and sizes. He brings the pain at the point of contact and if his target either isn't paying attention or is a weaker opponent, it can be game over very quickly for them. He has plenty of leg drive when engaging his defender and has no problem muscling them off the line and clearing a path for his running back. He's unfazed by power on most of his run blocks because he plays with such a vicious mean streak and his constant brutal style of play wears down the defensive line throughout the game. He has shown no issues making blocks down the line on runs opposite of him and can maul big defensive lineman when he has a runway. He attacks the second level with his maliciousness as he looks to pummel linebackers and safeties and he possesses more than enough quickness and speed to ensure that he isn't easily eluded. He hits like a freight train when he makes contact with defenders in the open field and can be a scary player to run behind as a pulling tackle. He's a highly competitive player that will fight scratch and claw throughout the entirety of a game and never takes plays off. If you're a team in need of some attitude on your offensive line, then Tyler Smith should be near the top of your board because he played enforcer for his team when defenders got to comfortable starting trouble.

His nastiness is both a gift and a curse because on occasion Smith can get too aggressive trying to man handle defenders and get called for holding. He's a raw prospect in this draft with some deficiencies in both the run and passing game that will need to be addressed to maximize his immense potential. He has a tendency to play very high in his stance in pass protection which gives his opposing edge rusher an advantage when establishing leverage. He's too often punching defensive lineman outside their frames when initiating contact, often leaving his chest wide open for defenders to lock on and potentially bull rush him. His footwork is slower than expected for a offensive tackle of his athletic caliber and it's more likely due to technique rather than a lack of agility. His hand placement is disastrous when engaging edge rushers and too often gives his opposing lineman opportunities to swipe away his grip and beat him quickly. Timing his strikes has also been an issue for him and his immense power in his upper body can get mitigated by early launches at the defender. He has struggled against speed rushers that can beat with quickness and has had a tendency to leave his inside gap open for them to cut through. When run blocking, he can play with higher pads than you would like and short defensive tackles have given him trouble in the past. His nastiness as a blocker could get him into potential trouble after the whistle as he's not immune to the occasional extracurricular “smactivities” on defenders that he's pummeled into the ground. Not a great deal of versatility as a offensive lineman with his only experience in college football at offensive tackle and even though I think he can play and potentially thrive at the guard spot, keeping him as an offensive tackle could yield better results for his future.

Tyler Smith may need to start his career at guard or right tackle before transitioning to the blindside blocker role but he has everything a team could want in a left tackle prospect currently. His raw technique and over-the-top aggressiveness won't be as much of an issue at guard but his future will need to be at tackle to justify a top 50 pick. If he can develop in his game and polish his technique, he could be a special talent on the offensive line.