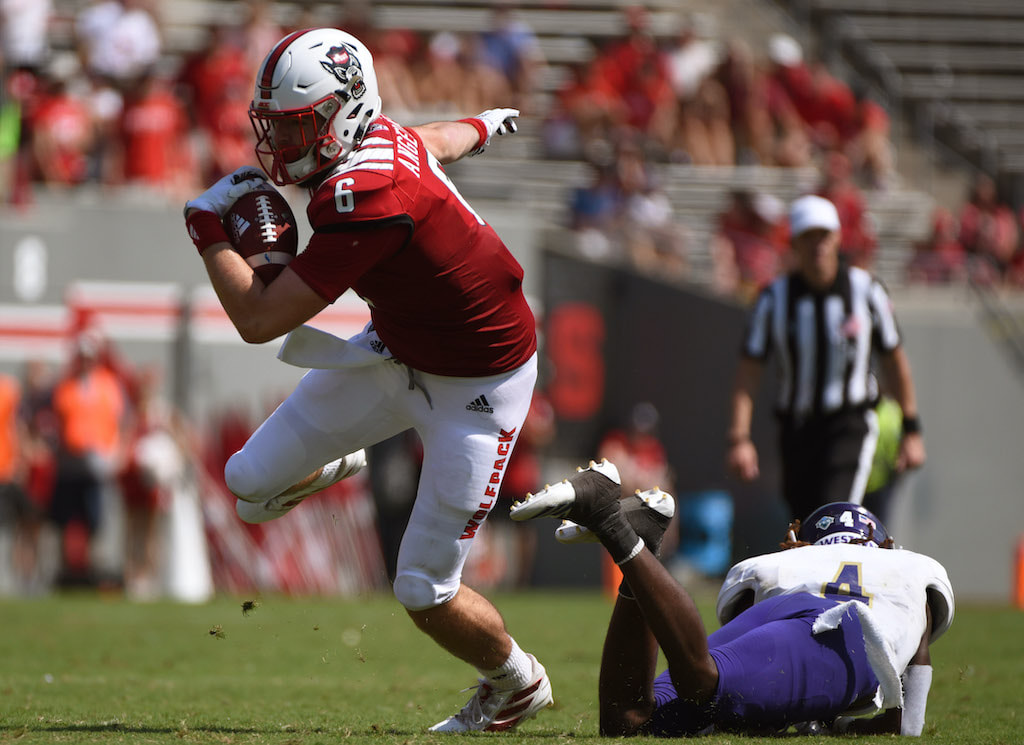 Coming as probably the tallest offensive weapon in the draft, Cary Angeline is sure to impress scouts with both his size and potential at the tight end position. At 6'7" and 250 lbs., Cary Angeline brings great size and surprising athletic ability to a position that thrives off of both traits. He's a massive target on the field and will be hard to miss for quarterbacks down field. He has a tremendous catch radius with his size and wingspan and can develop into one of those rare tight ends that quarterbacks can simply throw a ball up in his direction and he'll come down with it. He has very good hands that pluck footballs out of the air and rarely uses his body to make the catch. He's a surprisingly fluid route-runner for his size and understands how to sink his hips and change direction and create tremendous separation. He's a very good possession receiver on the sidelines where he does an excellent job of keeping his feet in bounds. He's great in the red zone where his size allows to act as an NBA center and box out his defender to make the grab. Willing to extend his body to make a play but rarely has had to with his size. He's a willing blocker and very competitive player who will grind on every snap. He's a versatile weapon and was used all over the NC State offense.

While he's fast and fluid for his size, he's not much of a threat with the ball in his hands and rarely has found himself creating more yards after the catch. He's a non factor in the open field and lacks any evasive maneuvers. He's not a very technical blocker as he mostly relies on his size and athleticism to make blocks. He doesn't have much of a route-tree and doesn't possess very fluid route-running. Has trouble attacking zone coverage and attacking the open zones in a defense. He's always tackled by the first guy he meets on the field and doesn't do enough to fight for extra yards.

I think Cary Angeline is a project and a boom-or-bust prospect among tight ends because there are certainly moments where looks like the second coming of Jimmy Graham and then there are moments where he looks undraftable. If he can develop further and find his way into the perfect system, he could become the steal of the draft.