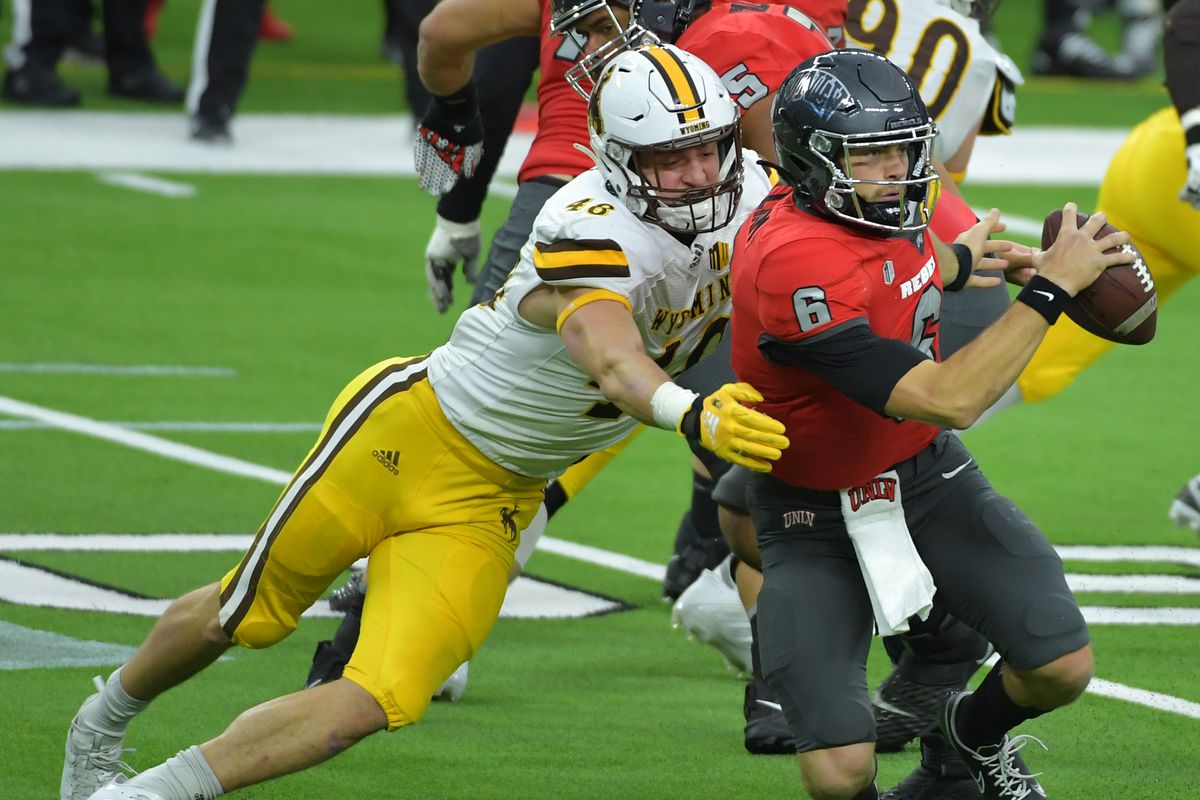 Photo by Stephen R. Sylvanie-USA Today Sports
Wyoming football in the Mountain West Conference every once in a while spits up an exciting prospect and Chad Muma certainly fits the mold one coming out of college. At 6'3'' and 245 lbs., the converted safety brings excellent size, athleticism, and leadership skills. Chad Muma for two seasons has been one of the best defensive players in the Mountain West conference and certainly has looked like a man among boys for Wyoming. He has exceptional speed and agility for a linebacker his size with near sideline-to-sideline speed and a play is never out of his range. He has a muscular build that has ample power to wrap and bring down bigger ball carriers like power back and tight ends with ease. He's highly instinctual in all facets of the linebacker position and plays with a very high football IQ. In run defense, he's very good at reading the offense's run play and meeting running backs in the hole. He does a great job of attacking the line of scrimmage when he recognizes runs seen in film and was very successful at squeezing or shooting through gaps in the line and making plays in the backfield. He times his blitzes very well and has come into an opponent's backfield sometimes without much resistance. He's as sure-handed a tackler as you'll find in the NFL draft with long arms, muscular frame, and great power to go with it and never seems to either miss a tackle or get dragged for yardage. He takes excellent angles when giving chase and rarely has found himself on the ground empty handed. He's got a great pop behind his pads when he makes contact with ball carriers and can leave a new dent in your helmet if he has a clean shot. He's not fooled by misdirection plays or read-options at the linebacker spot which has helped him stall offensive plays and allowed him to play clean up crew. He tackles guys low to get maximum force when he hits as well as avoid getting broken off ball carriers. In coverage is where he shined in 2021 where his safety background and new linebacker position blended very well to make him the best coverage linebacker in the Mountain West conference as well as one of the best in college football. He's extremely vigilant when it comes to route recognition early in a passing play and never seems to be out of position in both man and zone coverage. His long arms and tall stature allowed him to cover tight ends effectively down the field and made him a difficult defender to box out in zone. He also does a nice job of using his size to make throws that are difficult to make as quarterbacks often risk batted passes or interceptions. Speaking of which, Muma has some of the best hands you can find among defenders because he can get two hands on the ball, he'll come down with it and if he has room to run in front of him he's very capable of turning a turnover into a house call. He's a high IQ football player just based on his conversion from safety to linebacker so successfully and with such little issue and it's also seen with his ability to quarterback a defense as he's responsible for making adjustments with his defensive lineman as well as reorganizing the coverages on defense. He's the unquestioned leader of the Wyoming team, let alone defense, and when adversity strikes the Cowboys in a game the team turns to him to help turn things around. He's a competitive player with a high motor and his work ethic in the film room, weight room, classroom, as well as on and off the field should really impress scouts during the draft process.

Chad Muma played against mediocre competition in college in the Mountain West Conference and while he's been a monster on the stat sheet in said conference his lack of competition against top tier college football talent will likely hurt him in the draft. Zero forced fumbles in his career is a bit disappointing considering for good of a tackler he is and how hard he can hit ball carriers and learning how to punch and strip the football and try to do so consistently will be an important aspect of his development in the NFL. Not much of a blitzer on passing downs, likely due to his exceptional coverage skills, and I would have loved to see him be more active as a pass rusher for his defense. His power at the point of contact can be hit or miss at times and developing more consistency here would help him in the NFL.

Chad Muma is one of those draft prospects that's likely to benefit more so in interviews and workouts rather than testing off the charts at the combine, although I think he'll be fine there as well, and the team that drafts him knows that they're getting a player that wants the team to succeed before he does. He's going to need to adjust to the professional level because the jump from the MWC to the NFL is quite the leap. With a season or two in a rotational role in a linebacker corps a team could have a true 3-down linebacker on the field, a gifted leader on defense, and high quality defender quarterbacking the defense.