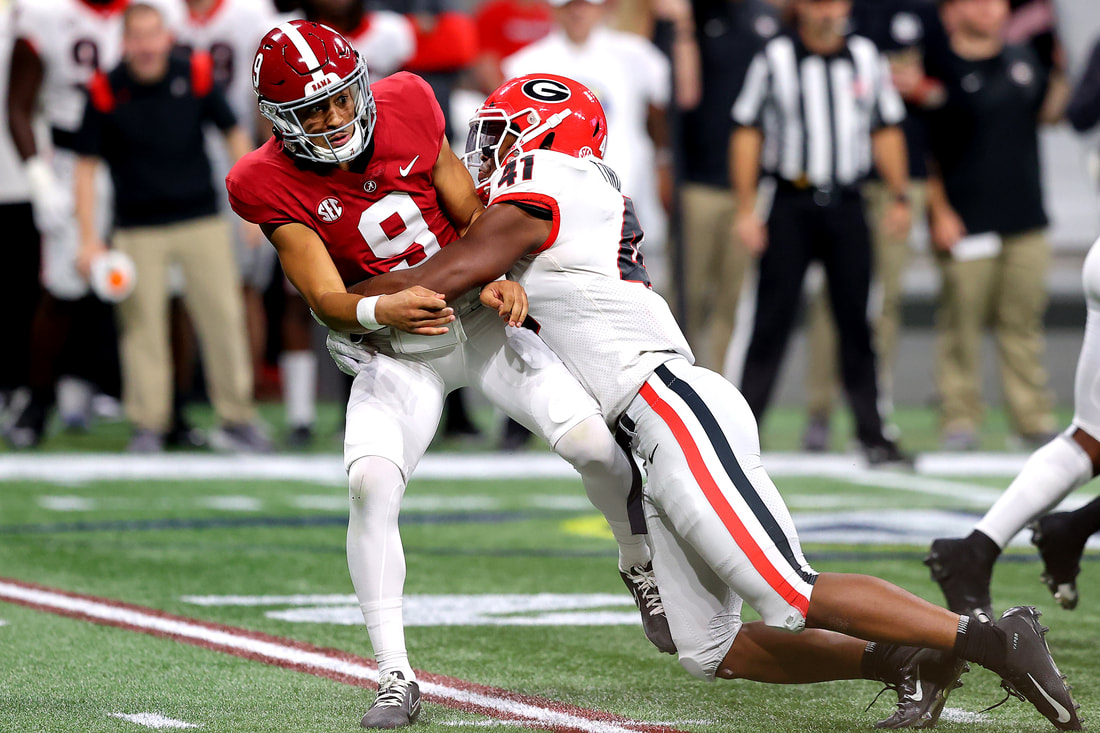 Photo by Kevin C. Cox-Getty Images
The Georgia Bulldogs are going to get a lot of representation in the 2022 NFL draft in its first two days after putting together a title for the ages with one of the best defenses in college football history and one of its many key contributors is linebacker Channing Tindall. At 6'2'' and 230 lbs., Tindall brings elite athleticism, menacing physicality, and excellent pass rush potential. He's a lightning fast linebacker prospect in this draft whose measurements at the combine certainly translate on tape. He played inside linebacker most of the time for Georgia as they like to move their linebackers around everywhere on defense and he never seemed uncomfortable at his spot and never seemed out of the play. When defending the run, he never faced a running back that he couldn't track and hunt down with ease and never found himself unable to make a play with his sideline to sideline speed. He's very good when attacking the line of scrimmage to recognize rush lanes opening up in the line, despite his defensive front dominating in the run game to prevent rush lanes from opening, and when he meets the back in the hole he's very quick to wrap up and bring down. He has exceptionally strong hands to quickly bring down ball carriers and never seems to find himself getting overwhelmed by sheer power or athleticism in his pursuit of the tackle. He can hit ball carriers like a ton of bricks when he gets a clean shot to do so. As a blitzer, he attacks the line of scrimmage with voracity and rare fluidity at the linebacker position as he seems to know how to weave through traffic in the trenches with ease without losing any speed. He brings the pain when he makes contact with blockers as he possesses excellent power for his size and can get significant movement at the point of contact to make a move.  His agility and quickness is off the charts for a linebacker and he can turn on a dime in any direction needed once he's in the backfield to run down quarterbacks and running backs alike. He's extremely flexible for a linebacker and has shown an ability to rush up the middle contort his frame to squeeze through gaps in the line. He takes tremendous angles in his pursuit of ball carriers and has more than enough explosiveness and speed to run them down in the backfield. In coverage, he was exceptional at sniffing out short passes and screens which was often his experience in coverage and he certainly helped his defensive line in this regard with his quick twitch and burst on the pass to bring down the receiver quickly. He's a highly versatile NFL linebacker prospect as he's taken snaps all over the defense with some as an edge rusher and slot corner on occasion and it shows his high level football IQ to take in information and process it quickly. He's extremely tough as a linebacker after some of the roles he was asked to do for his team and he's a highly emotional and competitive leader on the field for his team.

The issue I have with all Georgia defenders in this draft, outside of defensive tackle Jordan Davis, is that there is so much talent around him on the field that it allowed him and his fellow defenders to roam free and wreak havoc everywhere. His defensive line opened up huge holes for him in the interior when he would blitz with Devonte Wyatt, Travon Walker, and Jordan Davis turning the line of scrimmage into swiss cheese for him to basically pick and choose his lane to attack. In run defense, he can at times miss his mark when attacking the line due to the confidence he has that he'll make the play and often gives the running back time to make a move. His coverage skills leave a lot to be desired currently and didn't have to face much adversity in zone or man in 2021 with his defensive line and fellow linebackers often destroying offenses with consistency. He can do a better job fighting through blocks at the line of scrimmage as sometimes he can spend too much time trying to run around lineman rather than having a plan to run through them. I would like to see him try and strip the football more when making tackles as he had plenty of opportunities to and learning to do so will benefit his career in the long run.

Georgia defenders, outside of defensive tackle Jordan Davis, are all very hard to evaluate and rank on big boards and mock drafts because the entire team was filled with freak athletes that had a role and performed it to perfection and the linebackers are by far the hardest to grade because the defensive line in front of them was so spectacular. I think Channing Tindall can survive and even thrive in the NFL on any scheme but I think he'll need a coach that understands his game because it could be a rough transition in the NFL when he doesn't have monsters in front of him. I think he’ll be a reliable starter in his first couple seasons and if paired with the right situation, he could be a high quality player in the NFL.