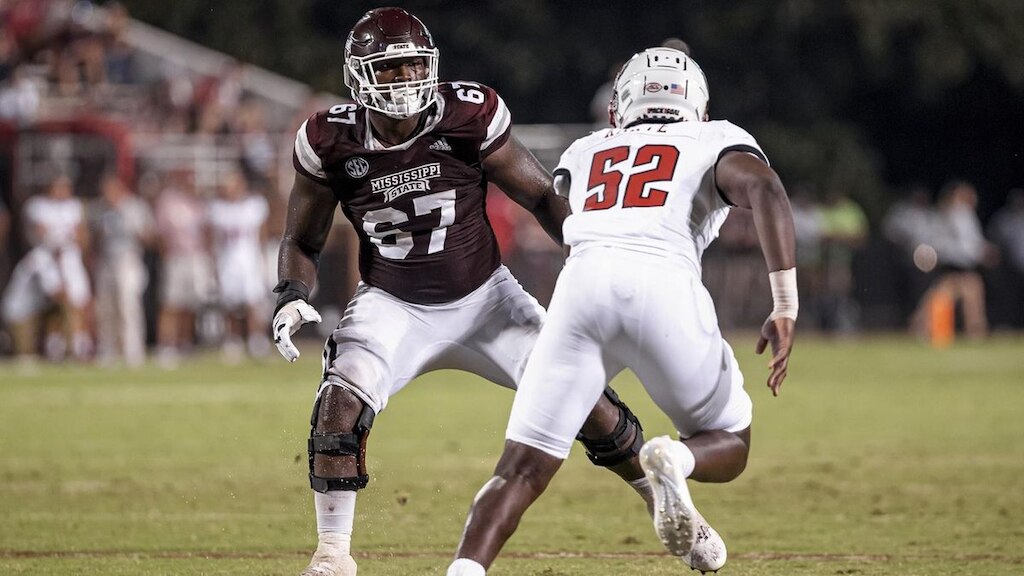 Photo by Austin Perryman-MSU Athletics
Mississippi State has been the doormat of the SEC for a long time with constant coaching turmoil and lack of top recruits committing to the program but even broken clocks are right twice a day and Charles Cross is one of the few players that Mississippi got right. At 6'5" and 305 lbs., Cross comes into the NFL Draft with excellent athleticism and length. He plays in Mike Leach's Air Raid offense where he often is left on an island against a teams best pass rusher and all he did this season was dominate edge rushers and keep his quarterbacks blindside clean. In pass protection, the jump in improvement from 2020 to 2021 when it comes to his overall technique was exceptional and it's a big reason for his rocketing draft stock for the 2022 NFL draft. He comes out of his stance with excellent explosiveness and sound footwork and very rarely is beaten outside. He's exceptional when he's matched up one-on-one with pass rushers off the edge and he showed in 2021 that he can turn stud pass rushers into afterthoughts during the game and ensure his quarterback has a clean pocket. His footwork is phenomenal out of his stance with excellent agility and quickness in his lower half. He has great length in his arms that help him keep his frame clean from defenders and his hand fighting skills are very advanced for a prospect. He has extremely powerful hands that can be like vice grips when gets a hold of chest pads and when he does get a hold of his opponent, it's game over for that player. He showed in 2021 that he can mirror speed rushers off the edge and prevent them from getting to his outside shoulder and he also showed that he's very capable of doubling back on inside cuts from edge rushers and keeping his inside gap clean. He has a good anchor and excellent flexibility in his frame and does a great job of maintaining his balance and setting his feet when being bull rushed. He's very accurate with his punch and does a phenomenal job of timing when his opponent is at his most vulnerable and if he doesn't get a grip on there pads, he's very good at tossing them off their feet with their own momentum. He possesses a very high football IQ for an offensive tackle not just because of his rapid development at the position but also because he's excellent at recognizing defensive concepts and tendencies and was exceptional at spotting and subduing stunts, twits, and blitzes at him. He can be a nasty pass blocker when he starts feeling himself and can ragdoll pass rushers that can't get by him. Mississippi State's offense also calls for the quarterback to stay in the pocket and wait for things to open up and on more than a few occasions, he's had to stay in front of his opponent for over five seconds, often closer to ten, and his ability to keep the blindside edge rusher out of the play for as long as he did is what helped Mississippi State's offense become so potent. Mississippi State is not a running offense in the slightest but he does display traits in his game that give a glimpse at his ability to succeed as a run defender, mainly in the screen game. He's very capable of reaching the second level of the defense with his athleticism and has more than enough speed and agility in his lower half to take linebackers and defensive backs out of the way of the rush lane, giving his receiver room to break off a big play. He comes off the line with great power and explosiveness and although he doesn't drive defensive lineman off the ball very much, you can see that he has the capability to do so. He plays in the SEC against some of the best edge rushers and defensive lineman in college football and going up against NFL pass rushers shouldn't be as tall a task for him as it would be for most. He had excellent outings against DeMarvin Leal, potential top 10 pick in the 2022, as well as Will Anderson Jr., Alabama's phenom edge rusher and favorite for the 2023 #1 overall pick, and it shows his competitive spirit and excellent preparation for tall tasks ahead of him.

Unfortunately for Charles Cross he plays in an offense that is passing at least 80% of the time which will raise doubts about his ability to run block in the NFL. When he's tasked with run blocking, I don't see the nastiness needed to be a consistent force. Most of the run plays that Mississippi State does call come from the shotgun set and often are draw plays, showing very little of his ability to drive defensive lineman off the line. He needs to add more muscle to his frame to better withstand bull rushers in the NFL and will need to become much better at lowering his pad level to maintain better leverage when facing or distributing power in the trenches. His punch doesn't provide the necessary power to consistently stun or pancake defenders and will need to hit the weight room during the offseason to build up power in his frame, especially in his upper half. He can struggle with pass rushers that can both overpower him and/or outrun him off the edge and will need to develop which can be due to his high pad level out of his stance. He's strictly a tackle prospect and might just be a left tackle prospect with his lack of experience run blocking, a primary job of the right tackle on most pro style offenses.

If you're a team with a very pass happy offense and need a plug-n-play blindside left tackle, Charles Cross should be near the top of your board. His prowess in pass protection is among the best in college football and his body of work against some of the best college football speaks for itself. He'll have to bulk his frame and polish technique to truly harness his potential and if he does that a team could steal in the draft. If he can show in workouts that he has good run blocking technique and is capable of developing a more balanced skillset, he could potentially be worth a top 10 pick in the draft. I think he's a quality offensive lineman early in his career and has pro bowl potential as a blindside blocker.