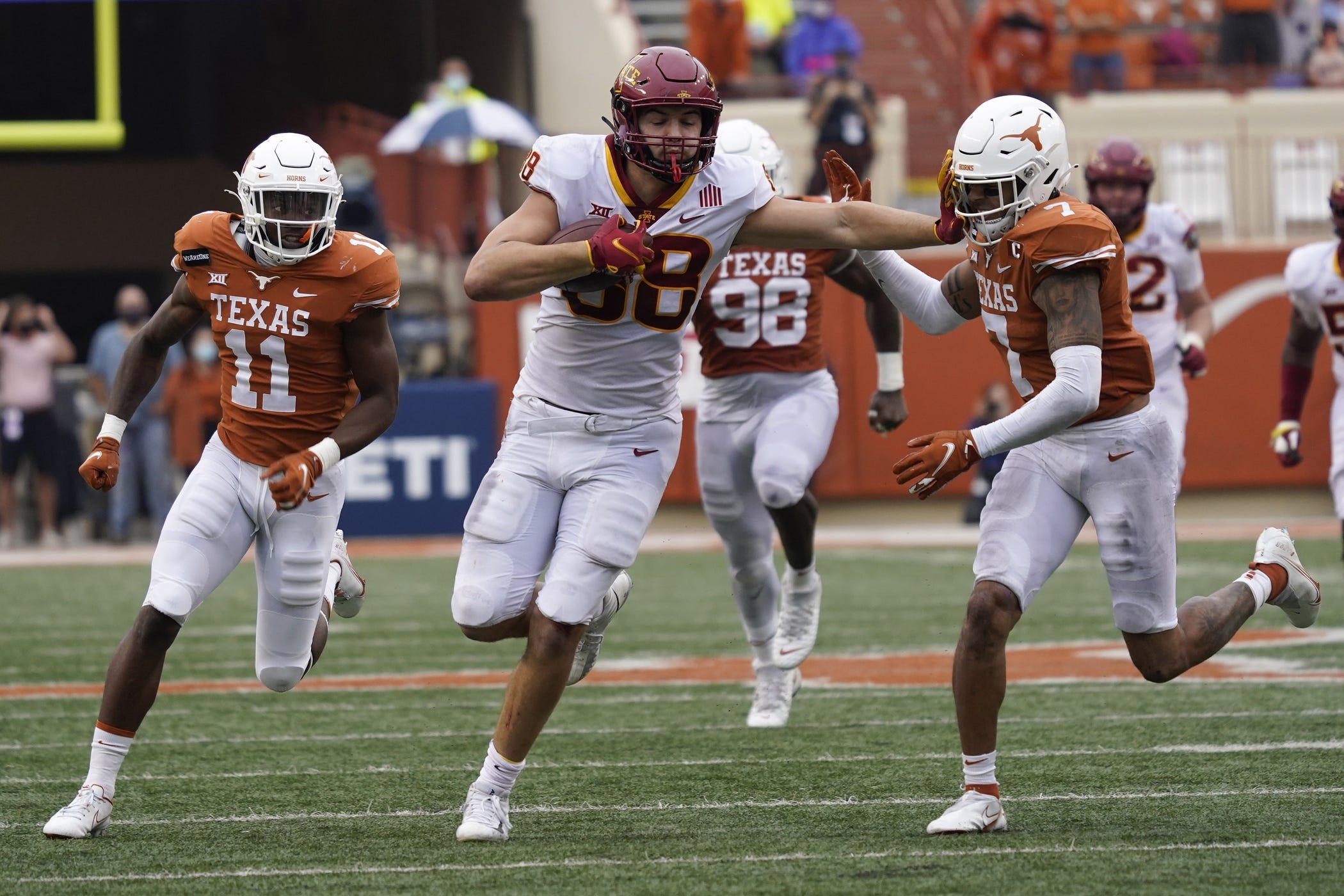 Photo by Scott Wachter-USA Today Sports​
Charlie Kolar out of Iowa State was a man among boys in 2019 and could find himself rocketing up draft boards if he shows that he can perform at the same level. He's a massive tight end at 6'6" and 260 lbs. with very long arms and good athleticism. He's got very impressive hands and surprising hops for a big man with more than a few catches involving him flying over defenders to come down with the pass. He was a chess piece in Cyclone offense with playing on the line, in the slot, and even on the outside. He does an excellent job of boxing out defenders on jump balls and is almost guaranteed to come down with it in man coverage. His catch radius is huge and is going to be a problem in the NFL. He goes after the football in the air and does a nice job of catching footballs at the highest point. Very good at getting separation through technique which should immediately transfer into the NFL. He's a good route-runner with a good route-tree and has proven to be a threat at all levels of the field. He's very good at finding weaknesses in zone coverage and commands a defense's best coverage player when he is put out in the slot or on the outside. He was consistently targeted on 3rd downs and redzone throws and almost always came through. His big body allows him to hold onto the football through contact and should find early success on dangerous throws. He's a willing blocker who makes an effort in the run game and was a key blocker on many of fellow draft prospect Breece Hall's big runs. 2021 was not a great year for Kolar's quarterback in Brock Purdy and it showed how important of a player Charlie Kolar was to the Cyclones offense. He's a clutch player who seemed to always come through when the moment called for it, just ask Oklahoma in 2021 when Iowa State finally started throwing to him in the 4th quarter.

Far too often gets tackled by the first guy he faces and does a very bad job of getting yards after catch. He lacks lateral quickness and only has average speed which doesn't bode well for teams expecting him to break open plays after the catch. For a guy who possesses the size and length that he does, he seems to have considerable struggles at maintaining and at times even engaging his blocks and will need to possibly be re-coached in this area of his game. Too often finds himself back pedaling while he blocks and while he gives an effort in the run game, he's rather ineffective. No nastiness to his game outside his catch ability in traffic and will need to develop a mean demeanor if he hopes to develop into an effective blocker.

​He's the definition of a possession tight end which is certainly not a bad thing heading into the draft but his blocking for man his size has to improve if he wants to find success in the NFL. He's too big and too strong to not effectively take defenders on in the run game and make impactful blocks and coaches are going to have grind on him early and often in practice. However, if you a team in need of big-bodied tight end that can pick 3rd and 10 in the 4th quarter to keep a game winning drive going then Kolar is your man. I have no doubt about his pass catching ability which will probably be his primary selling point as a prospect.