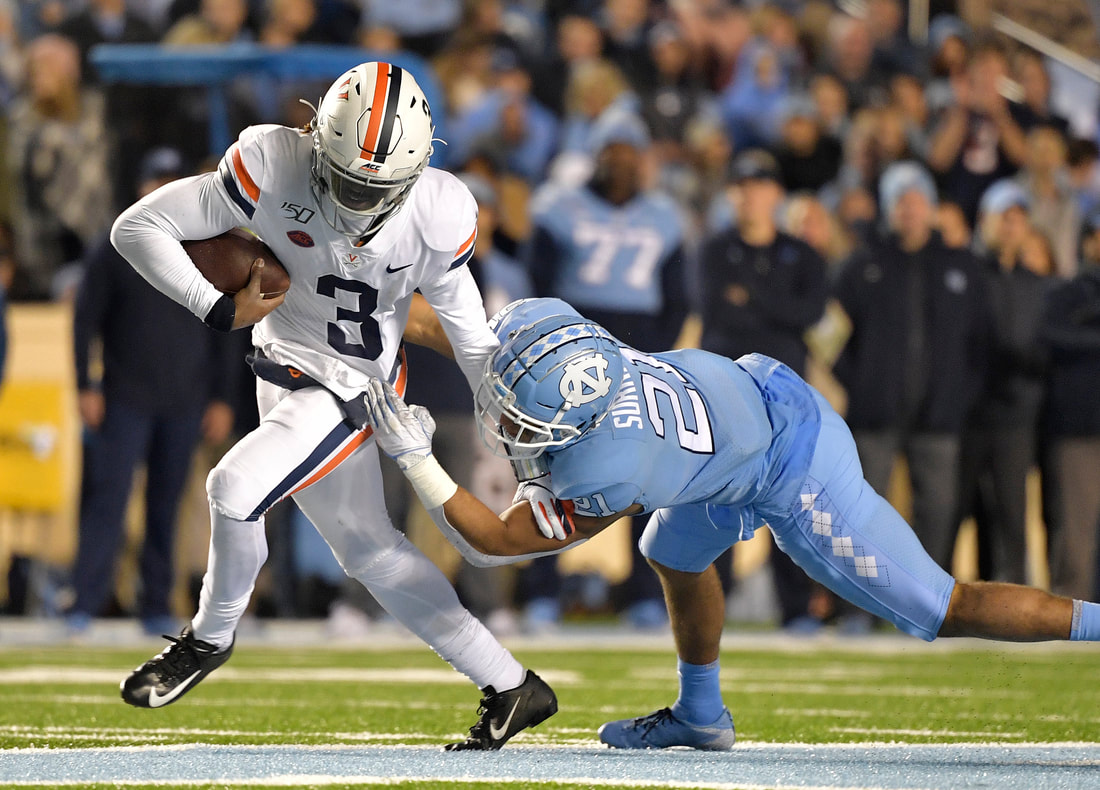 I can't think of a more difficult position transition for a player in college football than going from quarterback to outside  linebacker but Chazz Surratt did a phenomenal job in 2019 with transition and earned himself quite the hype train after playing very well against top competition and only got better during the 2020 season. He has great size for a linebacker at 6'2" and 225 lbs. with a very muscular frame and very good athleticism. He has excellent burst out of his stance and impressive closing speed when pursuing running backs. He lined all over the Tar Heel defense and was making plays constantly. He's got an incredible nose for the football and awareness of what an offense is doing. He has the necessary size and athleticism to play in any scheme, making him one of the more versatile prospects in the draft. He's a surprisingly great tackler and does a great job of bursting through holes in a line and making a play on the ball carrier. He's got excellent speed to go from sideline-to-sideline to make plays. Has excellent agility to stop and change direction as well as enough pursuit speed to catch a ball carrier from behind. He's got probably one of the highest football IQ's in college not only based on the success of his transition but also how he reads offenses given his former position being quarterback. He has a great motor and never stops playing until after the whistle.  He's got the size of an inside linebacker and lined up quite a bit in the middle which made him such a force on the stat sheet, especially in total tackles. Has proved himself to be one of the best blitzers in the draft with the ability to both rush off the edge as well as up the middle and do so with consistency. He does an excellent job of disguising his blitzes and timing them for maximum effect on an offense. He does an excellent job of reading blocks and attacking holes in the offensive line making it easy to penetrate an offensive backfield. He proved himself to be a great leader at North Carolina both as a quarterback and linebacker and should win over a lot of teams in interviews.

He's noticeably raw in coverage and can get lost easily when playing zone coverage. He can fall for shallow routes too easily for shallow crossing routes and leave the middle of the field open for attack. He doesn't try to attack the ball in their air enough and will need to get more aggressive at batting away passes. He doesn't attack the football enough when making tackles and looking for the punch or strip will greatly improve his chances of success in the on defense. Hasn't had much experience in man coverage and covering slot receivers and running backs in the NFL will prove to be very difficult early in his NFL career. His ability to read offenses and attack has allowed him to hide his lackluster ability to shed blocks and make tackles as his ability to disengage from blockers is sub par. He can attack ball carriers too high at times, allowing them a chance to break away from his turn up field. He attacks lineman with poor pad level when blitzing and often finds himself getting driven out of the play.

His improvement from his stellar 2019 tape to his 2020 tape is very exciting to see and his refinement in his skills is going to entice many defensive coaches throughout the NFL. If he can continue his growth with his coverage skills and learn to deal with offensive lineman better, a team could have chess pieces on defense that can wreak havoc.