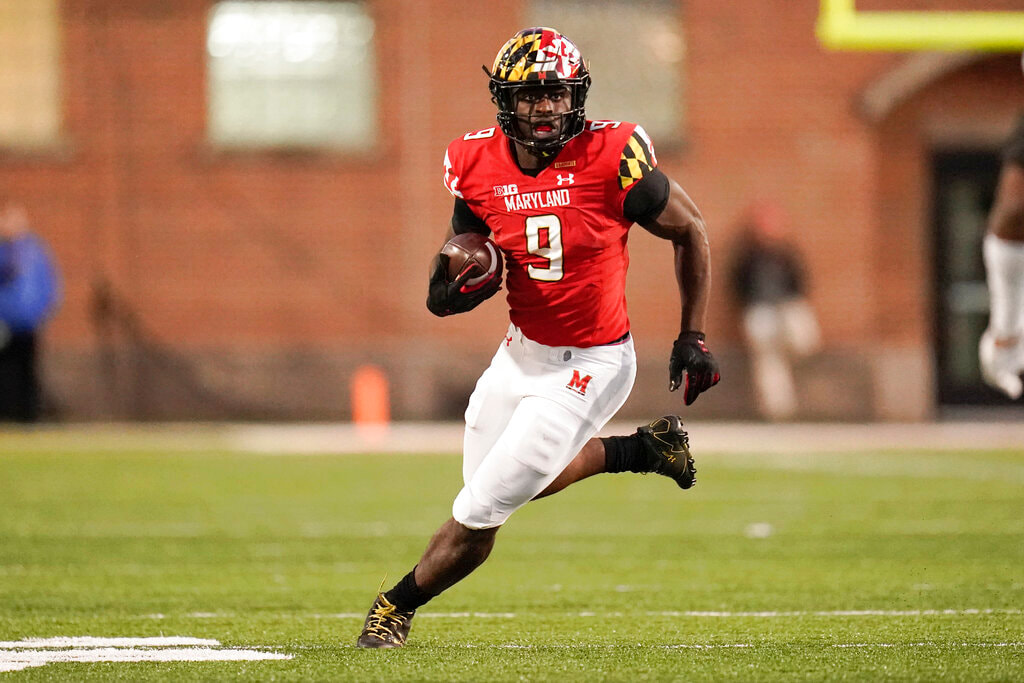 Photo by Julio Cortez-Associated Press
One of the more uniquely built prospects in the NFL draft, Chigoziem Okwonkwo was one of the best players on the Terrapins offense in 2021​. At 6'2" and 240 lbs., Okonkwo brings exceptional athleticism, excellent versatility, and deadly playmaking ability. The 40 yard dash king among the tight ends at the NFL combine, Okonkwo put the NFL on notice with his impressive numbers and those gaudy numbers show up on tape as well. Okonkwo is highly explosive in his first step off the line and can win a route very quickly if his opposing defender isn't on his game. He possesses nuance and detailed footwork in his route with rarely a misstep and it has allowed to dominate linebackers and safeties on defense. He gets tremendous separation at the top of his routes consistently and was a very good safety valve receiver for his offense when the quarterback came under fire. He possesses good hands and a decent catch radius for his size which has made him a highly trustable player to throw to under duress with his ability to secure tough passes. He possesses a very good route tree that features routes short and deep as well as tight end screens and pitch-n-catches that have been deadly to defenses. Okonkwo is a highly tenacious receiver on jump balls that possesses both the upper body strength and leaping ability to rip away passes in traffic. His best attribute as a prospect is his run after catch ability because Okonkwo can be a dynamo on the field. He plays like a running back after the catch with exceptional evasive maneuvers and ball carrier vision that has allowed him to take short passes and screens and turn them into big gains and points. He's a powerful runner of the football that often has required two tacklers to bring him down and when hits a defender tackling him square up, he can leave a dent in someone's helmet. He's an incredibly versatile weapon in the passing game with ample snaps at all possible receiver positions in college and was even tasked with running the football for the Terrapins and has two rushing touchdowns on his resume because of it. He's a very willing blocker in the run game and certainly has shown an ability to level defenders in his way. He's a high motor player with a fiery competitive streak to him and teams can be sure that he'll give them everything he has.

His unique frame and size may hurt his chances to come down with contested catches in the NFL despite his aggressiveness when attacking the football. He's built more like a fullback than a tight end, his ability as an in-line blocker and I don't think he'll find much success in a traditional role. He's not a tight end that's going to test, threaten many defenders, overwhelm defenders with his size and will have to win most battles with his route-running and separation. His blocking technique needs considerable work and he'll likely struggle in this regard most of his career. He's highly scheme specific as a prospect and may require a very talented offensive mind in the NFL to get the most out of his potential.

Chigoziem Okonkwo is a literal clone of Jordan Reed who was a dynamic offensive weapon before injuries forced him out of the NFL and I don't take this comparison lightly. In the right offensive system, Okwonkwo can dominate in the NFL with athleticism and ability to make plays anywhere on the field and teams are always looking for players that can change a game in an instant. In the wrong system, I am not sure he makes that field and I doubt a team would look at his positives as a prospect over his lacking size for the position. It's all about scheme when it comes to his success in the NFL and the right team in the draft is likely to draft and reap the rewards.