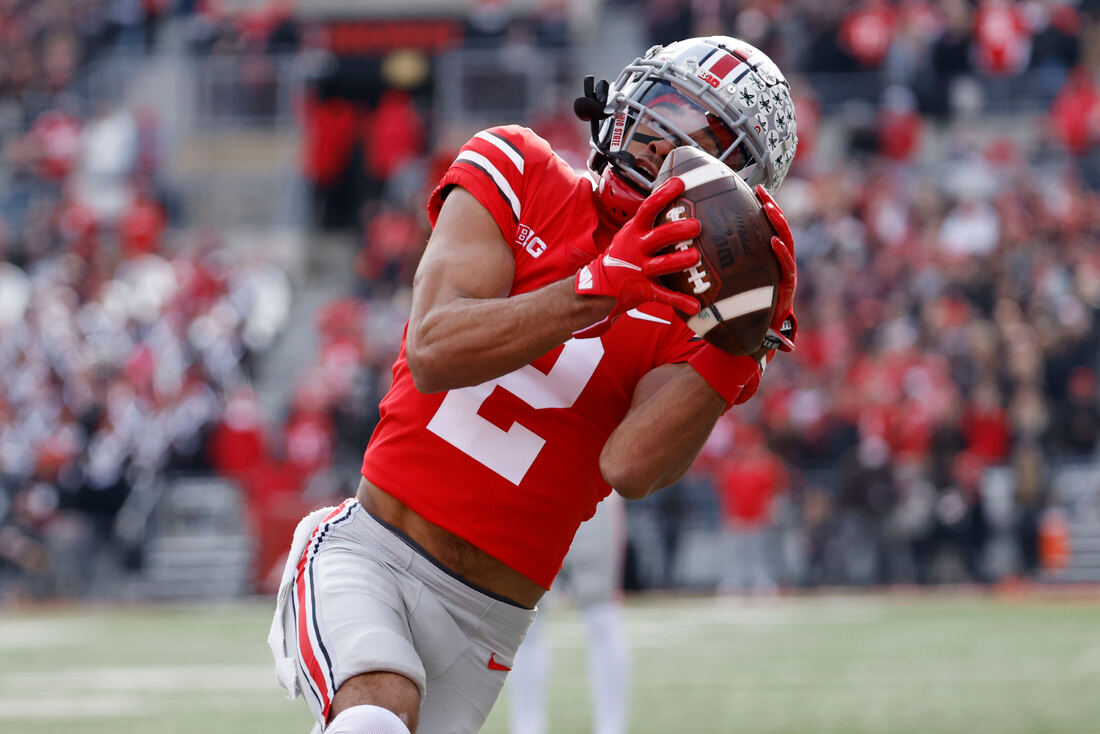 Photo by Rick Osentoski-USA Today Soprts
Chris Olave has been one of the best receivers in college football for the last three seasons and is coming into the NFL draft as a very seasoned NFL draft prospect at the receiver position. At 6'1" and 190 lbs., Olave brings outstanding athleticism and route-running technique. I would feel comfortable calling Olave the best route-runner in the NFL draft and I don't believe it's a close race because he possesses one of the biggest route trees in the draft and can run each of them to perfection. He always seems to have at least 5 yards of separation between him and the cornerback covering him and has one of the best releases in college football. He possesses very good hands and excellent speed for a receiver. He possesses good versatility for a receiver that has experience both outside and in the slot. He has phenomenal agility in his feet and allows him to change direction on a dime both on his routes and in the open field. He has excellent hands when the ball is thrown at him and he does a great job of tracking the football of deep throws. Does a tremendous job of getting separation early in his route with his textbook footwork and agility and makes every play a difficult one when to predict for his opposing defender. He's a redzone technician with his top level route-running and knows how to find weaknesses in zone coverage and exploit openings left by the defense. Olave can go vertical for jump balls as he does possess great explosion in his lower half, however because of his route-running and separation, you can rarely see it. Olave’s ability on the outside has been a big reason for Ohio State’s phenomenal passing attack and was #11 overall pick Justin Fields favorite target in his 2 years starting for the Buckeyes as well as future first pick in C.J. Stroud. He is probably the best receiver in the draft at working along the sidelines and has some of the best boundary awareness you'll ever see. Does a great job avoiding big hits by getting up field quickly and then jetting out of bounds or falling down. When Ohio State needs a clutch catch to get a 1st down, field goal yardage, or points on the board Olave has been option #1 for them with his ability to get open anywhere on the field. He’s a very competitive player on and off the field and shows up  for his team when the lights are brightest.

He's not a great yards-after-catch receiver and may only ever be a possession receiver in the NFL. He doesn't make much of an effort to break away from tacklers in the open field and rarely utilizes his speed and agility to juke and spin away from defenders to get more yards. He has mainly had success along the sideline and doesn't often cross into dangerous waters in the middle of the field. While he has excellent hands, I don't know how they will perform when he takes NFL hits from safeties at the point of the catch as he rarely, if ever, is put into a position to get hit. He struggles mightily in press coverage with his lack of muscle on his frame and needs to do a better job of disengaging from corners and getting on his route. His catch radius is average and due to his superior route-running I haven't seen many catches outside his frame. His size limits his ability to come down with jump balls and his lacking strength in his frame doesn't help when he has to muscle passes away from corners. Although I would say Olave was the better of the two, Garrett Wilson does force single coverage on Olave early and often and it could be a learning for Olave to be by himself as the clear cut #1 receiver on an NFL team.

Chris Olave has one of the highest floors in the draft as he’s coming into the 2022 season with lots of snaps and playing against some of the very best schools and players in college football. He made every cornerback he's faced look silly at times with his elite route-running and athleticism and should be a scary player early in his career. He's not going to get many yards after contact and isn't going to win many jump balls but his elite skill set allows to still make life easy for a quarterback throwing in his direction because of how surgical he can be at separating from defenders and getting wide open. He possesses one of the highest floors in the draft and should find himself on a pro bowl roster early in his career.