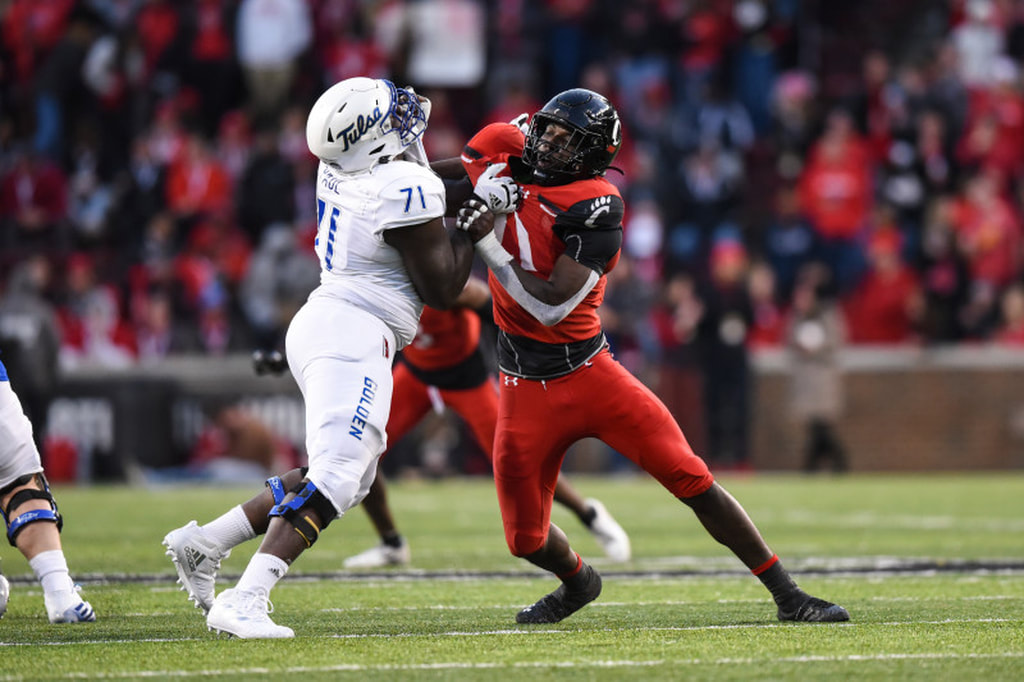 Photo by James Black-Icon Sportswire via Getty Images
If there was a player in college football that was in need of complete position change to find success it would be Tulsa right tackle Chris Paul who would really benefit from a move to guard to prolong his potential NFL career. At 6'4'' and 325 lbs., Paul brings elite athleticism, exceptional power, and outstanding leadership skills for the position. Chris Paul forced NFL teams to re-watch his college tape after scorching the 40 yard dash at his size which is immense and you can see on tape that when he's moving forward, he can be a devastating blocker. He has a huge frame with immense power in his base and chest that will rival any defensive lineman he faces. In pass protection, he displays excellent length for the interior of the offensive line and should live hell for defensive tackles that don't have the arm length to attack his chest. He has quick hands to potentially swipe and club defensive lineman punches with consistency and does a great job of using his length to its fullest extent. He has an extremely powerful punch when it lands and it can rock any NFL defender off their feet when he times it well and is accurate. He has phenomenal grip strength when he locks into an edge rusher's pads and this trait of his should translate well when facing defensive tackles on a regular basis. When he can cinch his hands in his opponents chest he can establish a very good anchor with his ability to muscle his opponents pads up which tells me that he's got some potential in him somewhere. He's a finisher in pass protection when he is in good position as a blocker and has the ability to slam edge rushers to the turf and sit on them for his offense. He's very good about keeping his opposing player in front and doesn't get flagged for holding. In the run game, he comes off the line of scrimmage with good power at the point of contact and can topple defensive lineman when he can get low pads. He's a proven player at making blocks in the second level and does a good job of taking advantageous angles when blocking linebackers and safeties. He possesses tremendous character and is a great player to have in a locker room which tells that he'll do his best to learn and develop his game for his team. He's a versatile prospect with ample snaps at guard and tackle and could potentially learn how to play NFL guard quicker than other tackles switching positions due to his familiarity with the position. His versatility also tells me that he has a good football IQ and if given a more permanent position in the NFL he could blossom into a pretty good player with time.  He's a tough and competitive player that gets right back up when he gets knocked down, both metaphorically and literally, and you can be sure that he'll give his all on every play.

He's a complete and total rebuild from a technical standpoint and the team that drafts him has their work cut for them, whether at guard or tackle in the NFL. He jumps straight up out of his stance with a high pad level which leaves his opposing lineman an opportunity to establish an effective bull rush off the snap. His hands at the snap can be stretched out a bit which exposes his chest to defenders that can one-arm stab or push-pull move him out the way. His eyes move much faster than his feet and his reactivity to defenders running around him or getting shifty against him on the edge is subpar at best. His punches are certainly hit or miss when it comes to accuracy and has fallen victim to swipes and clubs from defenders. He's faster than he is quick as an offensive line prospect and teams that have a more run based offense probably will get better production out of his than in a pass heavy system. His punch timing can also be improved as his inconsistency in this area can mitigate his power. His high pad level as a run blocker hurts him quite a bit when driving lineman off the snap as he immediately gets stood and is forced to try and quickly turn his man out of the hole. He's not great about keeping his inside gap clean from edge rushers crossing his face and attacking it or defensive lineman in the interior trying to work through it and at times it can look like a biblical parted sea for defenders to dash through. Blitz pickup is something he struggles with as well as doesn't recognize it until it's too late and often was targeted by defenses because of this issue. He's not very flexible for a big man and this affects his ability to anchor on bullrushes occasionally. He could use more of a nasty streak as an offensive lineman and he'll need one if he makes the transition to guard in the NFL.

Chris Paul may have struggled in college in his career not because of an inability to play offensive lineman at a high level but rather he lacked consistent reps at a particular position considering Tulsa moved him around quite a bit on their line. Could he play offensive tackle and guard in the NFL? Yes due to his athleticism and build but his issues with quickness and agility from edge rushers will be mitigated in the interior and it will allow him to develop his game at a faster pace. I think he's got great potential as a guard in the NFL because he possesses rare athleticism and length for the position and his current style of play will make a better transition to the position. In time I think he can be a reliable starter for a team that knows how to extenuate his strengths and mitigate his weakness in the interior.