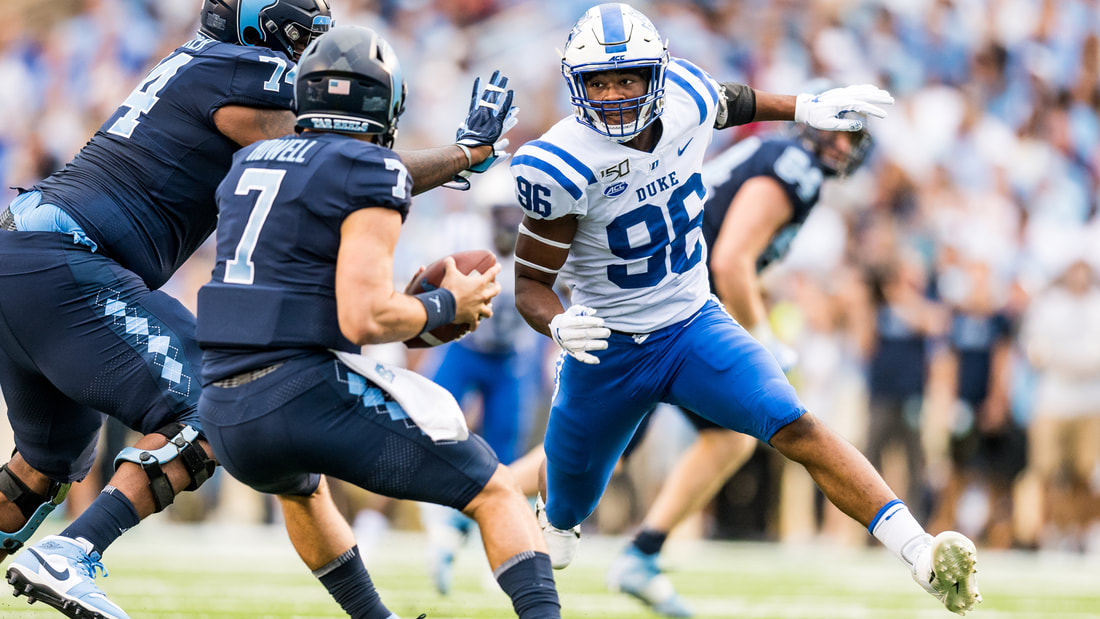 Duke early in the 2020 season boasted one of the best pass rush tandems in college football with Chris Rumph II being the more potent rusher of the two. At 6'3" and 235 lbs., Rumph II brings a lot of speed and explosion to the game. He has a filthy fast first step off the line and can catch even the more athletic offensive lineman off guard if they are a hair late. He has tremendous athleticism at his size and beating his opponents with speed is how he wins his battles. Whether it's racing around the edge or chasing quarterbacks and running backs outside the pocket, Rumph II has more than enough speed to get the job done quickly. He's a flexible pass rusher who can quickly run and duck under and offensive tackle as well as bend the edge to create pressure quickly. If a ball carrier cuts back or if a quarterback climbs the pocket, Rumph II has the footwork and agility to change direction on a dime. He's a very good technician with his pass rush as he can effectively swim move, spin move, stutter-step, and one-arm swipe offensive tackles and get to the quarterback with ease. He's one of the few pass rushers in this draft that does have a plan be when his initial move fails, often using a spin-out move when attacking the outside or his swiping his opponents hands to redirect himself, and never finds himself completely out of the play. He's an excellent hand fighter who fast can make quick work of slow punches. He was used all over the Duke defense in college as both a stand-up pass rusher and defensive end and could be a deadly gap shooter for an NFL defense. He plays very low to ground and can at times find himself sneaking through gaps and causing a play to end early. Being the son of a coach, Chris Rumph II has been taught from a very young age to play with 110% effort on the field as well as off it and he's as competitive a player as you'll find in the draft. He's usually the smartest defender on the field and Duke allowed him to at times pick and chose his gaps to rush as he can read offenses and surgically strike where an offensive line would be weakest.

His lack of size relegates him to strictly a stand-up pass rusher in a 3-4 scheme. He lacks the bulk in his frame and as well as the power behind his hands to bull rush offensive lineman. He can be a liability in run defense with his lack power in his frame and isn't going to hold his end of a line with a play bounces outside. He needs to improve his grip strength as a tackler because he's prone at times to getting shrugged off his doesn't get the right angle on a quarterback or running back. He doesn't attack the football enough when making tackles or sacks which a trait that every NFL defensive coordinator is looking for in a pass rusher. If an offensive tackle gets into his chest it can be an play-ender for him especially if said offensive tackle has great grip strength. He doesn't bring a lot power at the point of attack and he's going to knock offensive lineman off balance and will solely rely on his speed to make plays.

Chris Rumph II is a situational pass rusher in the NFL who might be able to pick and choose his spot sin the NFL His high football IQ and excellent athleticism is going to entice every team with a 3-4 scheme to go after him later in the draft. His lack of schematic versatility as well as thin frame and lack of power are going to cost him however. In the right scheme and coach, he could be a draft diamond in the rough.