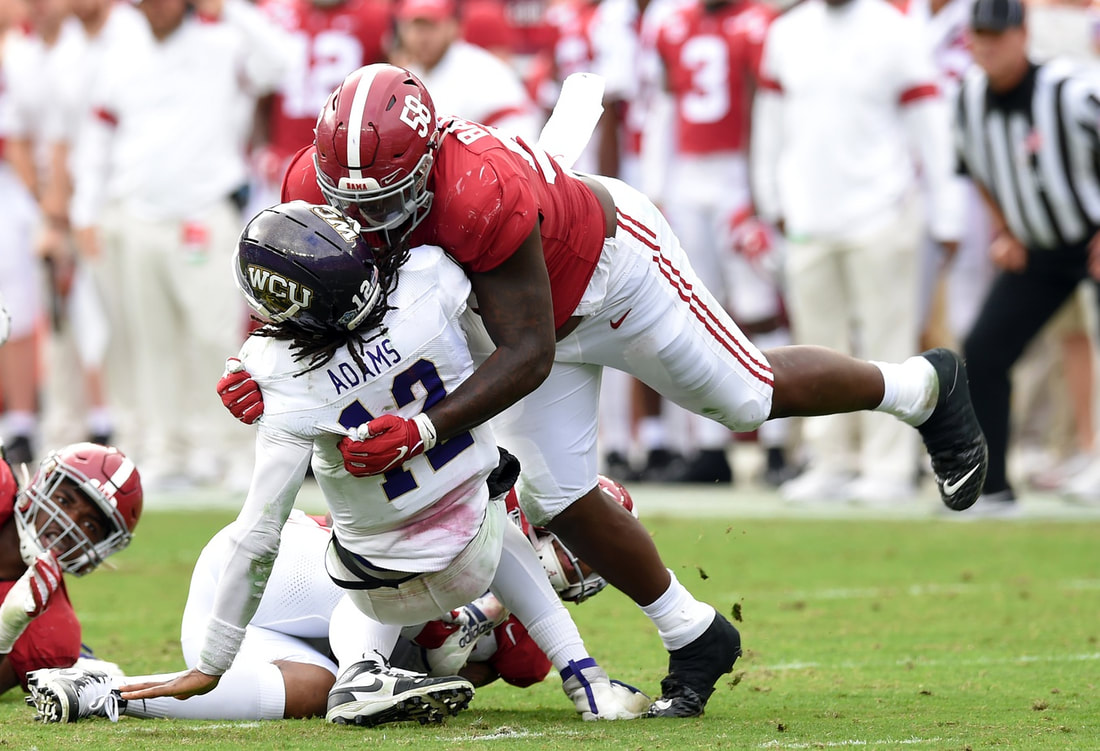 Christian Barmore looks to be the next defensive tackle to come off the Crimson Tide defensive conveyor belt and hit the NFL and he sure has the talent to thrive. He's an impressive prospect at 6'5" and 310 lbs. with exceptional athleticism and elite level length. He possesses very long arms and strong hands to make shedding blocks and arm tackling running backs easier and impressive power in his upper and lower body to wreak havoc in the trenches. He's got a very technically sound swim move and impressive quickness once he gets by. He's got enough athleticism to lineup anywhere along the defensive line as well as in any defensive front and produce. He does a great job of bull rushing through double teams and can wreck a game plan quickly if unchecked. He does a good job getting his hands in the air to block passing lanes and his big and heavy hands make life very difficult when throwing over him. He was surprisingly effective at stripping the football from ball carriers with his strong hands and a skill like that will get you far in the NFL. He's mainly played the 3-tech position but has the athletic ability to line up in any scheme. He does a good job of moving down the line make a play. He's extremely explosive off the line of scrimmage and can overwhelm lesser athletic guards. There was no better defensive lineman in college football in 2020 when it came to collapsing the pocket and creating pressure up the middle and teams looking to see what kind of player he could should look at his film later in the season. Was a dominant presence in the college football playoffs and gave the extremely talented Ohio State offensive fits all throughout the championship game.

He hasn't played a lot in his career which means limited tape on him but his flaws as a defensive lineman are evident. He plays with inconsistent pad level and will need to bring his shoulders way down if he wants success in the pros. He lacks a great deal of pass rush, mainly winning with his athletic prowess and a swim, and will have to show in workouts that he has more pass rush technique than his film has shown. He has only started for one season at Alabama and while the tape is good, it may not be enough for some teams. His motor is questionable at times as he can give up on plays if he feels he has been beaten and can fail to chase ball carriers if the get the edge on him.

Christina Barmore was an underrated defender on the Alabama defense and I am not sure that if he wasn't playing in the championship game that the Tide would have won so easily. He showed improvements in his technique from game to game and if he can display an improved level of technique in workouts he could sneak into the back half of Day 1.