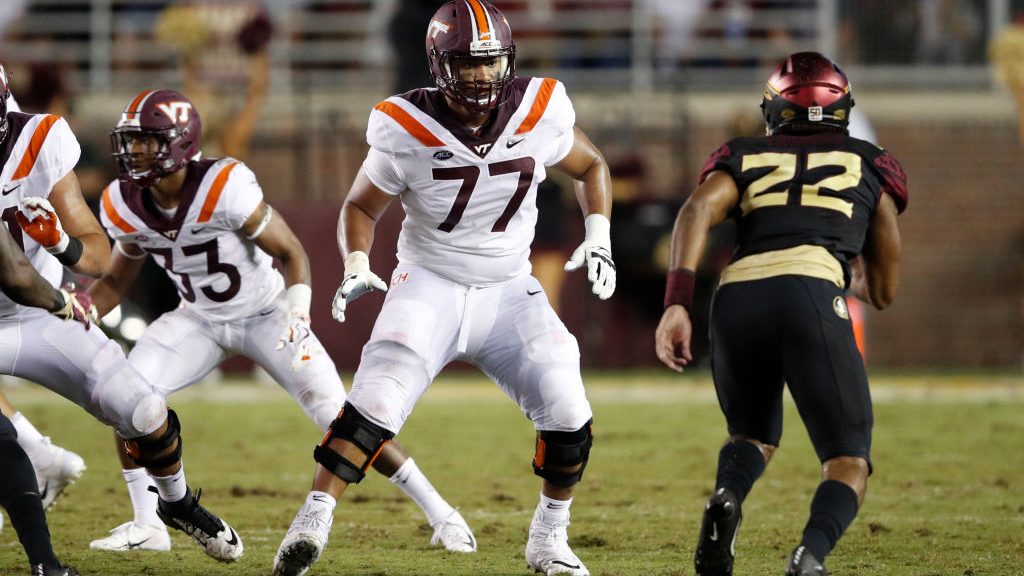 Christian Darrisaw has experienced a meteoric rise in draft as of late due to his incredible 2020 performance that saw the Hokies run game dominate at ACC. Darrisaw brings an NFL ready build at 6'5" and 315 lbs. with long arms and excellent athleticism. He plays with a maulers mentality coming off the line of scrimmage with great pad level and tremendous leg drive. He's very good at upending his opponents and getting his power underneath their chest, driving them back with ease. He's very good at creating rush lanes by turning his defenders out of the gap and driving them into the ground. He has excellent explosiveness out of his stance which allows him to establish the upper hand early on run plays. He can be a pancake machine when leading a convoy on big runs and can be a linebacker's worst nightmare when in the open field. He's very good at disengaging from lineman and attacking the second level of the defense in order to extend runs. He's a good decision maker in the open field and rarely blocks the wrong player on run. He has very strong hands that are difficult for defenders to break away from. In pass protection, he has excellent short area quickness and rarely finds himself on the losing end a stutter-step. He's very good at keeping his inside clean from defenders and rarely falls for stunts and twists. He's a good hand fighter and does a great job of keeping hands away from his chest. He has good balance in his lower body which allows him to handle stronger defenders that utilize bull rushes. His aggressive style of play comes in handy when he catches a pass rusher giving up his footing because he will drive them down into the dirt and make them pay. He has shown ample progression since entering college football and showed in 2020 that once he puts his game together he can be an incredible blindside blocker, especially in the run game.

Still has room to grow in his functional strength as a blocker but time in the weight should improve. He survives a great deal off of his explosion in college football but when faced with equally athletic players he can struggle. He can be too eager to cover his inside which can give pass rushers a shorter pathway to bend the edge and it will be a problem against more experienced NFL defenders. I would like him to pop out of his stance faster in pass protection.

I think he's one of the most NFL ready run blocker offensive tackles in this draft and his NFL ready build is going to intrigue teams in need of an offensive tackle. He's going to find success early on a run-heavy offense in the NFL and will be a pro bowler in his career before his second contract in the NFL. He will need some refinement in his pass protection but he checks all the boxes you would expect a rookie to check.