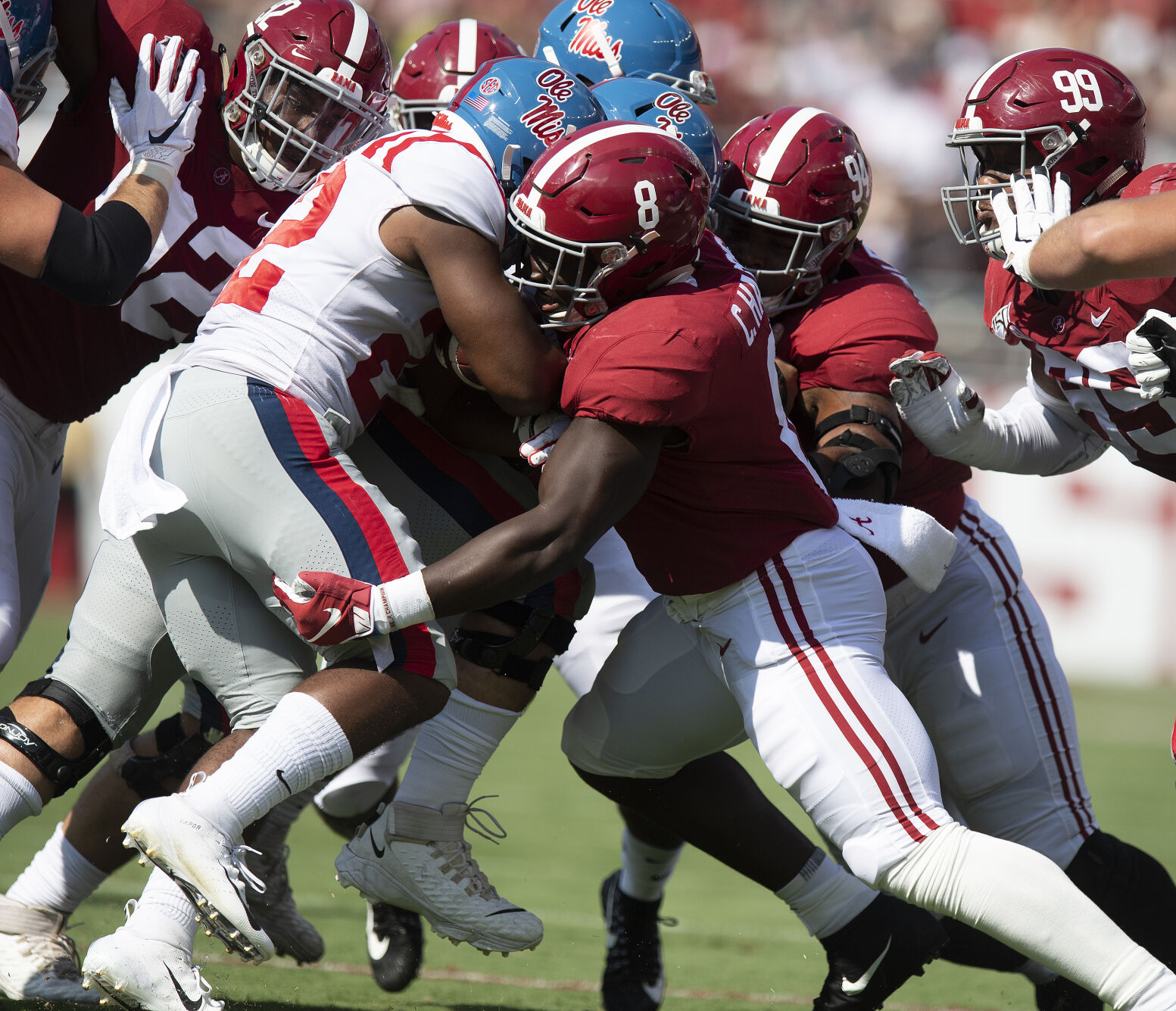 Photo by Mike Welsh-Dothan Eagle
Alabama has always been a factory defensive talent and linebacker has always been one of their most underrated positions however Christian Harris changed some people's minds in 2021. At 6' and 226 lbs., Christian Harris brings a muscle packed frame with outstanding athleticism and strength. He's probably the strongest linebacker in the NFL draft with his ridiculously compact and powerful frame and it's not hard to see on the field. As a blitzer, he plays with excellent explosiveness and power when attacking the line of scrimmage. He brings a great deal of impact when making contact with offensive lineman and has shown the ability to power through blocks and still make plays. He has great pursuit speed when in the backfield and has shown the ability to bring down ball carriers quickly from behind. He played more at the line of scrimmage in 2021 for Alabama and certainly forced running backs to bounce out of the hole when they saw him running through the line. He has excellent twitchiness in his lower half to stutter step and avoid blocks from lineman and doesn't lose any speed when doing so. He blows up chip blocks by running backs and tight ends when he's coming through and can lay the wood on quarterbacks once he makes contact. In run defense, he lives at the line of scrimmage and is fearless when attacking the teeth of the trenches. His impressive twitchiness helps keep himself clean from blocks at the line of scrimmage by dodging punches and slipping blocks and has on many occasions been a run stuffer at the line for the Crimson Tide. He has been a key contributor in goal line scenarios and will hold his ground on short yardage runs. He has good open field tackling ability with his quickness and agility and his power in his torso and arms helps him make one-arm tackles if guys get by him. He does a great job of playing clean up in run defense when ball carriers are standing up but don't go down and often lay a big hit when he sees his shot. In coverage, you see a linebacker with excellent instincts and more than enough athleticism to guard slot receivers and tight ends which he did on a regular basis in 2021. He does a nice job of sticking to his receiver in man coverage and rarely lets them get behind him. He does a nice job of defending passes in coverage when thrown at him and has some nice swats in his career. Not bullied by tight ends and does a phenomenal job of making contact at the line and forcing them out of their routes. He's started in all of the games he's played except one which shows how much trust Alabama has in his ability. He's a tough and rugged Alabama linebacker that will do whatever is necessary to make key plays. He has played very well under the bright lights on many occasions for Alabama and brings his best game against the best competition.

Christian Harris, unlike most Alabama prospects, is very raw for the linebacker position and his lack of development can rear its ugly head occasionally. He too often finds himself getting stuck in the wash of the offensive line because he lacks the length and technique to shed blocks quickly. He has too often found himself on the wrong side of a misdirection or trick play by the offense and has to chase down ball carriers with a very large head start on him. He's not the most technically sound tackler as he relies far too often on athletic traits and ridiculously powerful build to drag and bring down ball carriers and too often goes for the big hit rather than wrapping up and tackling. Alabama has always had a talented defensive roster and oftentimes Alabama players head into the NFL and struggle due to mistakes they make not being masked and teams will have to do their homework on Harris to make sure he's not just a product of the system. He can at times attack the wrong gap in run defense and leave holes wide open for running backs to run through. He needs to try and attack the football more when making tackles as he has the power in his upper body to rip out the football with ease. He's not a polished pass rusher or blitzer when it comes to initiating pass rush moves and will need to learn some in order to succeed at blitzing in the NFL. He has a rigid frame that doesn't give him much flexibility and squeezing through cracks in the trenches to make plays is not a trait has shown he can do. His 2020 season looked better than his 2021 season likely due to key defensive players leaving for the NFL draft, Patrick Surtain II and Christian Barmore to name a few, and that will need to be analyzed by NFL teams.

Christian Harris has been one of the few bright spots of an Alabama defense that was prone to giving up big games. His stoutness against the run and surprising coverage skills shows a linebacker, although in his technique, is developing well despite a down year in 2021. Defensive coordinators are going to be watching very closely in workouts as well as his combine performance in February and if he shows out, he could find himself shooting up draft boards. He's got the makings of a quality inside linebacker in the NFL and if put in the right defense, he could flourish very quickly.