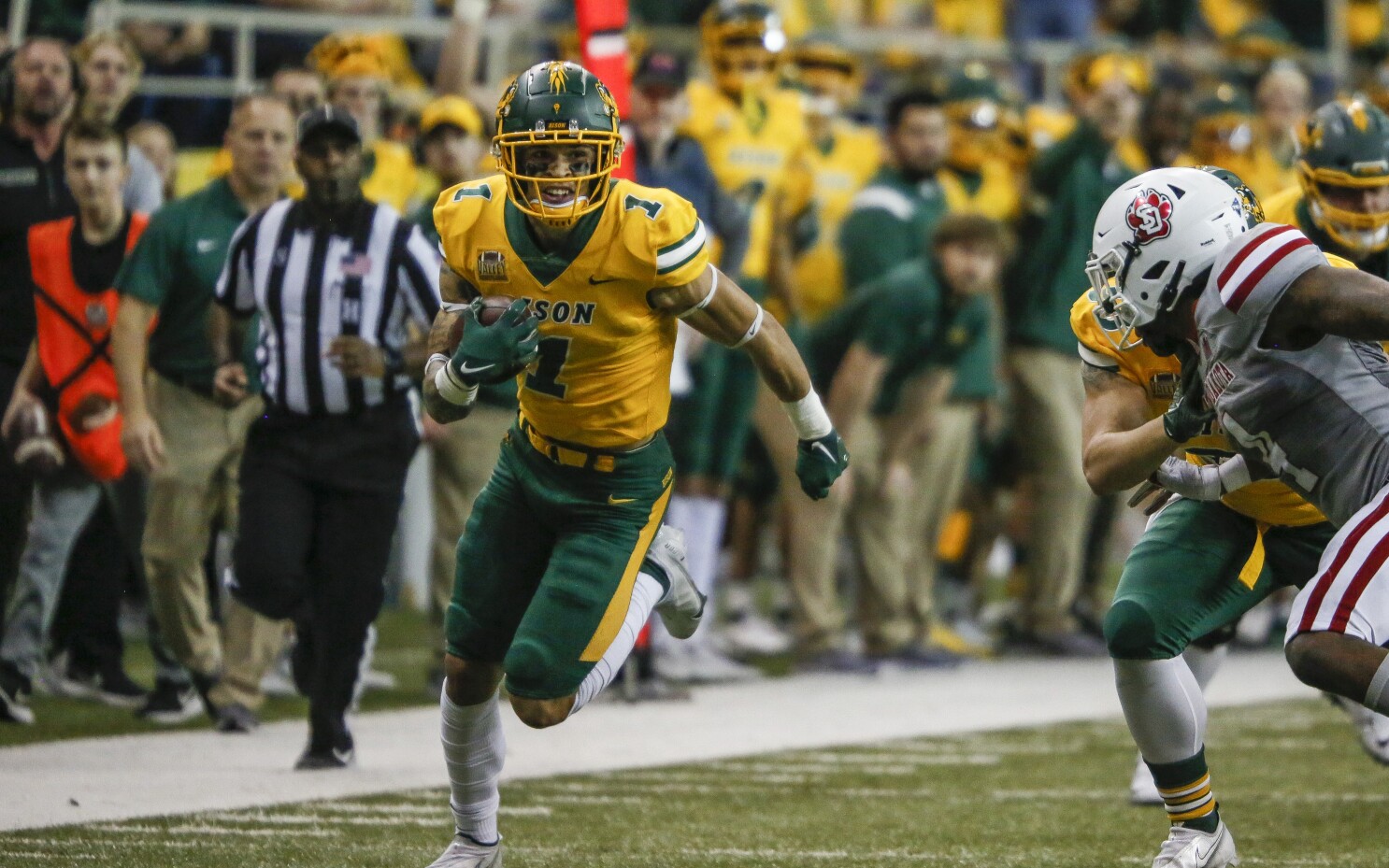 Photo by Alyssa Goelzer-The Forum
There wasn't an offensive weapon at the Senior Bowl who boosted their draft stock quite like Christian Watson and NFL teams have surely taken notice of the North Dakota State receiver after a stellar performance in practices and in game as well as checking off the boxes with his measurements. At 6'4" and 211 lbs., Watson brings excellent size, outstanding athleticism, and exceptional playmaking ability that has teams excited about his potential. Christian Watson is a beast of a receiver prospect whose athleticism prowess and overwhelming physicality made him such a monster on the outside. Watson is a creative route-runner who wins with his athleticism and size over highly technical route-running and he has the quickness and agility to certainly become a very good route-runner. He possesses a good sized route tree that sees him run all sorts of routes and he's proven himself to be Watson is a very difficult receiver to attack in press coverage as he possesses plenty of power in his frame to easily work through his opponent and get open quickly. He has tremendous hands with a very big catch radius and has found success snagging footballs away from his frame with his huge catch radius. He has shocking run after catch ability and he knows how to use his phenomenal athleticism and powerful frame to rip through the defenses which North Dakota State gave him plenty of opportunities to make plays. He's extremely good at breaking tackles and making defenders miss and offensive coaches are going to fall in love with his ability to create plays anywhere on the field. He's an excellent contested catch receiver whose size, athleticism, and elite leaping ability make him a dangerous player to leave 1-on-1 in the red zone. He's been used in the slot as well as on the outside and even is their number one option on trip plays like sweeps and end-arounds which shows his high level of versatility and football IQ. He's been highly productive at North Dakota State despite being a run heavy offense for most of his career and it goes to show just how good he is when given opportunities. He plays with exceptional toughness and competitive rage and when he gets an opportunity to make a play for his team he consistently makes the most of it.

He's a work in progress as a route-runner and with his size and build he may never be an excellent route-runner in his career with his build. He relies too much at times on his athleticism and size to make plays and while that certainly has allowed him to bully corners for the Bisons, NFL corners are going to be a learning curve for him. His separation at the top of his routes needs to be improved still despite much improvement in this area in 2021 as his ability to come down with contested catches in the NFL will certainly be tested. He played against lesser competition at North Dakota State where his raw athleticism and power often overmatched his opponents with much nuance or struggle and it could be a big leap for him once he gets to the NFL and has face off against NFL corners that can match up with his physical prowess.

Christian Watson could sneak his way into Day 1 with a great combine and pro day as his potential as an offensive weapon is starting to get noticed by NFL teams. Watson's athleticism and size are enticing enough for teams to draft but when you add his playmaking ability and versatility you have a prospect with an incredibly high ceiling. While you have to take into account his competition in college and his raw technique at the position, you can't deny that he's a playmaker and teams that need some juice on offense late in the draft should have high on their big board.