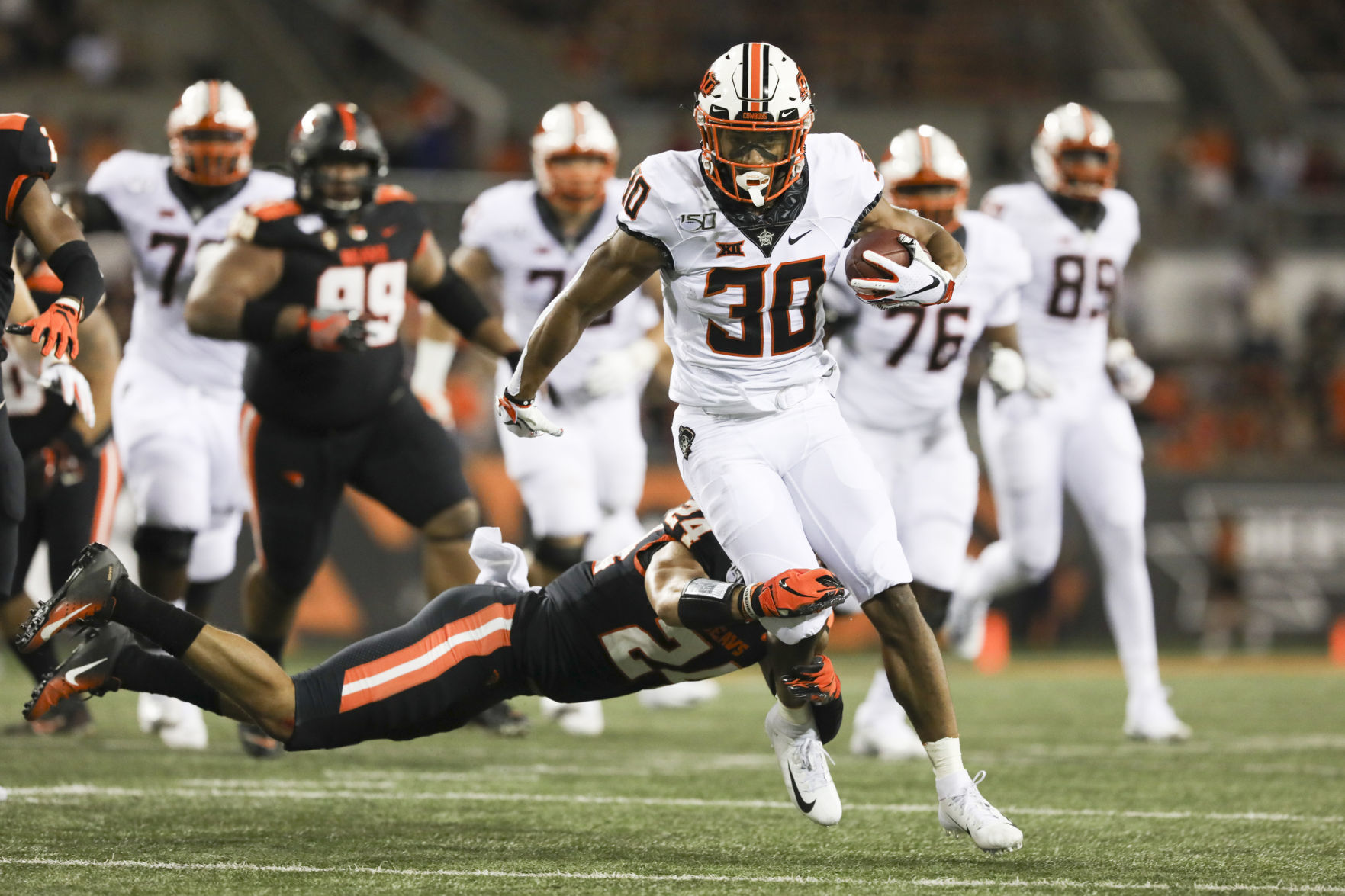 Chuba Hubbard was an unknown running back last for the Oklahoma State Cowboys but really came into his own last year leading the nation in rushing yards. Chuba Hubbard probably has the best ball carrier vision between the tackles in the entire draft class with most of his long touchdown runs coming from lanes opened up between the guard and center. He possesses very good agility and balance in his feet to change direction quickly and make a move in limited space. He's a patient running back when the trenches get muggy and always seems to pick the right hole to run through and pick up the most yards. He's got extra gear to break away from defenders and knows how to beat tacklers with angles when in the open field. He's not exactly on a potent passing offense with lots of offensive pieces around him which means he faces 7 to 8 man boxes almost every play. He's a tough running back who is willing to run into the teeth of a defense and pick up short yardage on goal line situations. He can push a pile when extra yards are needed. His bad offensive line forces him to bounce runs outside a lot and cause him to do a lot of cutbacks which shows his great decision making when the offense breaks down. He has shown the capability of handling the responsibilities of being a bell cow back and should be considered by teams as 20-25 touch players. Plays with excellent pad level and leverage and always seems to fall forward when tackled. Excellent balance in his feet when juking defenders and does a great job keeping his feet when being tripped up by defenders. He's ultra -competitive and plays with an excellent motor. He has an effective stiff arm that he uses to keep his distance from defenders rather than plow them into the ground. He rises to the occasion against better opponents and brings a consistency to the game of football that coaches and players love in a back. I love his leadership qualities as a player after the incident involving his coach and I'm sure teams are going to put that down as a plus.

He doesn't have exceptional size at 6'1" and 207 lbs. or athleticism for the position which shows up on tape when he has to break a run outside on a pitch. He hasn't been a consistent threat as a receiver out of the backfield and will need to display more ability catching the football. He gives an effort when blocking but his technique is bad and he can make late decisions when picking up blitzers. He hasn't had enough explosive plays on outside runs but that could be due to offensive line play. Played in a spread offense scheme that allowed him to take advantage of 4-5 manned boxes.

Chuba Hubbard has been a stat machine for the last two seasons and if put into an offensive system that features spread out receivers, he could thrive early. His scheme dependency may cost him a bit in the draft but he has a great chance of ending up on a team that can utilize his skills to the fullest.