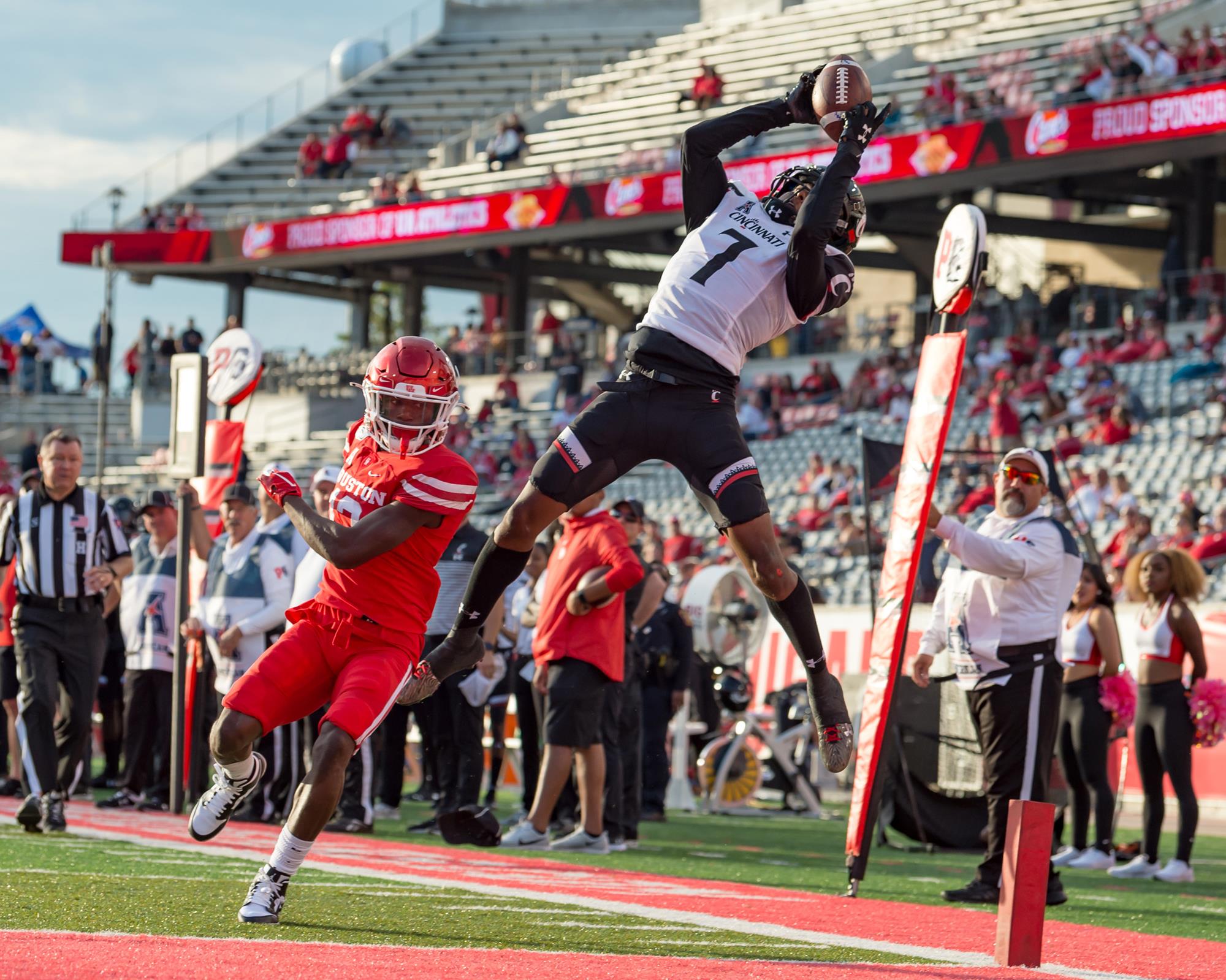 Photo by Maria Lysaker-USA Today Sports
The Cincinnati Bearcats miracle run into playoff contention ended in Dallas playing against the vaunted Crimson Tide and while the defense was lead by Ahmad Gardner, his counterpart on the other side in Coby Bryant had himself a phenomenal season as well.  At 6'1" and 200 lbs., Bryant brings excellent athleticism, length, and technique to the outside cornerback position. He and Ahmad Gardner formed the best cornerback tandem in college football as teams both in their conference and outside of it rarely ever tested either cornerback on the outside and more often than not tried to simply run for a majority of the game. In man coverage, he plays with exceptional technical prowess starting at the snap with his aggressive jam at the line, forcing receivers to make up ground early their route. He plays with exceptional footwork and fluidity in man coverage which allows him to stick to his receiver in coverage without grabby ands potentially forcing interference calls. His backpedal is fast and technically sound and he's very good at flipping his hips and running with receivers downfield. He's very patient in coverage not allowing himself to bite on double moves or sluggo routes which makes quarterbacks throwing into his area headaches with his ability to keep pace and blanket his man. He's explosive and agile in his lower has very quick reaction timing to shallow crossing routes and quick slants. He's a twitchy corner when he sees a potential pick opportunity and does time his jumps on route very well. His exceptional arm length comes in handy in man coverage with ability to reach into the catch point of the receiver and punch out catches for incompletions as well as shrinking catching windows for quarterbacks on the outside. When he gets beat he displays very good recovery speed to get back into position. He's very aggressive when asked to play man coverage due to his well built and powerful frame at the cornerback position which allows him to bully receivers off routes and force them to work harder to get in position, often forcing the quarterback to look elsewhere if they take to long to get their spot. He's good on sideline throws at squeezing the landing for the receiver, often resulting in very difficult catches when it comes to landing feet in bounds. He matches well against bigger receivers in coverage with his own size and athleticism being equally difficult for receivers to deal with. One of things I like to see form corners is then positioning themselves to pick off passes rather than attacking the football and Coby Bryant on multiple occasions the last couple seasons has beautifully ran under passes and caught them as if he was the receiver. In zone coverage, he's very twitchy and has good range to cover a large area. He's very good at route recognition at the snap and does a nice job of limiting false steps in coverage. He times his jumps very well in zone with active hands when attacking the catch point and scaring quarterbacks from trying him in coverage. He possesses exceptional ball skills with great hands and timing to high point footballs. If he doesn't get the ball, he's a very scrappy and aggressive corner on contested catches and was exceptional in 2021 at dislodging catches in the air for defended passes. He's one of the better cornerbacks in college football at dislodging the football for fumbles with his accurate punches when tackling. He won the Jim Thorpe award for the nations best defensive back in college football for his outstanding year for Cincinnati and that's in a deep class of cornerback prospects. He and Ahmad Gardner held Bryce Young to 181 yards an 60% and while he did throw three touchdowns in the Cotton Bowl most of his throws and success came from his slot receiver and tight ends, although Alabama did run for over 200 yards against the Cincinnati defensive line, but the fact that Alabama was relatively afraid to test Gardner and Bryant deep on the outside is a testament to their abilities. Bryant's technical prowess and well polished game shows a player that possesses a great work ethic and a high football IQ for the position and should be a great addition to an NFL roster on draft day. He's a highly competitive player who draws inspiration from the man he's named after in the late great Kobe
Bryant and plays with the "Mamba Mentality, that Kobe preached and lived, a very good mentality to have when you a corner on the outside in a 1-on-1 scenario like a basketball player.

Ahmad Gardner was the best cornerback on that roster and when he and Coby Bryant would line up on defense, Coby Bryant would take the #2 receiver most of time and while that doesn't diminish his performance in anyway, it does show that he benefited from having Gardner constantly take the opposing teams #1 receiver out of the game. When you play alongside Ahmad Gardner in the AAC which is a conference that rarely features top NFL draft prospects like Power 5 conferences like the Big-10, Big 12, SEC, ACC, or Pac-12, your level of competition throughout the season does diminish your production slightly. He's a work in progress as a tackler especially when he need to wrap up and take a ball carrier head on. He's more or missile when he attempts to bring down ball carriers which often results in broken tackles and his angling when trying make tackles needs to improve. He tends to try and wrap up the legs of ball carriers when tackling head on which can result in major yards after contact or potentially getting hurdled. He's strictly an outside cornerback as Cincinnati rarely, if ever, gave him snaps at safety or in the slot which doesn't give him much value from a versatile stand point. Not much of a blitzer from the cornerback position and probably won't be in his NFL career.

The more I watched film of his counterpart in Ahmad Gardner the more Coby Bryant caught my eye as a player with his playmaking ability and solid coverage skills. I know he played second fiddle to Ahmad Gardner, he certainly held his own as he was targeted more due to the success of Gardner. If he can clean up his tackling technique and become much tougher when taking on ball carriers head on, he'll be a very good NFL pro. Because he was the #2 corner on a non-power 5 scholl he'll probably get looked over which will open the door for a team to grab a steal late in the draft. He proved himself to be a highly reliable and highly productive #2 corner college and I believe he has the physical traits and mentality to be #1 corner on an NFL team. He's a Day 1 starter at cornerback in the NFL who could transition into a #1 by his second year and could earn himself a pro bowl nod if he continues to improve his game with his ceiling.