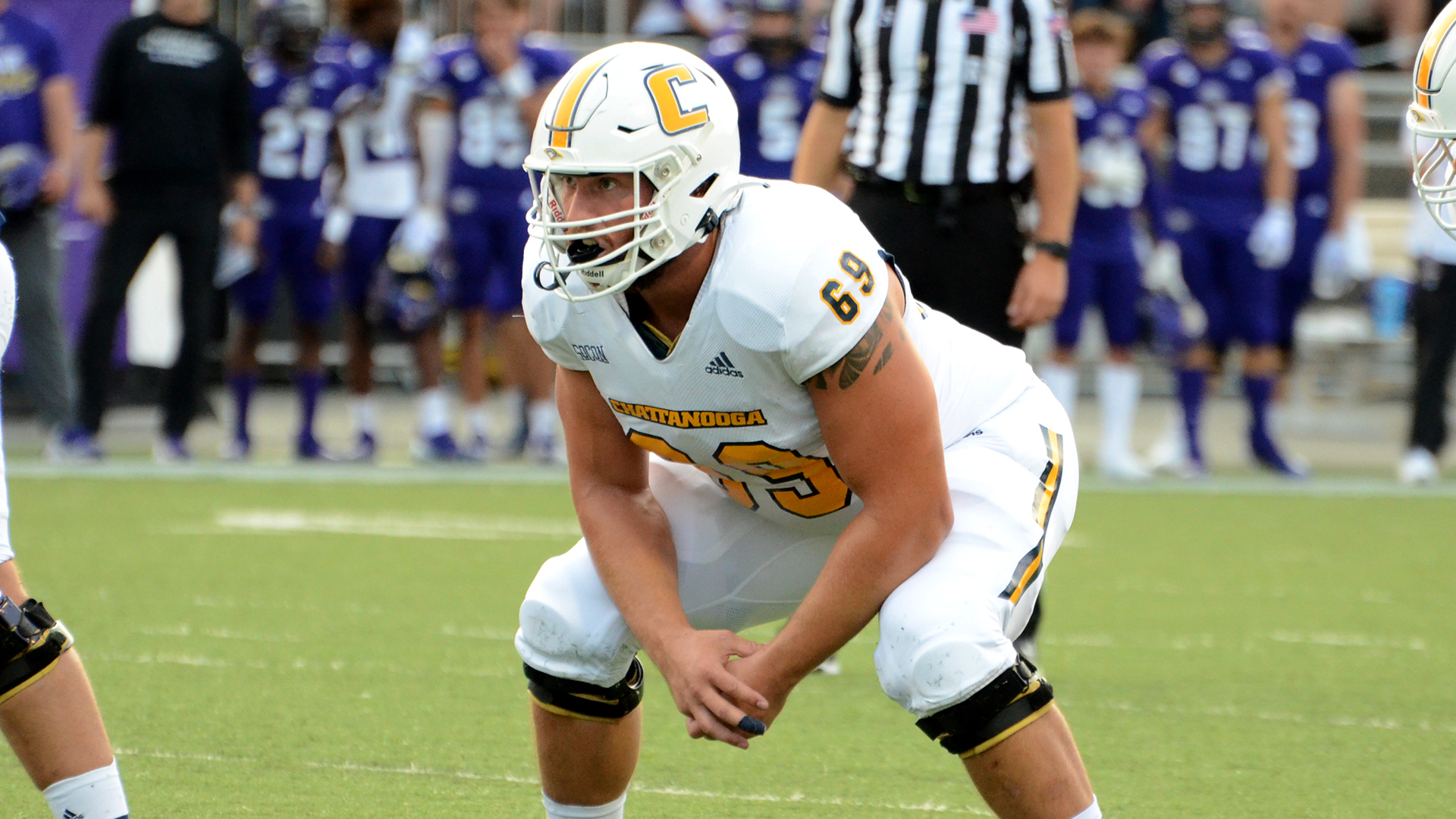 Photo via gomocs.com
Chattanooga University is rarely associated with quality football talent outside Hall of Fame wide receiver Terrell Owens but Cole Strange throughout the draft process has shown teams that he's immense potential talent as an interior lineman in the NFL. At 6'6" and 305 lbs., Cole Strange possesses tremendous athleticism, great length for the position, immense power throughout his build, and a nasty streak that doesn't quit. In pass protection, he does a tremendous job of widening his at the snap to mitigate any potential bull rushes as well as allow him exceptional quickness and reactive timing in the gap. When he's bull rushed he does a great job of bringing his hips forward and planting his feet to force his opposing lineman upward to stymie his impending rush. He has a very powerful upper body as evidenced by his 31 bench press reps with 33 inch arms and he knows how to use them in pass pro. His punches off the line when they land perfectly can rock defensive tackles upwards or sideways and end rushes very quickly. He has vice grips for hands that are unbreakable once he gets them into his opposing lineman's chest and he knows how to thrash and twist his unfortunate defender around to extend his time pass blocking effectively. He has very good power at the point of attack in pass protection and rarely is knocked off the line early in his sets. He has quick and choppy feet to move in his gap and did a phenomenal job in 2021 of cutting off and often smacking incoming blitzers entering his gap. He's excellent at recognizing blitzers pre-snap and knows how to make his blocks and then disengage to neutralize impending defenders. He brings the pain when he makes contact with blitzers attacking his gap and has pancaked more than a few trying to test him. As a run blocker, he plays with a nastiness that has been very difficult for defensive lineman to deal with and it wears them down considerably throughout a game. He comes off the line with great pad level for his size and the immense power in his frame allows him to make quick work of the lineman in front of him. He drives lineman off the ball with great leg drive from his wide base and doesn't let up in his mauling for a second. He can collapse the trenches when driving to his right side and is a great teammate to have on double teams. He can reach the second level with ease and when he can make contact with linebackers and safeties he can flatten them in the run game. He's capable of leading a convoy in the run game and has done so consistently for his offense. He's extremely competitive and tough and his performances against tougher opponents are often exceptional. He's started 44 games in his Chattanooga career and is regarded as the best offensive lineman to come out of the program ever.

He'll be a 24 year old rookie in 2022 and although teams will likely look past his age, it does give me worries about his potential longevity and developmental speed in the NFL. He would benefit from adding more mass to his frame despite his muscular build because in instances against bigger defensive tackles that have around 20-30 lbs. on him he got walked back into the pocket on a consistent basis. His blocking angles need considerable work as he struggles to make blocks on occasion in the second or on screen plays and learning to not be so straight-line when initiating blocks will help his career. Pull blocking has been an issue for him on occasion with his inconsistent angles as a run blocker can miss open field blocks with his eagerness to blow up defenders. He could use some more power in his base because at times he struggles to drive defensive tackles off the line of scrimmage when they have more of a size advantage both with pad level of mass. He's strictly been used at left guard in his career and when asked to play a different position on the line he seems to struggle which limits his versatility. Chattanooga doesn't play many Power 5 Schools so most of his highlights have come from lesser competition despite his success against better competition.

He's a nasty and physically imposing left guard prospect that won quite a few fans on NFL coaching staffs with his play at the Senior Bowl and performance at the NFL combine. He's a technically sound guard prospect with exceptional power and athleticism and if teams can get over his age and build, they'll be getting a high quality NFL starter on their offensive line. If he can pack on some more weight, in the form of muscle, he could be a special player in the NFL.